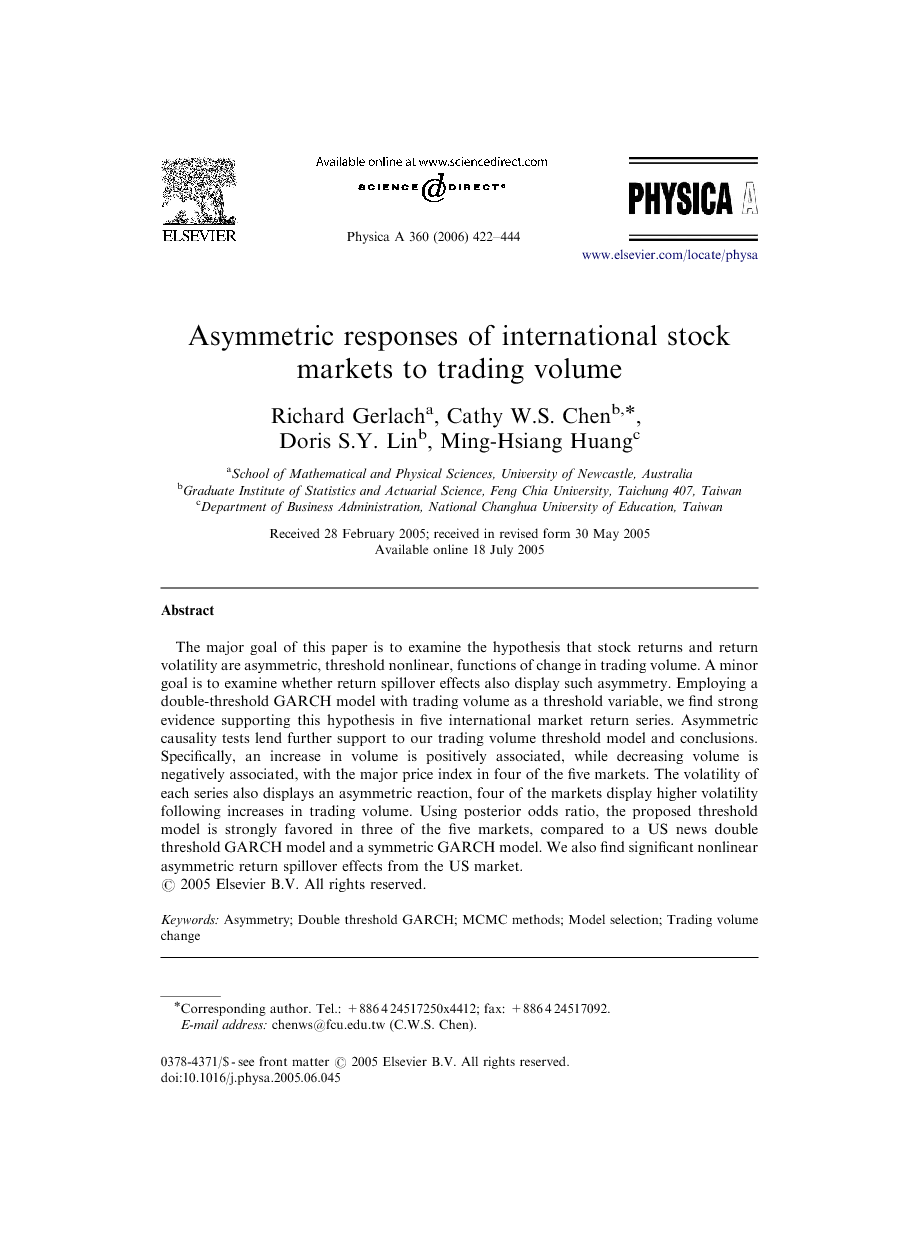 The major goal of this paper is to examine the hypothesis that stock returns and return volatility are asymmetric, threshold nonlinear, functions of change in trading volume. A minor goal is to examine whether return spillover effects also display such asymmetry. Employing a double-threshold GARCH model with trading volume as a threshold variable, we find strong evidence supporting this hypothesis in five international market return series. Asymmetric causality tests lend further support to our trading volume threshold model and conclusions. Specifically, an increase in volume is positively associated, while decreasing volume is negatively associated, with the major price index in four of the five markets. The volatility of each series also displays an asymmetric reaction, four of the markets display higher volatility following increases in trading volume. Using posterior odds ratio, the proposed threshold model is strongly favored in three of the five markets, compared to a US news double threshold GARCH model and a symmetric GARCH model. We also find significant nonlinear asymmetric return spillover effects from the US market.

In this paper, we have thoroughly examined the empirical dynamic relationship between stock return, return volatility, international return spillover and change in trading volume for five international stock markets. Conforming to well-established empirical results, stock returns and return volatility display a certain degree of persistence and consistent with a meteor-shower hypothesis, our empirical results suggest that the stock-return news developed from US is transmitted significantly to each of the five national stock markets. In particular, the US return-news is positively correlated with the stock price of each national market but this correlation is asymmetric around a threshold US return value and/or a value of trading volume change. This confirms the minor goal of this paper. The major issue of this study has been whether stock returns and return volatility react asymmetrically, in a threshold nonlinear fashion, to trading volume change. By employing a double-threshold GARCH model to capture the nature of market reaction to trading volume change, we find that a large increase in volume is accompanied by a large rise in average stock price, while a decrease in volume is associated with lower average returns, with the exception of Thailand. Moreover, the return volatility of all the stock-markets also displayed an asymmetric reaction to volume change, around a threshold level. With the exception of Taiwan, the average magnitude of return volatility following an increase in trading volume was much larger than that following decreases in volume. Our model comparison results revealed that the asymmetric nonlinear model, with change in volume as a threshold, was decisively favored in the three Asian markets: Taiwan, Thailand and South Korea. However, the DT-GARCH model of Chen et al. [13], with US return news as threshold variable, was favored in UK and France. In summary, our findings are consistent with, and add to, the arguments of Ying [24], Karpoff [25] and Gallant et al. [43]: that the joint study of stock price and trading volume, as an asymmetric nonlinear relationship, leads to a better understanding of capital market behavior. These findings shed new light on the application of trading volume in the market integration literature and develop a new avenue for asset pricing in a multi-market framework.