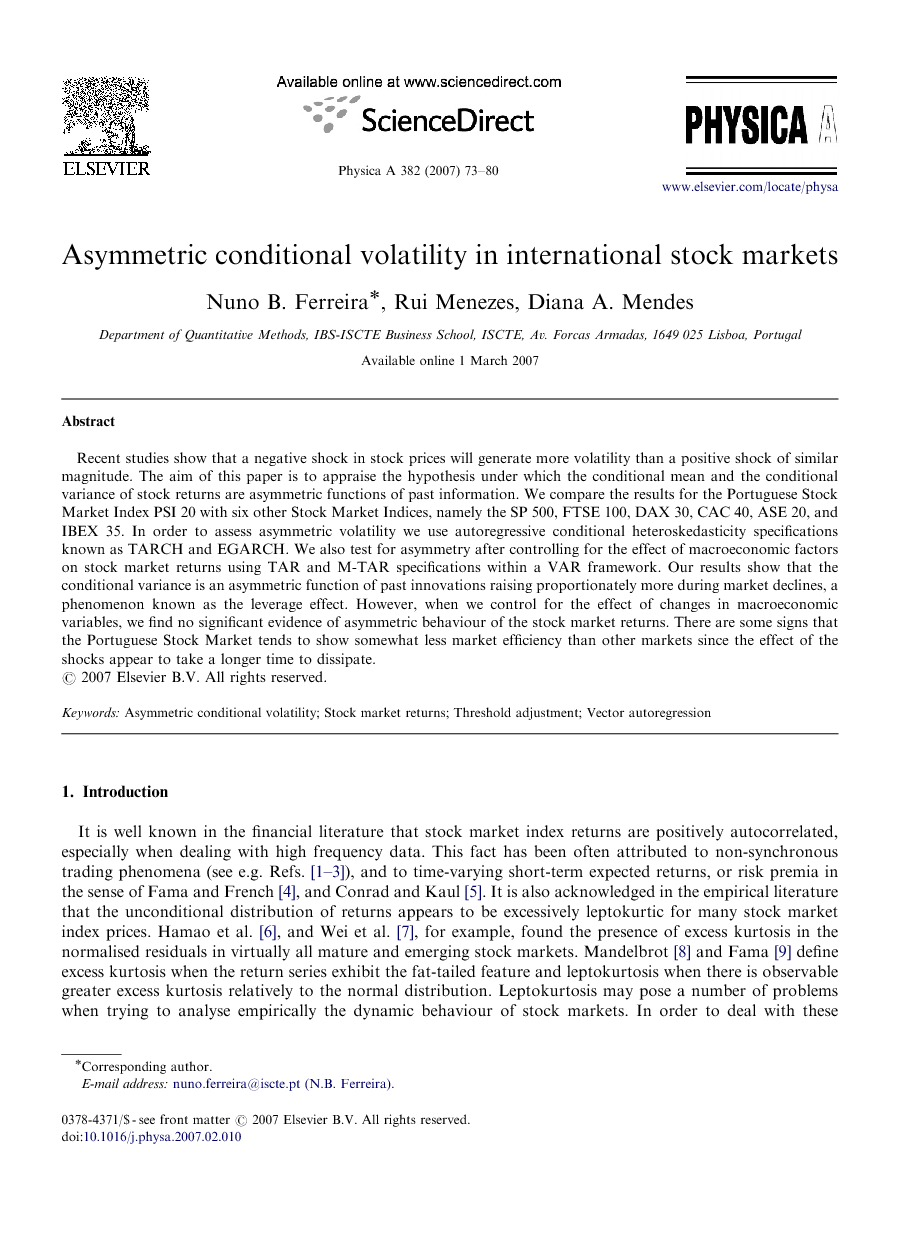 Recent studies show that a negative shock in stock prices will generate more volatility than a positive shock of similar magnitude. The aim of this paper is to appraise the hypothesis under which the conditional mean and the conditional variance of stock returns are asymmetric functions of past information. We compare the results for the Portuguese Stock Market Index PSI 20 with six other Stock Market Indices, namely the SP 500, FTSE 100, DAX 30, CAC 40, ASE 20, and IBEX 35. In order to assess asymmetric volatility we use autoregressive conditional heteroskedasticity specifications known as TARCH and EGARCH. We also test for asymmetry after controlling for the effect of macroeconomic factors on stock market returns using TAR and M-TAR specifications within a VAR framework. Our results show that the conditional variance is an asymmetric function of past innovations raising proportionately more during market declines, a phenomenon known as the leverage effect. However, when we control for the effect of changes in macroeconomic variables, we find no significant evidence of asymmetric behaviour of the stock market returns. There are some signs that the Portuguese Stock Market tends to show somewhat less market efficiency than other markets since the effect of the shocks appear to take a longer time to dissipate.

It is well known in the financial literature that stock market index returns are positively autocorrelated, especially when dealing with high frequency data. This fact has been often attributed to non-synchronous trading phenomena (see e.g. Refs. [1], [2] and [3]), and to time-varying short-term expected returns, or risk premia in the sense of Fama and French [4], and Conrad and Kaul [5]. It is also acknowledged in the empirical literature that the unconditional distribution of returns appears to be excessively leptokurtic for many stock market index prices. Hamao et al. [6], and Wei et al. [7], for example, found the presence of excess kurtosis in the normalised residuals in virtually all mature and emerging stock markets. Mandelbrot [8] and Fama [9] define excess kurtosis when the return series exhibit the fat-tailed feature and leptokurtosis when there is observable greater excess kurtosis relatively to the normal distribution. Leptokurtosis may pose a number of problems when trying to analyse empirically the dynamic behaviour of stock markets. In order to deal with these problems, several authors have attempted to use more general formulations of the distributions used in empirical work (see for example [8], [9] and [10]). However, the subject appears to be far from solved in a totally satisfying manner. There are several papers that are studying these topics by applying different ideas and techniques [11], [12], [13], [14], [15], [16], [17], [18], [19] and [20]. Another issue obviously related to the previous one concerns the fact that short-term stock returns usually exhibit volatility clustering. Links between information and volatility of financial assets are, of course, also central to financial economics. Ross [21], for example, argued that volatility could be regarded as a measure of the information flow. Moreover, as noted above, empirical researchers also report significant relationships between flows and volatility. Volatility clustering and excess kurtosis may arise in the context of asymmetric behaviour of price index movements or their corresponding returns. Such asymmetry may depend on other economic and financial factors or simply be the result of the time-path behaviour of the price index series itself. In the latter case, the conditional variance may be an asymmetric function of past innovations raising proportionately more during market declines. This means that changes in stock prices or returns tend to be negatively related to changes in volatility (see e.g. Refs. [22] and [23]), i.e., the so-called leverage effect, where stock price declines increase the financial leverage and, consequently, the degree of risk (volatility). Authors such as Engle [24], inter alia, defend the idea that financial market volatility can be predictable. In order to forecast the volatility, several methods have been proposed in the specialised literature, many of which are based on regression-like models. Clearly, the classical regression model is unsuited when the residuals exhibit features that depart from the basic OLS assumptions. Non-normality, autocorrelation, and heteroskedasticity are some of the problems that are typically present in this type of data. In order to deal with the problems of autocorrelation and heteroskedasticity, ARCH/GARCH specifications are usually well suited. However, they assume that the conditional variance has a symmetric behaviour and thus may not fully capture the issues of non-normality. In our context, we shall use threshold ARCH (TARCH) and exponential GARCH (EGARCH) model specifications to assess the extent of non-linear dynamic behaviour underlying the stock prices data of various markets. The models used in this paper belong to special classes of non-linear models that usually generalise the more traditional autoregressive conditional heteroskedasticity (ARCH) models. ARCH models have been used quite frequently in applied financial research work. Among the most popular extensions are the TARCH model proposed by Zakoian [25] and Glosten et al. [26], and the EGARCH model proposed by Nelson [10]. Engle and Ng [27] indicate that these latter volatility models usually outperform standard generalised ARCH (GARCH) models. An alternative way for modelling the volatility of stock market returns is based on a vector autoregressive (VAR) specification using other variables that may help to explain the behaviour of financial markets. In this context we could observe e.g. Refs. [28], [29] and [30]. A VAR system is a reduced form model that accounts for the effect of lagged values of the endogenous variables on the dynamic behaviour of the whole system. Each variable is specified as a function of the past values of the other (endogenous) variables but does not depend on their contemporary values. VAR models are well suited to deal with situations where an error correction mechanism (ECM) can describe the behaviour of the system. In this case, a corresponding vector error correction model (VECM) can be specified and fully estimated using ML procedures. This is important when one needs to separate the long-run and short-run components of the dynamic mechanism. However, there are several criticisms with respect to VAR models. One is the likely loss in efficiency due to lack of a priori information. Another problem relates with the large number of parameters to be estimated as the dynamic structure of the system increases. This is especially relevant for small data sets. Other problems may arise when dealing with impulse response analysys. Since stock market returns and other macroeconomic variables may all be endogenous in the system, the VAR specification is a quite satisfactory way for modelling the volatility. Testing for asymmetries in this context entails the use of TAR and M-TAR tests of the VAR residuals (see e.g. Refs. [31] and [32]). It is important, therefore, to obtain comparative results of the relative performance of these two alternative types of volatility models, and this is the main aim of the present paper.