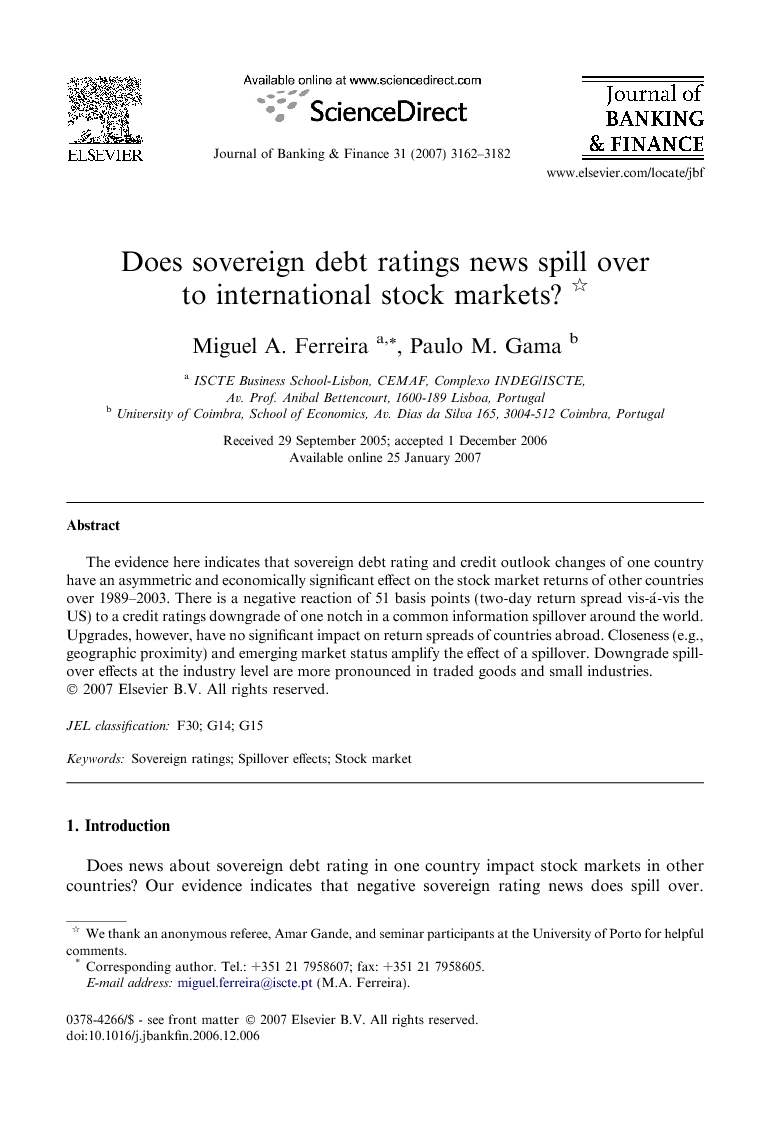 The evidence here indicates that sovereign debt rating and credit outlook changes of one country have an asymmetric and economically significant effect on the stock market returns of other countries over 1989–2003. There is a negative reaction of 51 basis points (two-day return spread vis-á-vis the US) to a credit ratings downgrade of one notch in a common information spillover around the world. Upgrades, however, have no significant impact on return spreads of countries abroad. Closeness (e.g., geographic proximity) and emerging market status amplify the effect of a spillover. Downgrade spillover effects at the industry level are more pronounced in traded goods and small industries.

Does news about sovereign debt rating in one country impact stock markets in other countries? Our evidence indicates that negative sovereign rating news does spill over. We focus on the cross-country stock market reaction to Standard & Poor’s (S&P) announcements of a sovereign credit rating or credit outlook change. There is published research on this question. Brooks et al. (2004) study the own-country stock market impact of sovereign debt rating changes. They find that sovereign rating downgrades have a negative impact on the re-rated country’s stock market (one-day abnormal returns of 197 basis points), but upgrades have an insignificant effect. Gande and Parsley (2005) find asymmetric international spillover effects on sovereign debt markets. Downgrades abroad are associated with a significant increase in sovereign bond spreads (12 basis points), but upgrades have an insignificant effect. Kaminsky and Schmukler (2002) show that emerging market sovereign rating news is contagious for bond and stock markets in emerging markets, particularly during periods of turmoil and particularly for neighboring countries. The empirical question we address is whether sovereign rating news of one country is also relevant for other countries’ stock markets. If market players see rating changes as a country-specific issue with no implications beyond country borders, little information impact would be expected. At the same time, either rational behavior due to liquidity constraints or irrational herding of investors and financial and real sector linkages across countries can act as transmission vehicles for country shocks (Dornbusch et al., 2000 and Karolyi, 2003). We extend the Gande and Parsley (2005) findings by investigating information spillover not only across countries but also across markets. That is, we focus on spillovers of credit rating or outlook of one country (the event country) to stock market return spreads (the return differential vis-á-vis the US) of all other countries (the non-event countries). We consider a large set of countries, including not only emerging markets (18 countries) but also developed markets (11 countries), representing stocks totaling USD 4.9 trillion of market capitalization in 2002. We explicitly control for recent rating activity worldwide. We characterize the spillovers in economic terms, i.e., by including controls for capital flows and level of economic and financial development. We also present several new results regarding cross-country and cross-market news spillover at the industry level. The evidence with regard to industry portfolios is of particular interest, given increasing investor perception that industry factors are becoming more important than country factors in explaining stock returns (see, for example, Cavaglia et al., 2000). A sovereign credit rating represents a rating agency assessment of the capacity and the willingness of a sovereign obligator to meet its debt service payments in a timely fashion. They are understood by rating agencies as a forward-looking estimate of default probability; see Standard & Poor’s “Sovereign Credit Ratings (2005)”. In most cases, the sovereign ceiling doctrine applies; that is, the rating assigned to non-sovereign debt issues (or issuers) is the same as or lower than the rating assigned to the sovereign of the country of domicile. Thus, sovereign rating revisions also relate to non-sovereign debt instruments (Radelet and Sachs, 1998 and International convergence, 2004).1 The stock market should be expected to react to a sovereign rating downgrade because a downgrade can affect a country’s ability to borrow in international markets, and thus contribute to a credit crunch, which negatively impacts the stock market. Other mechanisms as well reveal a link between sovereign rating and stock markets. Sovereign rating can provide information on the future economic health of the rated country that is not otherwise available to stock market participants, and governments can take policy actions that directly affect companies’ future prospects (e.g., raising corporate taxes to compensate for increased debt service following a downgrade). Moreover, because many institutional investors can hold only investment-grade instruments, rating downgrades and (upgrades) may have a negative (positive) impact on security prices. Our work is related to the literature on stock and bond market correlation. Campbell and Ammer (1993) show that stocks and bonds react in the same direction to news about fundamentals, with the exception of news about inflation. Other evidence on low (or even negative) stock-bond correlation is inconclusive as to the expected direction of the reaction to a rating revision (Connolly et al., 2005). At the corporate bond level, there is theoretical support for both a positive and a negative reaction to corporate bond rating downgrades; see, for instance, Zaima and McCarthy (1988). Our major findings can be summarized as follows. First, we find rating changes in one country incorporate valuable information for the aggregate stock market returns of other countries. The spillover effect is asymmetric, both in direction of the reaction and in terms of economic impact. A one-notch rating downgrade abroad is associated with a statistically significant negative return spread of 51 basis points on average across non-event countries. No significant impact is found for rating upgrades. Second, controlling for time-invariant characteristics that proxy for underlying similarities between countries affects the asymmetric nature of spillovers. We control for the cultural, regional, and institutional environment as well as level of economic and financial development. We find that geographic distance is inversely related to the spillover impact. This is consistent with the hypothesis that rating news has a more pronounced effect in countries nearby where the information asymmetry is moderated. We also find that the downgrade impact is more pronounced in emerging stock markets. This is consistent with the hypothesis of a more pronounced common information spillover across emerging markets. Finally, we show that rating downgrades also have a significant effect on local industry portfolio return spreads. Sovereign rating downgrades abroad are associated with a highly statistically significant negative two-day return spread of industry portfolios vis-á-vis their counterpart industry in the US. The negative effect of downgrades is pervasive across industries, but it is more pronounced in traded-goods and small industries.

We ask whether a sovereign rating change (an implemented change or credit outlook/ watch move) for a given country impacts stock market returns in other countries. As with own-country stock market reaction to rating changes, the evidence reveals asymmetric spillovers. Ratings upgrades abroad have no discernible impact on stock market return spreads, but rating downgrades are associated with an economically and statistically significant negative return spread. This suggests that only downgrades abroad convey information to stock markets.These findings are robust to control variables that proxy for possible linkages across markets, crisis periods, the nature of affected markets, the currency in which returns are measured, and to differences in the industrial structure of countries. Furthermore, we find that geographic distance is inversely related to the spillover impact. This is consistent with the hypothesis that rating news has a more pronounced effect in countries nearer to each other, where there is less information asymmetry. We also find that a country’s status as an emerging market is positively associated with the downgrade impact. Rating downgrades have a greater economic impact for large-country events, small industries, and industries with considerable foreign exposure (traded goods industries).