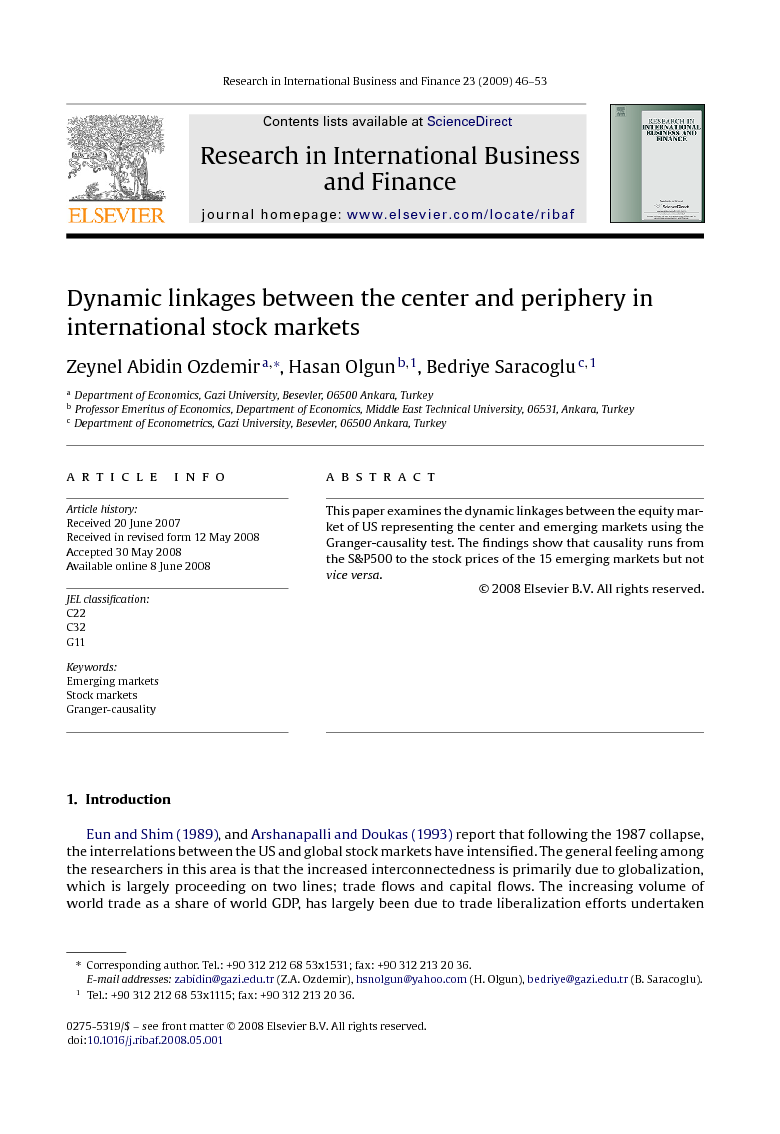 This paper examines the dynamic linkages between the equity market of US representing the center and emerging markets using the Granger-causality test. The findings show that causality runs from the S&P500 to the stock prices of the 15 emerging markets but not vice versa.

Eun and Shim (1989), and Arshanapalli and Doukas (1993) report that following the 1987 collapse, the interrelations between the US and global stock markets have intensified. The general feeling among the researchers in this area is that the increased interconnectedness is primarily due to globalization, which is largely proceeding on two lines; trade flows and capital flows. The increasing volume of world trade as a share of world GDP, has largely been due to trade liberalization efforts undertaken both by developed and developing countries. Similarly, capital flows among countries have also been increasing pari-pasu with the liberalization of capital accounts and the elimination of foreign exchange controls by developing countries. Capital flows between the capital-exporting and importing countries give rise to a kind of linkage whose nature has not yet been clearly understood (see Berument et al., 2006). The literature on the linkages among stock markets suggests that a kind of center periphery relation is emerging on the global scene where the markets of the richest countries, such as US, are dominating its peripheries. This paper analyzes such a center periphery relation between US stock market and 15 emerging markets. It shows that there are statistically significant linkages between the S&P500 and 15 emerging equity markets. There exists a large body of the literature examining the presence of dynamic linkages between equity markets of developed and emerging markets. Some previous studies have found that international stock markets have linkages. For instance, Hamao and Masulis (1990), King and Wadhwani (1990), Kasa (1992), and Arshanapalli and Doukas (1993) have found that the equity markets of the developed countries are integrated and also the US market leads other developed markets such as Japanese and European markets. Similarly, developed markets lead emerging markets (e.g. Najand, 1996), and there are causal linkages among emerging markets (e.g. Chen et al., 2002). In addition to these studies, Cheung and Mak (1992), Liu and Pan (1997) and Wu and Su (1998) have provided evidence that both US and Japanese stock markets dominate the stock markets of the Asian countries. Similarly, Cha and Oh (2000) have concluded that US and Japanese markets have significant effects on the stock markets of Hong Kong, Korea, Singapore and Taiwan. Gilmore and McMannus (2002) have reported a correlation between the US and three Central European Markets: The Czech Republic, Hungary and Poland. Moreover, Narayan et al. (2004) have found that the stock prices of Bangladesh, India and Sri Lanka Granger-cause stock prices in Pakistan for the 1995–2001 period. Berument and Ince (2005) and Berument et al. (2006) have shown that the pattern of the effects of the S&P500 on 15 emerging markets depends on the geographical location of these markets. Different from the time series models employed in these studies and regarding the non-linear symptoms the stock price has, Ozdemir and Cakan (2007) have examined the non-linear dynamic relationships between the group of world's major stock markets (US, Japan, France, and UK) and have reported that there is a strong bi-directional non-linear causal relationship between these stock markets. Most recently, De Gooijer and Sivarajasingham (2008) have investigated long-term linear and non-linear causal linkages among 11 stock markets, 6 industrialized markets and 5 emerging markets of South-East Asia using a non-parametric test for Granger non-causality for filtered the VAR-residuals with GARCH-BEKK models for the 1987–2006 period. Their finding suggests that following the Asian financial crisis, the Asian stock markets have become more internationally integrated. On the other hand, in sharp contrast to the above studies, there are a few others concluding that there are no linkages between or among some markets. For instance, Masih and Masih, 1997 and Masih and Masih, 1999 have found cointegration relation among the stock markets of Thailand, Malaysia, the US, the UK, Japan, Hong Kong, and Singapore for the pre-financial crisis period of October 1987. However, they have not found any long-run relationships between these markets for the after-financial crisis period of October 1987. Similarly, Felix et al. (1998) have found no long-run comovement between the US and a number of emerging markets. In the same way, Byers and Peel (1993) have shown that there is no linkage between the markets of US and Europe. Moreover, Ghosh et al. (1999) did not find any effect of Japan and US on the stock markets of Taiwan and Thailand. By the same token, Phylaktis and Ravazzolo (2003) have not found dynamic interconnections among the equity markets of Pacific-Basin countries (Hong Kong, South Korea, Malaysia, Singapore, Taiwan, and Thailand) and the industrialized countries of Japan and US for the 1980–1998 period. The studies mentioned above have utilised the linear and non-linear time series models to investigate the linkages between the international stock markets. Causal linkages among stock markets have important implications in security pricing, hedging and trading strategies, and financial market regulations. What's more, these linkages signify that stock price of a country has the information to predict the stock price of another country. In this context, casualty between the equity market of US, having the biggest economy of the world, and other countries’ is of importance in that it has the information to predict the stock prices of other countries. This paper seeks to examine the bi-directional causality between the S&P500 and the stock prices of 15 emerging markets. Many of the studies into stock market interdependence have been based on the geographical groups of markets, such as the markets in Central and Eastern Europe, Latin America, and in Asian countries, whereas in this study the markets dealt with are the 15 emerging markets, which are basically of Eastern Europe, Latin America, and Asian countries origin. Hence, this study presents something different from other studies existing in terms of the number of countries and the geographical locations of the stock markets. The results lend strong support to the view that large markets dominate the stock markets of the developing countries. The rest of the paper is organised as follows. The next section describes the testing method used. The third section presents the data and empirical results. The final section concludes.

This study, has examined the dynamic linkages between the equity markets of a center (the US) and its periphery (emerging markets) using Granger-causality. Empirical results show a significant causal relation from S&P500 to all emerging stock markets included in the sample, but not vice versa. This evidence indicates that a kind of center periphery relation exist in international stock markets. This conclusion is further supported by the observation that there is no evidence in the literature suggesting an effect from the stock exchange of an emerging market to that of large market such as those of US or Japan or the large markets of Europe.