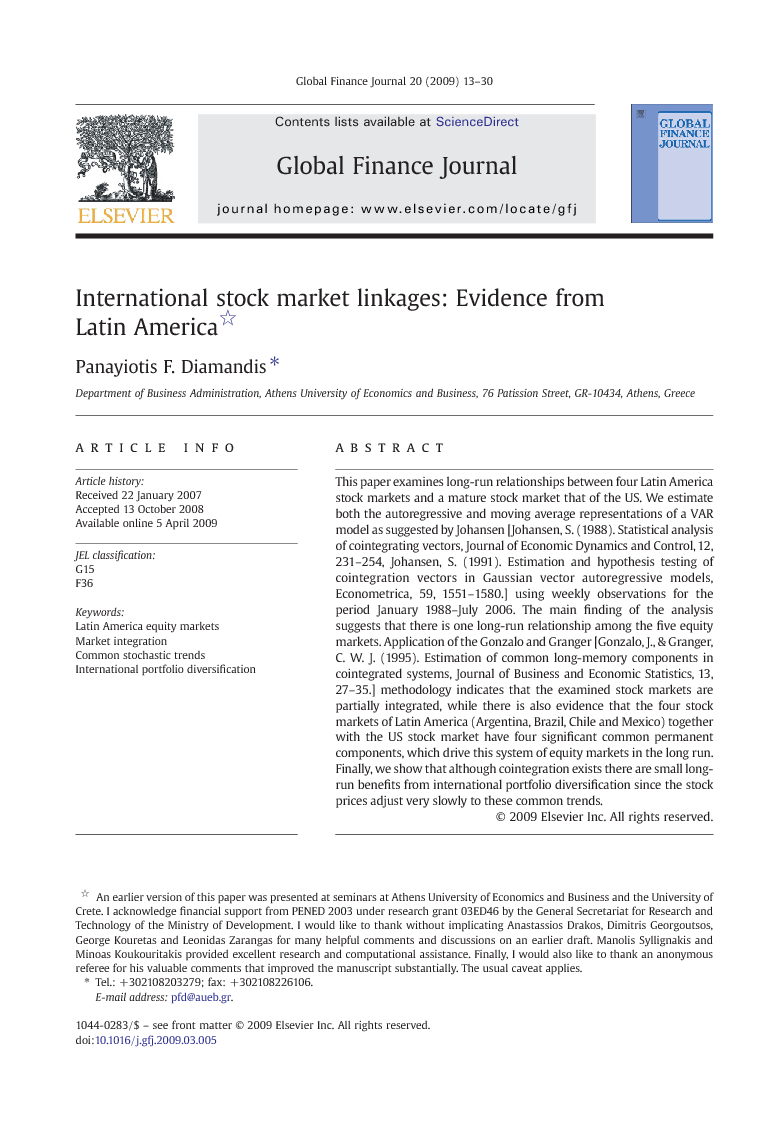 This paper examines long-run relationships between four Latin America stock markets and a mature stock market that of the US. We estimate both the autoregressive and moving average representations of a VAR model as suggested by Johansen [Johansen, S. (1988). Statistical analysis of cointegrating vectors, Journal of Economic Dynamics and Control, 12, 231–254, Johansen, S. (1991). Estimation and hypothesis testing of cointegration vectors in Gaussian vector autoregressive models, Econometrica, 59, 1551–1580.] using weekly observations for the period January 1988–July 2006. The main finding of the analysis suggests that there is one long-run relationship among the five equity markets. Application of the Gonzalo and Granger [Gonzalo, J., & Granger, C. W. J. (1995). Estimation of common long-memory components in cointegrated systems, Journal of Business and Economic Statistics, 13, 27–35.] methodology indicates that the examined stock markets are partially integrated, while there is also evidence that the four stock markets of Latin America (Argentina, Brazil, Chile and Mexico) together with the US stock market have four significant common permanent components, which drive this system of equity markets in the long run. Finally, we show that although cointegration exists there are small long-run benefits from international portfolio diversification since the stock prices adjust very slowly to these common trends.

During the last two decades following the stock market crisis of October 1987 there has been a growing interest on the interaction of international stock markets. To a great extent this has been the result of increasing policy coordination, abolition of capital controls in developed and emerging financial markets, the technological improvement in communications and trading systems as well as the development of new financial products, such as Country Funds and American Depository Receipts. These new financial products were extensively introduced by several Latin America and Pacific Basin emerging markets to provide international investors with new opportunities for investment in these economies. More important is the stylized fact that these innovative financial products are taken by many economists to be the initial step for the opening of these markets to allow capital inflows.1 An important implication of international portfolio theory is that investors would benefit through international diversification when the degree of comovements among the national stock markets is low. A great number of researchers have used alternative approaches to examine whether national stock markets exhibit similar price patterns and are converging over time or whether capital market integration is a rather elusive concept. The existing literature attempts to document evidence in favour of linkages between returns of stock indices of the major equities markets and more recently, of several emerging capital markets. In this paper we provide further analysis on the issue of international financial linkages by examining the existence of common stochastic trends between four Latin America emerging capital markets those of Argentina (ARG), Brazil (BRA), Chile (CH) and Mexico (MEX) and a mature market, namely the New York Stock Exchange (US) using weekly data for the period January 1988 to July 2006. The reason for paying attention to these emerging markets is that during the 1990s there has been an increasing flow of funds from developing countries towards these markets (BIS, 2006). Indeed, during the 1990s the opening of the economies of several developing countries and in particular those of Central and Eastern European countries, Latin America and South East Asia along with their consequent economic growth attracted the interest of international portfolio managers of American and European funds. Thus, the net private capital flows in the Latin America region was 48 billion US dollars during the 1990–1997 period, it was reduced to 37 billion US dollars during the period 1998–2002 in the aftermath of the 1997–1998 Asian and Russian financial crisis while it has increased to 47 billion US dollars in the period 2003–2005.2 The issues concerning capital markets linkages are significant for several reasons. Firstly, from a long-run perspective if there exist a comovement among the prices of national stock markets and thus these markets share a single common trend with only transitory deviations from this trend, benefits from long-run diversification will be limited. Therefore, testing for cointegration gives information of the potential for arbitrage activity in the long-run. Secondly, evidence of strong linkages among world capital markets may lead to the rejection of the efficient markets hypothesis in the framework defined by Granger (1986) who considers the incompatibility between cointegration of two or more asset prices and the fact that these prices are derived from efficient markets.3 However, today it is argued that evidence of cointegration among stock prices may not necessarily imply violation of market efficiency since the cointegration of fundamentals may also lead to cointegration among stock prices. Finally, it is important to distinguish between the issue of long-run comovements among stock indices and capital market integration. The latter describes a state where increased interdependence and policy coordination among countries exist. As Taylor and Tonks (1989) underline an implication of capital market integration is that a specific model of required returns is employed for all assets irrespective of the market they are traded in.4 Our analysis examines the financial links of these markets by estimating the autoregressive and moving average representation of a cointegrating system. Thus, following Kasa (1992) we estimate the multivariate cointegration model with the application of Johansen, 1988 and Johansen, 1991 approach. Then, we estimate the moving average representation, which allows us to provide evidence of the relative importance of each market to the common trend. We apply the Gonzalo and Granger (1995) methodology which provides the estimation of the transitory and the permanent components of each market and therefore helps us to analyze the common trend in a clear way that provides insights into the possibility of alternative results which have implications for international portfolio diversification. The main findings of this paper are summarized as follows. First, the estimation of the multivariate cointegration system leads to the conclusion that there exists one statistically significant cointegrating relationship among the five stock markets. Second, we find evidence that these financial markets have four statistically significant common permanent components, which drive the system in the long-run. Third, given that there are more common trends than cointegrating relations it is argued that there is partial integration of the four Latin America markets and that of the US, implying that there may be short-run benefits from international portfolio diversification. Fourth, we show that there are significant short-run deviations from the common stochastic trends during the 1994–1996 Mexican crisis and the 2001 financial crisis and therefore international investors could have make short-run profits based on the forecast that eventually the markets will return to their mean-reverting long-run relationship with the world market. Finally, it is shown that these transitory deviations are short-lived. The rest of the paper is organized as follows: in Section 2 we present a brief discussion of the literature on common stochastic trend in international stock markets; Section 3 presents the econometric methodology; Section 4 discusses the data and the empirical results; and Section 5 outlines the conclusions.