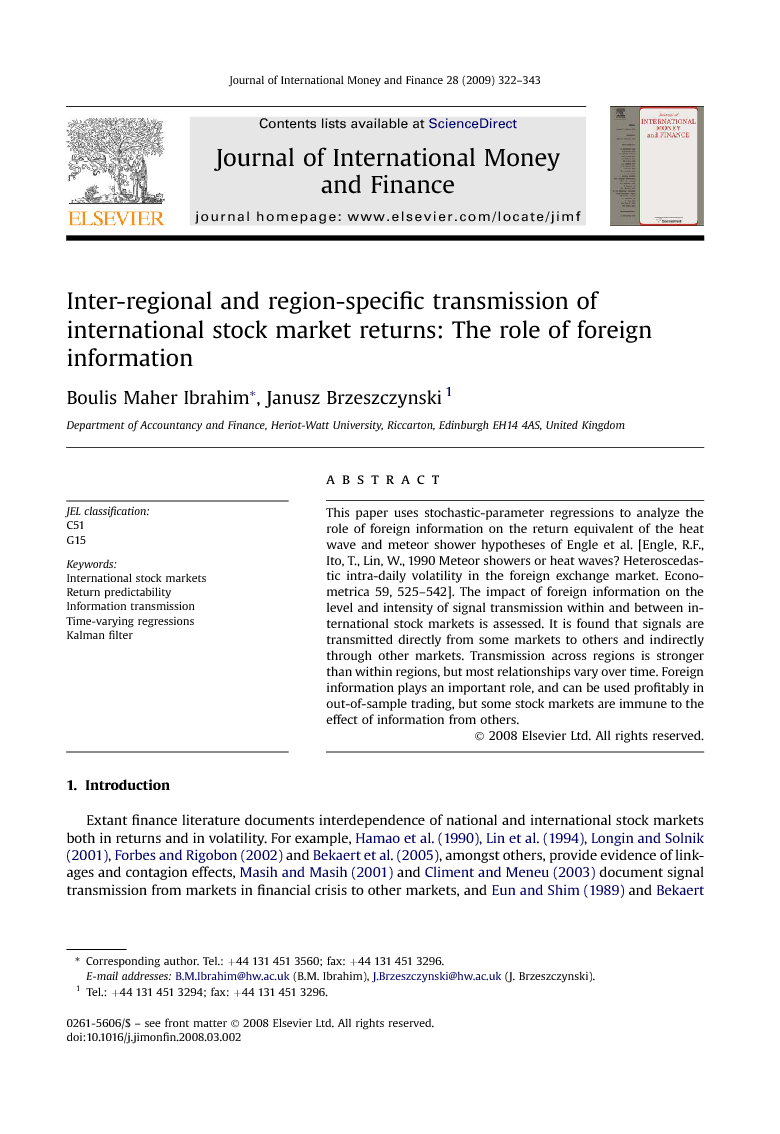 This paper uses stochastic-parameter regressions to analyze the role of foreign information on the return equivalent of the heat wave and meteor shower hypotheses of Engle et al. [Engle, R.F., Ito, T., Lin, W., 1990 Meteor showers or heat waves? Heteroscedastic intra-daily volatility in the foreign exchange market. Econometrica 59, 525–542]. The impact of foreign information on the level and intensity of signal transmission within and between international stock markets is assessed. It is found that signals are transmitted directly from some markets to others and indirectly through other markets. Transmission across regions is stronger than within regions, but most relationships vary over time. Foreign information plays an important role, and can be used profitably in out-of-sample trading, but some stock markets are immune to the effect of information from others.

Extant finance literature documents interdependence of national and international stock markets both in returns and in volatility. For example, Hamao et al., 1990, Lin et al., 1994 and Longin and Solnik, 2001, Forbes and Rigobon (2002) and Bekaert et al. (2005), amongst others, provide evidence of linkages and contagion effects, Masih and Masih (2001) and Climent and Meneu (2003) document signal transmission from markets in financial crisis to other markets, and Eun and Shim (1989) and Bekaert and Harvey, 1997 and Bekaert and Harvey, 2000 show that the largest markets transmit information to smaller or emerging ones. In general, the literature provides evidence of return predictability in the form of time dependence, variable dependence, signal transmission, return linkages and information transfer. The literature also reports a large and increasing amount of evidence on predictability in volatility in the form of time dependence and spill-overs across various asset classes and markets (c.f., Pagan and Schwert, 1990, King and Wadhwani, 1990, Bollerslev et al., 1992 and Adjaoute et al., 1998; to name but a few). In particular, Engle et al. (1990) introduce the ‘heat wave’ and ‘meteor showers’ hypotheses, where volatility persistence from one day to the next resembles the meteorological phenomenon of heat waves and volatility spill-over from one market to another resembles the astronomical phenomenon of meteor showers. These have gained considerable popularity with Ito et al. (1992) investigating further the sources of the meteor shower phenomenon and Baillie and Bollerslev, 1990 and Melvin and Hogan, 1994 and Melvin and Peiers Melvin (2003) analyzing both effects in the foreign exchange market. Although the heat wave and meteor shower effects are commonly associated with the transmission of volatility, these ideas have their natural mirror reflection in returns and can be used in the analysis of return predictability and the investigation of mechanisms by which returns, or returns' direction, are carried over time within markets or transmitted across markets. Since the meteor shower effect is the spill-over of volatility from a market in a particular geographical zone to another in a different geographical zone, then an equivalent for returns would be the transmission of return signals, in the form of the direction of change, from one market to another. If this effect exists, it means that a change of a particular direction in returns of, say, US markets will be followed by a change in returns in the same direction in, say, Asian markets, which open after the US markets close (possibly transmitting all or part of the magnitude of that movement). Similarly, since the heat wave effect is the persistence in volatility from one day to the next within a particular market, the equivalent for returns would be the transmission of the direction of change from one day to the next in the same market. If this effect exists, it implies that a change in a specific direction over a particular day in, say, the UK market will be followed by a change in the same direction the next day (also likely to transmit the magnitude of the movement). Similar to Melvin and Peiers Melvin (2003), who investigate these effects in volatility, we call the former effect the inter-regional transmission of returns and the latter the region-specific (or own-region) transmission of returns. The literature, however, presents little or no evidence on the relative strength, direction and stability of the heat-wave-like and meteor-shower-like region-specific or inter-regional transmission of returns. It also does not tell us much about how these transmission relationships, if they exist, are affected by ‘foreign’ information from markets in other regions that trade in intermediate time. For example, consider markets in the three main geographical regions, USA, Europe and Asia, and the chronological sequence in which they trade. If trading in European markets during a particular day is directly affected by US returns from the previous day, i.e., a meteor-shower-like effect, then does information from Asian-markets' trading today, which is intermediate in time, impact on this direct relationship? Moreover, is this inter-regional relationship stronger than the region-specific relationship between successive daily returns that might exist within Europe alone? What is the direction of these relationships? Are they stable over time? If these relationships vary over time, then how does ‘foreign’ information affect this time variation, if at all? These questions motivate the analysis of this paper. This study uses a state-space framework in which the ‘steady-state’, or the long-term average, of inter-regional or region-specific relationships is defined and estimated. The steady-state ‘level’ and ‘intensity’ of each relationship are distinguished and a conditional time-varying formulation is developed to model the daily deviations of level and intensity from their steady-state values. This framework allows for explicit testing of the impact of foreign information on level and intensity separately. The methodology, therefore, enables us to check whether inter-regional and region-specific transmission relationships exist, to identify their steady states, to investigate daily deviations from steady state, to assess the impact of foreign information and to decompose this impact on level and intensity. Investigating the presence and characteristics of such predictabilities in returns increases our understanding of information transmission mechanisms within and between international markets. This also has obvious implications for investors who adopt strategies based on information transmission signals of the heat-wave or meteor-shower type. This study is partly motivated by the fact that many investors or traders study ‘overnight’ signals from international markets before they start trading for the day in their domestic markets. They may even depend on knowledge of such signals not only for their opening strategies but throughout the trading day, as some of the results of this study show. In formulating reasonable strategies traders rely on the strength, direction and stability of the effect of such signals, otherwise a large element of subjectivity and associated ‘model risk’ may be introduced. Thus, investigating these aspects of return predictability would also be invaluable in the formulation of trading strategies and in assessing and minimizing model risk. The paper is organized as follows. Section 2 presents the adopted methodology, Section 3 presents empirical results and a discussion of implications and Section 4 summarizes and concludes.