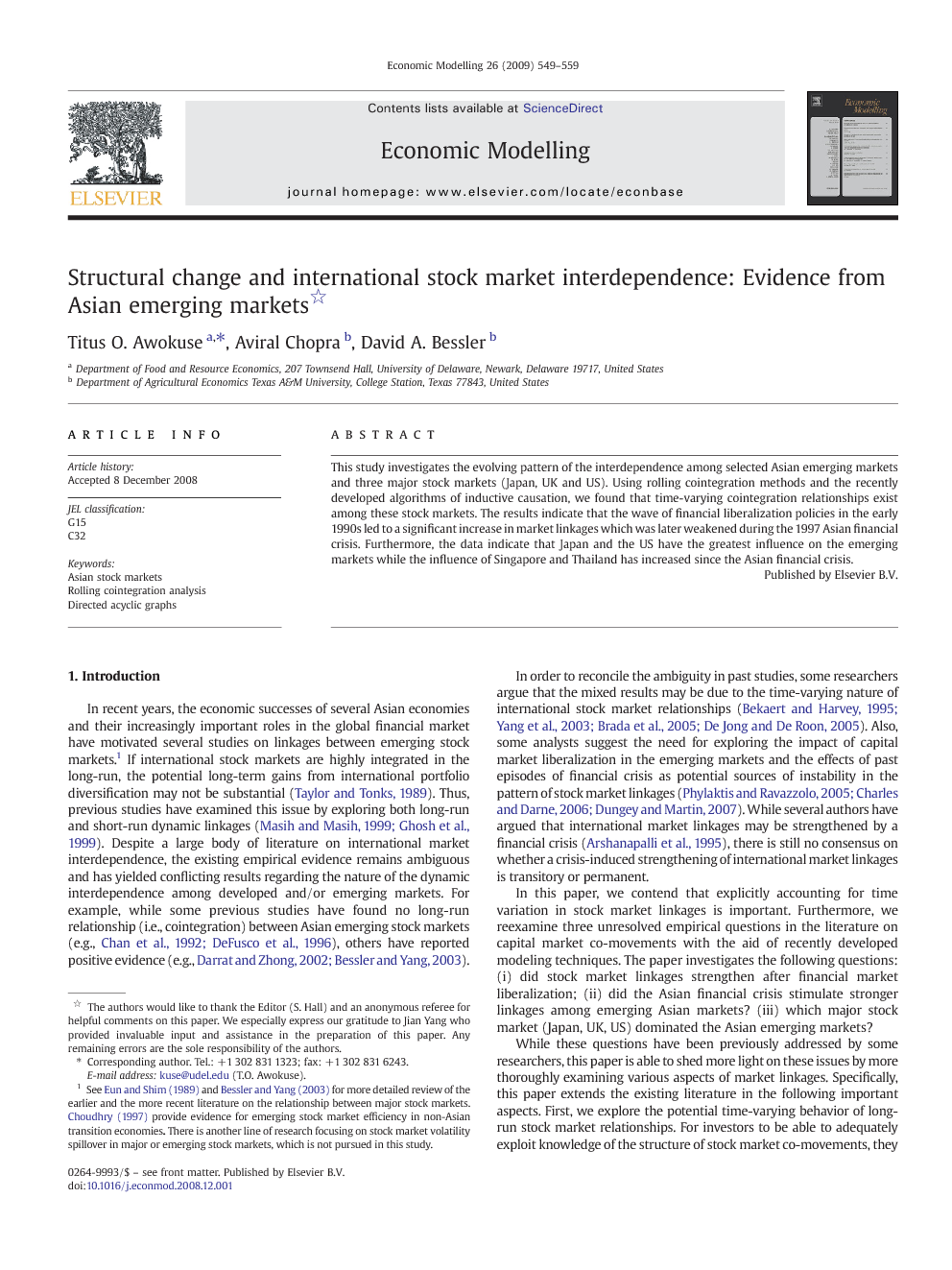 This study investigates the evolving pattern of the interdependence among selected Asian emerging markets and three major stock markets (Japan, UK and US). Using rolling cointegration methods and the recently developed algorithms of inductive causation, we found that time-varying cointegration relationships exist among these stock markets. The results indicate that the wave of financial liberalization policies in the early 1990s led to a significant increase in market linkages which was later weakened during the 1997 Asian financial crisis. Furthermore, the data indicate that Japan and the US have the greatest influence on the emerging markets while the influence of Singapore and Thailand has increased since the Asian financial crisis.

In recent years, the economic successes of several Asian economies and their increasingly important roles in the global financial market have motivated several studies on linkages between emerging stock markets.1 If international stock markets are highly integrated in the long-run, the potential long-term gains from international portfolio diversification may not be substantial (Taylor and Tonks, 1989). Thus, previous studies have examined this issue by exploring both long-run and short-run dynamic linkages (Masih and Masih, 1999 and Ghosh et al., 1999). Despite a large body of literature on international market interdependence, the existing empirical evidence remains ambiguous and has yielded conflicting results regarding the nature of the dynamic interdependence among developed and/or emerging markets. For example, while some previous studies have found no long-run relationship (i.e., cointegration) between Asian emerging stock markets (e.g., Chan et al., 1992 and DeFusco et al., 1996), others have reported positive evidence (e.g., Darrat and Zhong, 2002 and Bessler and Yang, 2003). In order to reconcile the ambiguity in past studies, some researchers argue that the mixed results may be due to the time-varying nature of international stock market relationships (Bekaert and Harvey, 1995, Yang et al., 2003, Brada et al., 2005 and De Jong and De Roon, 2005). Also, some analysts suggest the need for exploring the impact of capital market liberalization in the emerging markets and the effects of past episodes of financial crisis as potential sources of instability in the pattern of stock market linkages (Phylaktis and Ravazzolo, 2005, Charles and Darne, 2006 and Dungey and Martin, 2007). While several authors have argued that international market linkages may be strengthened by a financial crisis (Arshanapalli et al., 1995), there is still no consensus on whether a crisis-induced strengthening of international market linkages is transitory or permanent. In this paper, we contend that explicitly accounting for time variation in stock market linkages is important. Furthermore, we reexamine three unresolved empirical questions in the literature on capital market co-movements with the aid of recently developed modeling techniques. The paper investigates the following questions: (i) did stock market linkages strengthen after financial market liberalization; (ii) did the Asian financial crisis stimulate stronger linkages among emerging Asian markets? (iii) which major stock market (Japan, UK, US) dominated the Asian emerging markets? While these questions have been previously addressed by some researchers, this paper is able to shed more light on these issues by more thoroughly examining various aspects of market linkages. Specifically, this paper extends the existing literature in the following important aspects. First, we explore the potential time-varying behavior of long-run stock market relationships. For investors to be able to adequately exploit knowledge of the structure of stock market co-movements, they would need to possess reliable information on the stability of the observed market linkages (Panton et al., 1976). Indeed, while numerous studies draw on the implication of the (non)existence of cointegration for long-run diversification potentials, the instability of the long-run relationships has not yet received much attention. In this context, the financial liberalization in the Asian emerging markets and the episode of 1997 Asian financial crisis are conceivably potential sources of structural breaks in international stock market integration. Furthermore, the rolling cointegration technique used in this study (Swanson, 1998 and Brada et al., 2005) serves as a formal statistical tool to detect potential multiple structural breaks. The approach extends the recent literature on dating financial market integration (Bekaert and Harvey, 1995 and Bekaert et al., 2002) which argues for the importance of detecting endogenous structural break points in a data-determined manner.2 Second, although the importance of contemporaneous information transmission among stock markets is well recognized, there is generally a lack of in-depth analysis of instantaneous price shock transmission in international financial markets (Eun and Shim, 1989 and Bessler and Yang, 2003). To our knowledge, this paper is the first study to explore the contemporaneous information flow among emerging markets and between emerging markets and major developed markets. Such investigation certainly help us better understand the nature of these stock market relationships and may carry implications for trading (e.g., day trading). Similar to earlier studies, the directed acyclic graph (DAG) technique is employed for the purpose (Spirtes et al., 2000 and Pearl, 2000). Further extending previous studies (e.g., Bessler and Yang, 2003, Demiralp and Hoover, 2003 and Haigh and Bessler, 2004), this study explicitly accounts for the time-varying pattern of instantaneous price shock transmission, and also uses a more sophisticated and powerful DAG algorithm (i.e., GES) instead of the basic and commonly used PC algorithm. Finally, as shown in Swanson and Granger (1997), contemporaneous causal patterns, as identified through DAG analysis of the correlation (covariance) matrix of a vector autoregression (VAR) or error correction model (ECM) residuals, further provides a data-determined solution to the basic problem of orthogonalization. The empirical results confirms that time varying cointegrating relationships exists among the stock markets and that financial market liberalizations and the 1997–98 Asian crisis affected the stability of market linkages. This study also provides strong evidence suggesting that Japan serves as the most dominant market in Asia, and its influence in the region in the longer-run is comparable to that of the US. There is additional evidence in support of previous studies confirming US market leadership role in the long-run. Nevertheless, while the US has great influence on Asian markets in the long-run, its influence in contemporaneous time is insignificant. Rather, the results show that Japan (and Singapore) provides leadership to the other Asian markets in contemporaneous time. The remainder of the paper is organized as follows. Section 2 discusses the empirical methodology, Section 3 describes the data, Section 4 presents the empirical results, and Section 5 contains concluding remarks.