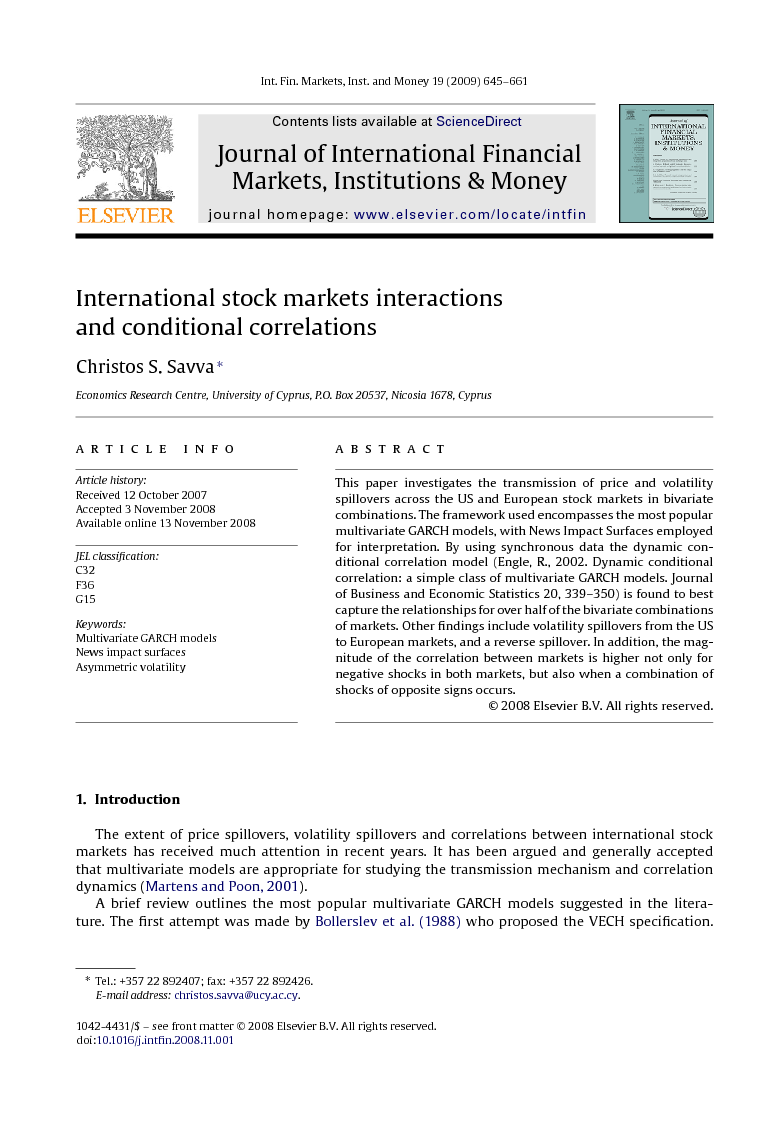 This paper investigates the transmission of price and volatility spillovers across the US and European stock markets in bivariate combinations. The framework used encompasses the most popular multivariate GARCH models, with News Impact Surfaces employed for interpretation. By using synchronous data the dynamic conditional correlation model (Engle, R., 2002. Dynamic conditional correlation: a simple class of multivariate GARCH models. Journal of Business and Economic Statistics 20, 339–350) is found to best capture the relationships for over half of the bivariate combinations of markets. Other findings include volatility spillovers from the US to European markets, and a reverse spillover. In addition, the magnitude of the correlation between markets is higher not only for negative shocks in both markets, but also when a combination of shocks of opposite signs occurs.

The extent of price spillovers, volatility spillovers and correlations between international stock markets has received much attention in recent years. It has been argued and generally accepted that multivariate models are appropriate for studying the transmission mechanism and correlation dynamics (Martens and Poon, 2001). A brief review outlines the most popular multivariate GARCH models suggested in the literature. The first attempt was made by Bollerslev et al. (1988) who proposed the VECH specification. However, the major drawbacks of the VECH model are the difficulty to guaranty a positive definite variance covariance matrix and the rapid increase of the parameters to be estimated for any additional dependent variable. This model was followed by the Constant Conditional Correlation (CCC) model, proposed by Bollerslev (1990) with the only critique being the assumption of constant correlations which is often unrealistic in empirical applications. In 1995, Engle and Kroner suggested the BEKK model which overcomes the problem of positive definite variance–covariance but not the problem of dimensionality.1 Alexander proposed the Factor-GARCH (with Chibumbu, in 1997) and Orthogonal-GARCH (2001), respectively. Recently, an extension of the CCC model, the dynamic conditional correlation (DCC) model was proposed by Engle (2002). Under the DCC specification, the correlation is time varying and is able to capture the changes over time. For further details about various multivariate models, refer to Bauwens et al. (2006), and Palandri (2005). Although each of the above models has its own characteristics with some advantages and disadvantages, it will be very beneficial to have a model that encompasses at least the major multivariate models. In a seminal paper, Kroner and Ng (1998) attempt to do so. Their model, the Generalized Asymmetric Dynamic Correlation (GADC) encompasses a number of major multivariate models. They apply this generalized model to study the dynamic relation between large and small firm returns and they show that it behaves better than the specific multivariate GARCH models. However, the GADC model does not encompass one of the most recent and popular models, the DCC model. By following a suggestion of Bauwens et al. (2006), we extent the GADC model to include the DCC specification. Under this Extended Generalized Asymmetric Dynamic Correlation framework (hereafter EGADC) we examine the price and volatility spillovers as well as the correlations between five important European stock markets (the UK, Germany, France, Italy and Spain) along with the US.2 Many other studies have tried to examine similar relationships (for instance see Cappiello et al., 2006, Baele, 2005, Bartram et al., 2007, Billio and Pelizzon, 2003, Kim et al., 2006, Hardouvelis et al., 2006 and Savva et al., forthcoming among others). Although concerned with similar issues, each study employs a different model and as Martens and Poon (2001) point out, conditional correlations may have different signs depending on the model and data type used. Therefore, on the one hand this study examines similar relationships to the previous studies (i.e. whether evidence for price and/or volatility spillovers from one market to another exists, the direction of influence, and the changes in conditional correlations). On the other hand it differs from others by using a general framework (which encompasses the most popular multivariate GARCH models), thereby providing evidence on which model fits the data better. Furthermore, news impact surfaces analysis is employed for the investigation on the pattern of shock transmissions. Our findings suggest that for around half of the bivariate combinations of markets in this study; the dynamic conditional correlation model adequately captures the relationships between stock markets, whereas a more general asymmetric model is required for the remaining cases. Furthermore, there are price and volatility spillover effects not only from US to European stock markets but also from Europe to US, supporting previous evidence of Martens and Poon (2001). Finally, we observe an increase in correlation in all markets before the launch of the Euro, which became less volatile after the introduction of the common currency, especially for the Euro Area countries. The rest of the paper is organized as follows: Section 2 discusses the methodology of the study; Section 3 analyses the data and the empirical findings; Section 4 presents the specification tests and Section 5 summarizes the study and concludes.