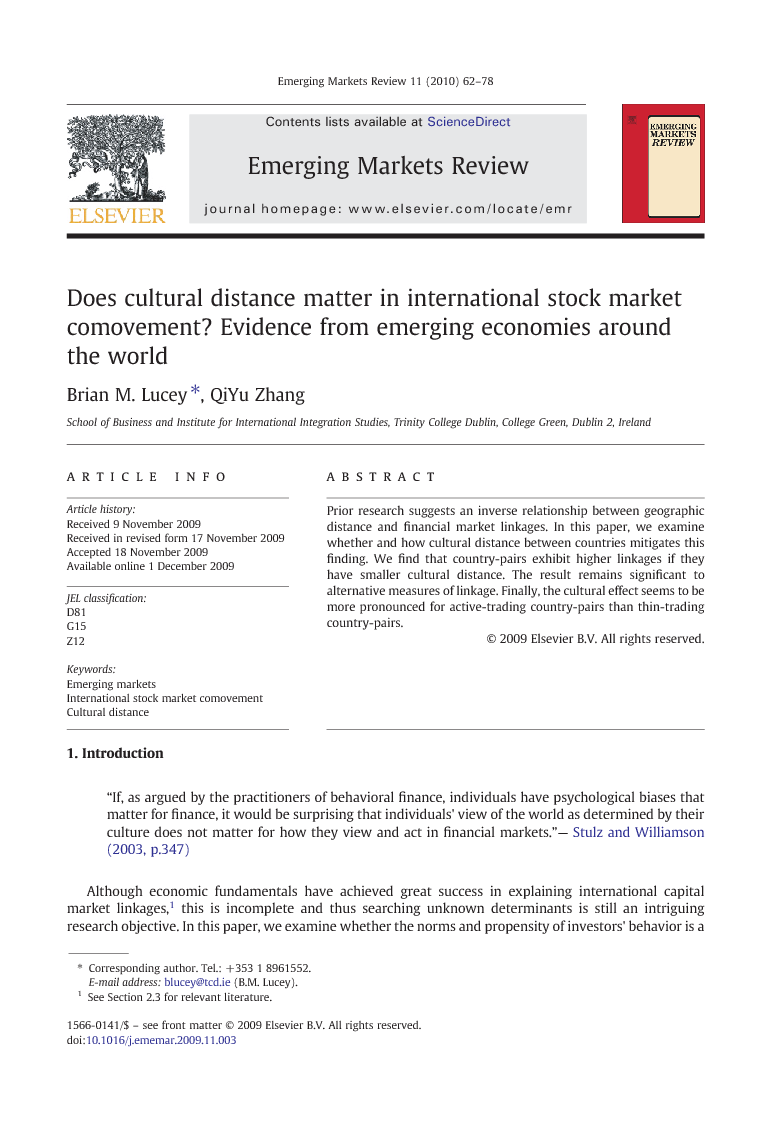 Prior research suggests an inverse relationship between geographic distance and financial market linkages. In this paper, we examine whether and how cultural distance between countries mitigates this finding. We find that country-pairs exhibit higher linkages if they have smaller cultural distance. The result remains significant to alternative measures of linkage. Finally, the cultural effect seems to be more pronounced for active-trading country-pairs than thin-trading country-pairs.

“If, as argued by the practitioners of behavioral finance, individuals have psychological biases that matter for finance, it would be surprising that individuals' view of the world as determined by their culture does not matter for how they view and act in financial markets.” — Stulz and Williamson (2003, p.347) Although economic fundamentals have achieved great success in explaining international capital market linkages,1 this is incomplete and thus searching unknown determinants is still an intriguing research objective. In this paper, we examine whether the norms and propensity of investors' behavior is a missing piece of a puzzle. Two arguments inform this paper, one the cause of frictions in international integration and the other on the extent of natural barriers. With respect to the first argument, one could expect that international financial integration will move to a higher level after transformations such as financial liberalization. However, it may not reach to a “perfect” or full-scale degree. This point has been demonstrated by early works from both quantity- and price-based perspectives. For example, French & Poterba, 1991, Cooper & Kaplanis, 1994 and Tesar & Werner, 1995 document the equity home bias puzzle which describes the fact that individual and institutional investors only hold modest amounts of foreign equity assets even when there are no regulation restrictions on cross-border asset holding; Bekaert and Harvey (1995) show that global integration is a time-varying process; Harvey (1995) finds that standard global asset pricing models fail to explain the cross-sectional returns in emerging economies; and Kang and Stulz (1997) study the ownership in Japanese stocks by foreign investors and confirm the existence of equity home bias. This evidence brings us to the second argument, which says that when artificial barriers are removed, natural barriers remain to hinder market connections. In the spirit of gravity models, some recent literature considers geographic and cultural variables as natural determining factors. Flavin et al. (2002) test the effect of several geographical variables such as great circle distance, common land border, common language, colonial links and overlapping opening hours on cross-country stock market price correlation. The authors find that sharing a common border and the number of overlapping opening hours exert significant positive impact on correlation between markets. Portes and Rey (2005) find that the geographic information is the main determinant of the pattern of cross-border equity flows. Aggarwal et al. (2009) take cultural distance as a type of transaction cost. They find that smaller cultural distance between financial trading partners will lead to greater cross-border foreign portfolio investment (FPI) holdings of debt and equity, and these effects are greater for cross-border equity than debt holdings. These works deliver a basic idea that geographic and cultural distance acts as a proxy for transaction cost, information asymmetry and unfamiliarity effect. These effects will impact on cross-border capital flows and price comovement. Moreover, the existence of agency problems tends to shy away foreign investors from overcoming these problems such as hiring local portfolio managers. As shown above, researchers have started to investigate the role of cultural distance. In this paper, our main question is: does cultural distance affect the comovement of stock market returns? Intuitively, people resident in different cultural settings are likely to behave in different ways when they make decisions. Hofstede (1994) defines culture as “the collective programming of the mind which distinguishes the members of one group or category of people from those of another.” Adler (1997) argues that culture influences people's values, which in turn affects their attitudes, and then behavior. The effect would also apply to the situation when people invest in financial assets. The price of financial assets (e.g., share price) can be regarded as a comprehensive reflection of decisions made by investors. Hence, if investors from different countries share much common in behavioral habits and attitudes towards investing, it is likely that this similarity will result in higher levels of stock market comovement. There is still little effort to empirically examine this possibility in the literature. We test whether two cultural distance variables are helpful to explain the variations in stock market correlation. Specifically, we use religious commonality as one proxy for cultural distance since beliefs might affect people's behavior, attitudes and thoughts. In addition, we use a variant of the Hofstede measures adjusted by the process suggested by Kogut and Singh (KS) (1988). This measure is calculated based on different cultural dimensions which might shape people's behavioral patterns in a country. Our regression results indicate that stock market correlation is positively related to common religion, and negatively related to KS measure at 1% significance level. This suggests that the smaller the cultural distance between two countries, the higher the levels of bilateral stock market comovement. Consider two country-pairs — one has the largest cultural distance, and the other has the smallest cultural distance (both defined by KS measure); a disparity of 0.076 in correlation is observed between the two pairs. This roughly equals an increase of 30% in correlation for the lower correlated pair. The cultural effect is both statistically and economically significant. We conduct two sets of additional tests to check the robustness of the main results. First, conditional correlation is used instead of unconditional correlation to measure comovement. Second, we split the sample into thin-trading group and active-trading group, and then examine the cultural effects on these two groups separately. The results of both robustness checks consolidate the findings in the main results. The rest of the paper is organized as follows. Section 2 discusses the cultural effects on economics and finance, motivates our proxies for cultural distance, and reviews the economic determining factors of market linkage. Section 3 describes the data and variables. Section 4 presents the empirical setting and regression results. Conclusion and implications are given in Section 5.