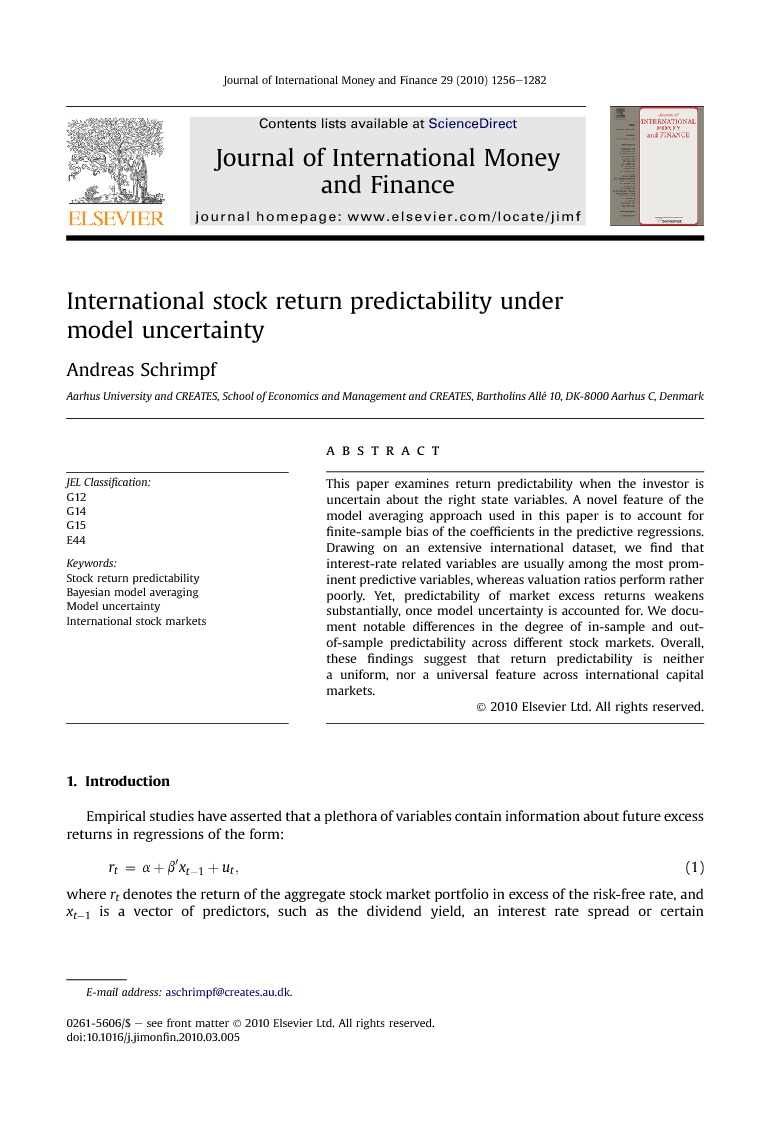 This paper examines return predictability when the investor is uncertain about the right state variables. A novel feature of the model averaging approach used in this paper is to account for finite-sample bias of the coefficients in the predictive regressions. Drawing on an extensive international dataset, we find that interest-rate related variables are usually among the most prominent predictive variables, whereas valuation ratios perform rather poorly. Yet, predictability of market excess returns weakens substantially, once model uncertainty is accounted for. We document notable differences in the degree of in-sample and out-of-sample predictability across different stock markets. Overall, these findings suggest that return predictability is neither a uniform, nor a universal feature across international capital markets.

Empirical studies have asserted that a plethora of variables contain information about future excess returns in regressions of the form: equation(1) rt=α+β′xt−1+ut,rt=α+β′xt−1+ut, Turn MathJax on where rt denotes the return of the aggregate stock market portfolio in excess of the risk-free rate, and xt−1 is a vector of predictors, such as the dividend yield, an interest rate spread or certain macroeconomic variables. Statistically significant β coefficients in Eq. (1) are taken as evidence for predictability and are typically interpreted as evidence that risk-premia are time-varying. 1 The existence of return predictability has significant economic consequences (for both individual investors and academia). From an investor’s perspective, economic theory suggests that in the presence of return predictability investors should make asset allocation decisions conditional upon predictions of future returns whereas investors who fail to do so may suffer substantial welfare losses (See e.g. Campbell and Viceira, 2002). From an academic perspective, the question of whether returns are predictable is of substantial importance for our understanding of the dynamic (macroeconomic) risks for which investors demand a compensation in equilibrium. A typical (implicit) assumption in the return predictability literature is that an investor chooses a-priori the particular variables (or combination of variables) that she wants to use to predict returns. This is a restrictive assumption, as there is no guarantee that the combination of variables chosen is the right one. Given the large number of variables proposed in the literature, an investor is thus confronted with a high degree of uncertainty on what the “right” variables are. Moreover, the fact that so many variables have been found to be valuable predictors of returns naturally raises the concern that the apparent predictability may well arise from data-snooping, rather than from genuine variation of economic risk-premia.2 Hence, it seems clearly warranted to take “model uncertainty” into account when assessing the statistical evidence on return predictability and its potential usefulness from an investor’s point of view. In this paper we investigate the predictability of aggregate stock returns in major international stock markets (United States, France, Germany, Japan, United Kingdom). It is fair to say that the profession’s view on return predictability has been shaped for the most part by empirical studies on the U.S. stock market. However, several authors have argued that the strong performance of the U.S. market has been quite unique in history, reflecting the rise of the U.S. to the world’s most important economic power (Dimson et al., 2008). A sole focus on the U.S. in empirical research may thus have similar effects to an ex-post selection bias, a point made forcefully by Dimson et al. (2008). Moreover, the different capital markets considered in this paper differ in several institutional regards, e.g. in terms of stock market participation on behalf of individual investors or the role of capital markets as a vehicle for retirement provision, which implies that return predictability can have quite different economic consequences across markets. The major goal of this paper is therefore to explore the robustness of several common predictive variables for international stock returns and to shed light on cross-country differences in return predictability patterns. In order to account for model uncertainty, we follow the seminal work by Cremers (2002) and Avramov (2002) and use a Bayesian model averaging approach. Unlike the classical framework, the Bayesian approach does not assume the existence of a “true” model. By contrast, a-posteriori model probabilities can be derived for the candidate models, which are then used to weight the coefficients accordingly in a composite model. In this manner, model uncertainty can be accounted for in a coherent way. A new methodological feature of our approach is to account for finite-sample bias of the coefficients in the predictive regressions in a “frequentist” model averaging framework. While in-sample predictability is a debated topic, the question whether stock returns may be predictable out-of-sample (OOS) has been even more controversial. Recently, several authors – most notably Goyal and Welch (2008) – argue against the existence of stock return predictability, based on the lacking evidence for OOS predictability. The paper of Goyal and Welch (2008) merely considers forecasts generated by individual models but neglects the issue of forecast combination. In environments characterized by model uncertainty and instability, however, model combination may serve as a means to obtain more reliable and robust predictions (e.g. Avramov, 2002 and Timmermann, 2006). Thus, a further aim of the paper is to take a closer look at the OOS performance of model averaging methods, in particular the time-variation of forecast performance. Our main results can be summarized as follows. Only very few variables, if any, emerge as robust predictors of returns in international stock markets. We find that interest-rate related variables are usually among the most robust predictive variables, which corroborates recent results by Rapach et al. (2005) and Ang and Bekaert (2007). Valuation ratios such as the dividend yield, however, generally perform rather poorly and appear as important predictors only for specific stock markets (U.S. and U.K.). Several notable differences in the return predictability patterns are found across countries. Most notably, the degree of predictability evidence (in-sample and out-of-sample), as well as the relevance of certain predictors varies substantially across countries. Overall, our results show that return predictability cannot be taken as a uniform and universal feature of international stock markets. The remainder of the text is structured as follows. Section 2 explains how this paper is related to the extant literature and provides further motivation on the empirical design of the study. Section 3 presents the econometric framework of predictive regressions and shows how model uncertainty can be accounted for in a model averaging framework. Section 4 briefly discusses our dataset and provides information about the theoretical motivation of the different state variables used as predictors. Empirical results of in-sample predictive regressions under model uncertainty are presented in Section 5. Section 6 investigates out-of-sample forecasts of the equity premium by forecast combination methods. A special focus is put on the documentation of the time-variation and drivers of OOS performance across countries. Section 7 concludes.

In this paper we demonstrate that a typical investor trying to predict international stock returns faces a large amount of model uncertainty. We use a Bayesian averaging of classical estimates (BACE) approach to account for the tremendous uncertainty in determining what the important predictive variables are. This approach is combined with a finite-sample bias-correction which accounts for the persistence of the state variables usually employed. Using a comprehensive dataset for international stock markets allows us to gain several fresh insights into the empirical evidence on return predictability across countries. We find substantial cross-country differences in the patterns of return predictability. Evidence for in-sample and out-of-sample predictability is generally strongest for the U.S. and the French stock markets. By contrast, evidence for predictability in Germany, Japan and the U.K. is very weak, which puts doubts on the usefulness of return predictability for asset allocation purposes in these three stock markets from an investor’s point of view. Our results show that (at best) two variables appear to be quite robust (in-sample) predictors across countries: the relative bond rate and the output gap. Another major finding of the paper is that notable cross-country differences in the role of valuation ratios as predictors of returns can be observed. When it comes to OOS equity premium prediction in international stock markets, we detect only a very limited amount of overall OOS predictability. Consistent with Avramov (2002), we find that model averaging methods tend to produce better OOS forecasts than individual models based on selection criteria. More importantly, however, our analysis shows that OOS predictability in international stock markets is only concentrated in certain (short-lived) time periods, extending the prior evidence by Goyal and Welch (2008) and Timmermann (2008). We show that these episodes often differ substantially across countries. Thus, all in all, our results suggest that return predictability is neither a universal, nor a uniform feature of international stock markets.