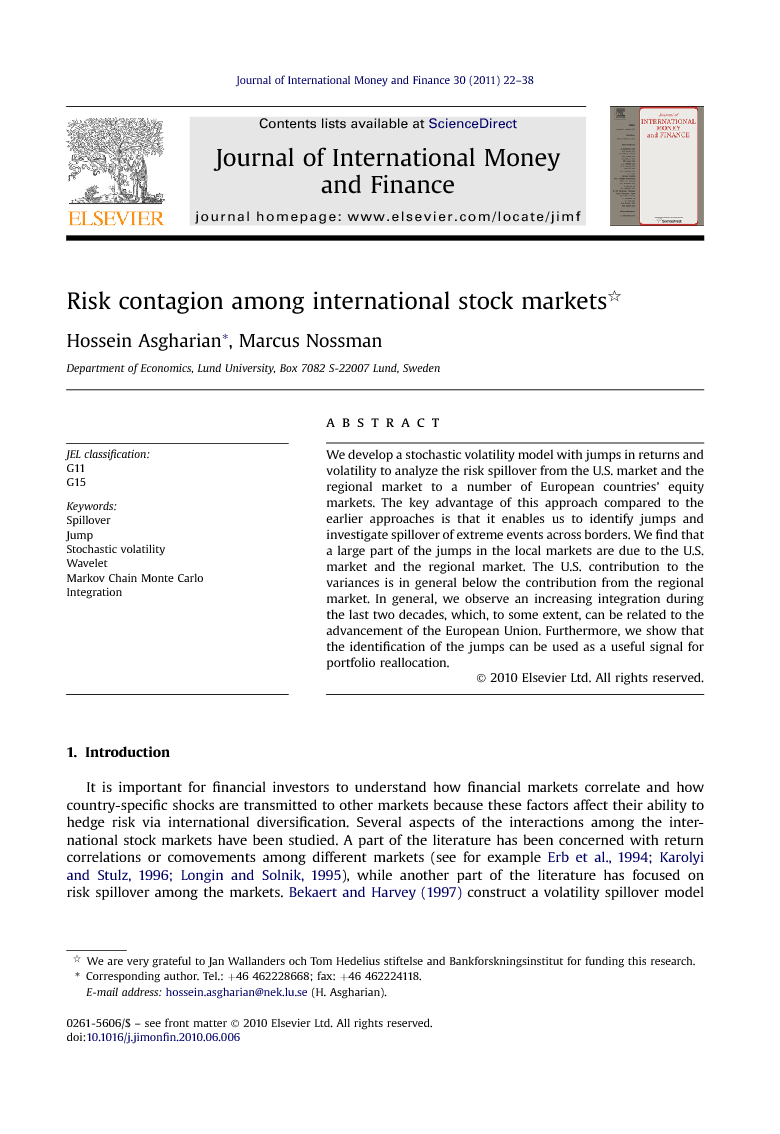 We develop a stochastic volatility model with jumps in returns and volatility to analyze the risk spillover from the U.S. market and the regional market to a number of European countries’ equity markets. The key advantage of this approach compared to the earlier approaches is that it enables us to identify jumps and investigate spillover of extreme events across borders. We find that a large part of the jumps in the local markets are due to the U.S. market and the regional market. The U.S. contribution to the variances is in general below the contribution from the regional market. In general, we observe an increasing integration during the last two decades, which, to some extent, can be related to the advancement of the European Union. Furthermore, we show that the identification of the jumps can be used as a useful signal for portfolio reallocation.

It is important for financial investors to understand how financial markets correlate and how country-specific shocks are transmitted to other markets because these factors affect their ability to hedge risk via international diversification. Several aspects of the interactions among the international stock markets have been studied. A part of the literature has been concerned with return correlations or comovements among different markets (see for example Erb et al., 1994, Karolyi and Stulz, 1996 and Longin and Solnik, 1995), while another part of the literature has focused on risk spillover among the markets. Bekaert and Harvey (1997) construct a volatility spillover model to analyze the impact of the world equity market on the emerging equity markets. Ng (2000) applies the same approach to analyze the volatility spillovers from Japan and the USA to six Pacific-Basin equity markets. Related to this approach, Bekaert et al. (2005) analyze equity market integration in three different regions, Europe, South-East Asia and Latin America, and measure proportion of volatility driven by global, regional and local factors. The paper also provides new insights on contagion, defined as correlation over what would be expected from economic fundamentals. Kim et al. (2005) investigate stock market integration among the European countries before and after the establishment of the European currency union. Baele (2005) studies stock market integration between the U.S. market and European countries using a regime-switching GARCH model. In recent years, there has been a growing interest in modeling discontinuity in equity returns, so called return jumps, caused by large informational shocks or extreme events. The importance of modeling jumps in optimal portfolio selection, in a domestic or an international framework, has been shown by studies such as Das and Uppal, 2004 and Liu et al., 2003, and Wu (2003). Asgharian and Bengtsson (2006) and Bengtsson (2006) apply a stochastic volatility model with jumps and analyze the spillover of jumps across borders. They show that the dependencies among the jump processes in different markets are quite different from the dependencies among normal returns that are not jumps. This implies that international investors who use correlations among markets in their portfolio decisions may have no protection against event risk. Our purpose is to analyze how the local equity markets of the European countries are affected by their regional equity market (other European equity markets) and the U.S. equity market. Our approach simultaneously investigates all three aspects of the interactions among markets, the correlation, the variance spillover and the jump spillover. We separate three sources of shocks to each European equity market: shocks from the U.S. market, shocks from the regional market and idiosyncratic or local shocks. Our approach is related to the model proposed by Bekaert and Harvey, 1995 and Bekaert and Harvey, 1997. However, we extend the model in several ways. We use a more general volatility model, i.e., the stochastic volatility model, instead of a GARCH model. More importantly, our model allows for the existence of jumps in returns and volatility. This enables us to capture extreme values in returns and achieve a better estimation of the parameters compared to models assuming a normal distribution for returns. In addition, this approach makes it possible to identify jumps and directly model the contagion of extreme events across borders. Furthermore, allowing for jumps in volatility and considering the correlations between return and volatility make it possible to fully capture asymmetry in the volatility (the leverage effect). Bekaert et al. (2005) note that a model that fails to capture volatility asymmetry may misjudge the correlation between stock markets during crises. We allow for time-varying coefficients by relating the spillover parameters to countries’ degree of integration. It is rational to think about integration as a state variable that fluctuates smoothly over time. However, most of the variables applied in previous literature to measure the degree of integration are exposed to such problems as seasonality, short-term variability and estimation error. We use a wavelet approach to filter out all the short-term variations (frequencies up to one year) in the variables measuring country integration. Our key contribution is to develop a model for analyzing spillover of both normal and extreme shocks across borders. The model’s ability to identify price jumps enables us to analyze portfolio allocation in distress periods following extreme events. In addition, our sample length allows for analyzing effects of the development of the European Union (EU) and the introduction of the Euro on interdependencies among the European equity markets. Our results show that the U.S. contributions to the country variances lie in general below the contributions from the regional (European) market. The spillover in jump days and periods following jumps is not significantly different from spillover in other periods. We find a significant increase in the spillover of the normal shocks from the regional market after 1992, which may be related to the development of the EU. However, our results cannot give a clear view over the impact of the introduction of Euro on the market integration. Finally, we show a large benefit, in term of risk reduction, for the U.S. investors from international diversification in the periods of large market volatility and, more importantly, in the periods following jump events. Therefore, the identification of the jump events can be used as an important signal for portfolio reallocation. The rest of the paper is organized as follows. Section 2 presents the empirical models. Data and econometric methods are described in Section 3. Section 4 contains the empirical results and the analyses. Section 5 concludes the study.

We investigate the risk spillover to the equity markets of the European countries during the period 1982–2007. We consider three sources of shocks to each local equity market, shocks from the U.S. market, shocks from the regional market and idiosyncratic or local shocks. We extend Bekaert and Harvey’s (1997) model by applying the stochastic volatility model instead of GARCH and allowing for jumps in returns and volatility. We find that Austria, Denmark and Norway have consistently larger idiosyncratic variances, which shows a low degree of integration or higher volatile markets than the U.S. market and the other European countries. U.S. contributions to the country variances lie in general below the contribution from the European markets. Our analysis of the jump spillover shows that the impact of outside jumps is significant on all the local markets. However, the percentage spillover effect of the extreme shocks is in general not significantly different from the percentage spillover of the normal shocks. We cannot find a significant difference in market dependencies during the normal periods and periods after jumps. However, we show that a large part of the country jumps can be explained by the U.S. and European markets’ return shocks.We also perform a test to compare the pre- and the post-EU periods. Although for most countries we observe an increase in the impact from the regional market in pace with the progress of the European Union, a parallel increase in the U.S. spillover in the last decade makes it difficult to determine the impact of the introduction of the Euro on the integration among countries. We conclude the analysis by looking at implications of our model for risk management. We find a relatively large positive comovement between variance and correlation, which indicates that a large U.S. market volatility generally contaminates other markets. Despite this fact, we show a large benefit, in term of risk reduction, for the U.S. investors from international diversification in the periods of large market volatility. More importantly, we show that the volatility of the U.S. market increases greatly in the periods following jumps. This implies considerable changes in the minimum variance portfolio weights. Consequently, the identification of jump events can be used as an important signal for portfolio reallocation.