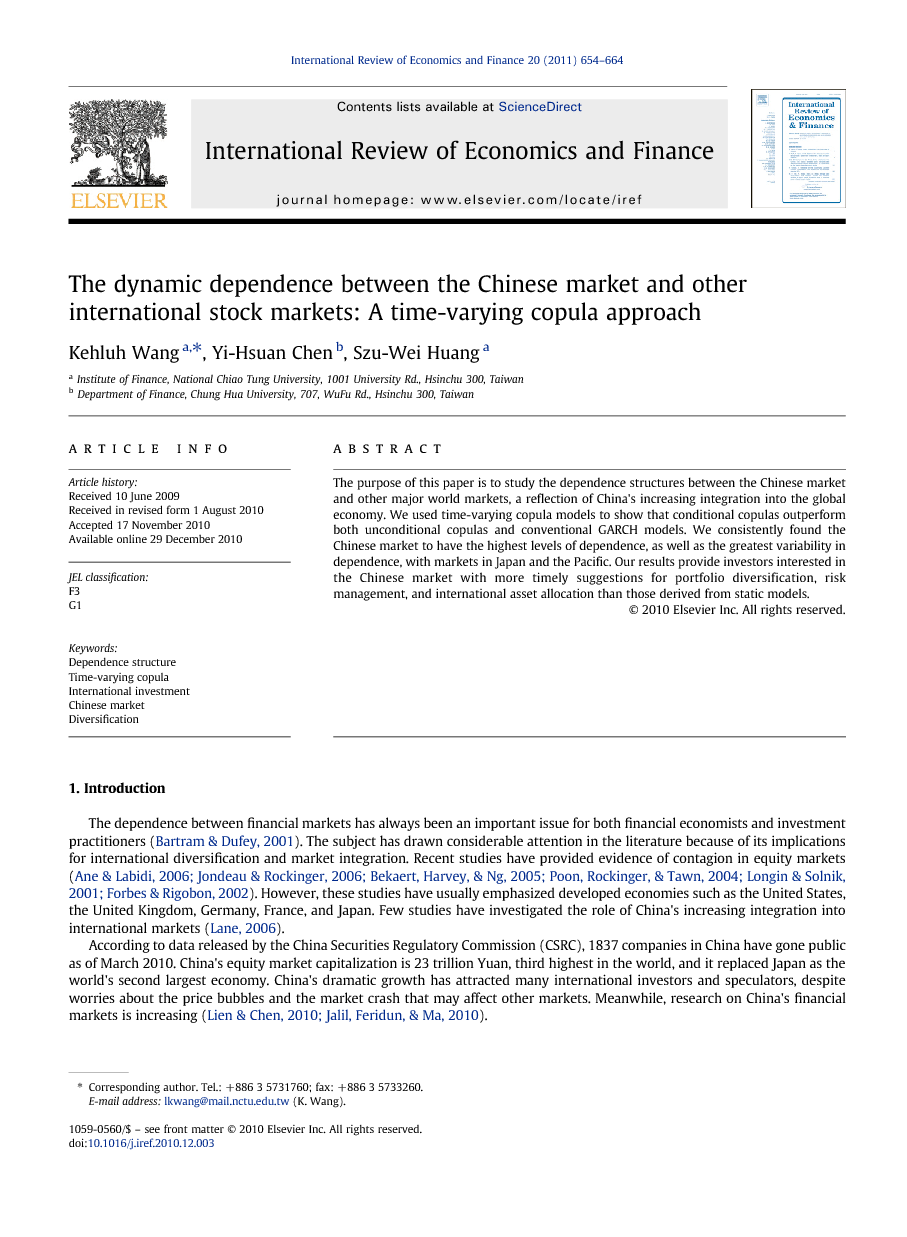 The purpose of this paper is to study the dependence structures between the Chinese market and other major world markets, a reflection of China's increasing integration into the global economy. We used time-varying copula models to show that conditional copulas outperform both unconditional copulas and conventional GARCH models. We consistently found the Chinese market to have the highest levels of dependence, as well as the greatest variability in dependence, with markets in Japan and the Pacific. Our results provide investors interested in the Chinese market with more timely suggestions for portfolio diversification, risk management, and international asset allocation than those derived from static models.

The dependence between financial markets has always been an important issue for both financial economists and investment practitioners (Bartram & Dufey, 2001). The subject has drawn considerable attention in the literature because of its implications for international diversification and market integration. Recent studies have provided evidence of contagion in equity markets (Ane and Labidi, 2006, Jondeau and Rockinger, 2006, Bekaert et al., 2005, Poon et al., 2004, Longin and Solnik, 2001 and Forbes and Rigobon, 2002). However, these studies have usually emphasized developed economies such as the United States, the United Kingdom, Germany, France, and Japan. Few studies have investigated the role of China's increasing integration into international markets (Lane, 2006). According to data released by the China Securities Regulatory Commission (CSRC), 1837 companies in China have gone public as of March 2010. China's equity market capitalization is 23 trillion Yuan, third highest in the world, and it replaced Japan as the world's second largest economy. China's dramatic growth has attracted many international investors and speculators, despite worries about the price bubbles and the market crash that may affect other markets. Meanwhile, research on China's financial markets is increasing (Lien and Chen, 2010 and Jalil et al., 2010). The recent experience of stock markets around the world suggests that a catastrophic event in China could easily trigger international reactions.1Xu and Fung (2002) found significant mutual feedback of information about China-backed stocks that were dual-listed in Hong Kong and New York. Li (2007) found a weak integration of the Chinese stock exchanges with the regional developed markets. Chan, Fung, and Thapa (2007) illustrated how China's financial market has emulated and become integrated with developed markets over time. Using an asymmetric dynamic conditional correlation GARCH model (AG-DCC-GARCH), Hyde, Bredin, and Nguyen (2007) found significant time-varying conditional correlations among equity markets in the Asian-Pacific countries, Europe, and the US. Sun, Tong, and Yan (2009) pointed out that China has been able to increase its integration with other countries primarily because it has opened its markets to foreign investments and cross-border listings. In a further exploration of time-varying dependence structures in Chinese and US financial markets, Hu (2010) found their association to be quite volatile over time. On the other hand, Lai and Tseng (2010) observed no significant dependences among China and the G7 countries, regardless of whether market conditions were normal or abnormal. They suggested that the Chinese stock market is a good candidate for hedging when global markets are normal and a safe haven when they are turbulent. On the other hand, Guo and Huang (2010) found that speculative capital inflow (hot money) affected China's real estate and stock markets. The purpose of the present study was to determine whether China's financial market becomes more related with other world markets by applying dynamic copula models to the time-varying dependence structures. Because China's economy has attracted a huge number of foreign speculators, a crash of its stock market would likely prompt sudden withdrawals, which could become contagious. The dynamic relationships among these markets have important implications for portfolio diversification, risk management, and international asset allocation. For example, the greater the dependence between China and another country, the greater the risk to the financial assets of both countries. Thus, fund managers should pay more attention to diversifying the investment of their assets in both countries. Particular attention should be paid to tail dependences which would indicate the effects of diversification during both downturns and upturns. To assess these changing dependence structures over time, we estimated time-varying copula models to compare selected stock markets indices. To account for non-linear and time-dependent relationships, the parameters of the copula functions were assumed to follow dynamic processes conditional on the available information. This approach differs markedly from conventional linear-based correlation methods such as the CCC-GARCH or DCC-GARCH models, which are somewhat restrictive due to their requirements of normality for the joint distribution and of linear relationships among variables. Our study represents two advances over previous literature. First, few studies have focused on the co-movements of the Chinese market with those of other world markets, despite China's considerable growth and increasing integration with these countries. Some of these studies have been confined to China's regional role (Cheng and Glascock, 2005, Cheng and Glascock, 2006, Baur, 2007 and Chang et al., 2000). Because China's production and trade have attained significant global influence (Chan, Lien, & Weng, 2008), we hypothesize that the connections between the Chinese market and other world markets will be further increased. The second contribution of the present study is to demonstrate how a conditional copula model can be applied to increase portfolio diversification and improve active asset allocation for investors interested in Chinese markets. A copula-based measure can specify the dependence structures and account for non-linearity without the constraint of normality. In particular, an extended time-varying copula model with a conditional joint distribution can be used to calculate conditional means, variances, and correlations as well as the temporal paths of other dependence measures, such as tail dependence and rank correlations (Patton, 2006a). Our copula models allow us to investigate both the conditional dependence structures and the conditional tail dependences between the Chinese and other major stock markets. This forward-looking assessment can provide useful information for those who seek to actively diversify their international portfolios and manage their worldwide assets. Specifically, data were collected from the daily stock indices of Morgan Stanley Capital International (MSCI) China, MSCI Japan, MSCI United States, MSCI Europe, MSCI Pacific, MSCI World, and MSCI AcWorld from 2000 to 2009. We consistently found that the Chinese market experienced greater, and also more variable, dependence with markets in Japan and the Pacific. This result suggests that the probability of a joint crash will be high for markets in these areas once the bubble bursts in China. It also demonstrates the dramatic impact of China's market on its neighbors. Thus, portfolio managers should pay more attention to these co-movements. The remainder of this paper is structured as follows: Section 2 explains the time-varying copula models. Data and summary statistics are reported in Section 3. Empirical results are analyzed and discussed in Section 4, and our conclusions are provided in Section 5.

Knowledge of the multivariate conditional distribution, especially if it has fat tails and asymmetric dependence, is essential to many important financial applications such as portfolio selection, asset pricing, risk management, and forecasting (Chen & Fan, 2006). However, studies of international dependences have focused mainly on developed markets. Relatively few have investigated the role of China, despite the noticeable growth in its capital markets and its increasing integration into the global economy. China's economic prominence has led us to emphasize the dynamic dependence between the Chinese stock market and other markets of the world using time-varying copula models. Our approach can help quantify downside risk, improve VaR calculation, and allocate assets dynamically. We found significant variability in the dependences among markets over time. Regardless of which copula function was used, we consistently found that the Chinese market had not only the highest levels of dependence, but also the greatest variability of dependence, with the Japanese and Pacific markets. This high dependence can be attributed to the close geographical proximities and trading relationships between China and the Pacific nations. This finding implies that the probability of joint market crashes in these areas is high if the bubble bursts in China, and portfolio managers should become more alert to and take account of this comovement. Furthermore, the greater dynamic dependences during bear markets imply that opportunities for portfolio diversification are reduced at such times. Finally, the results from the goodness-of-fit test indicate that the conditional copulas outperform the unconditional models as well as the conventional GARCH models.