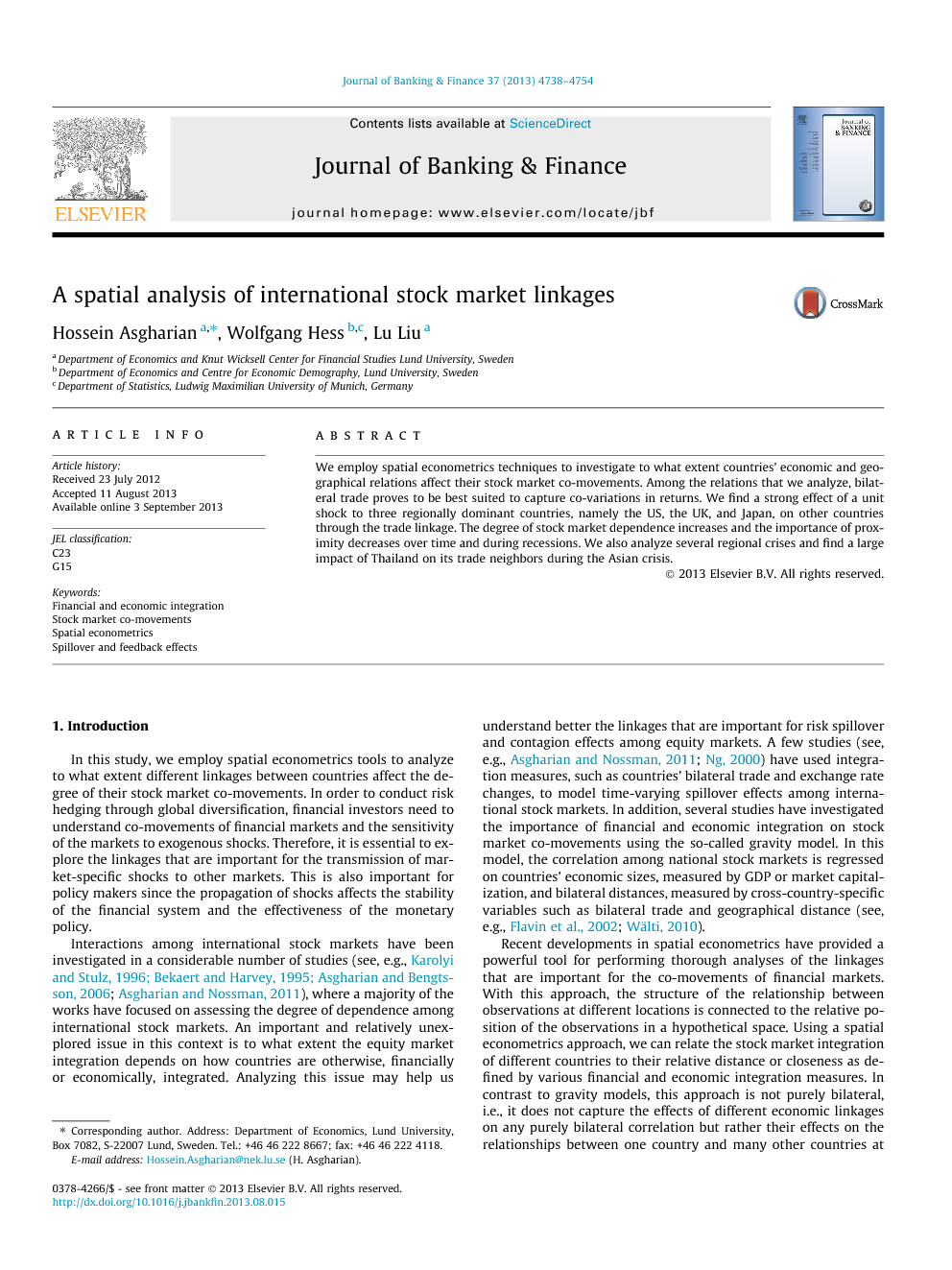 We employ spatial econometrics techniques to investigate to what extent countries’ economic and geographical relations affect their stock market co-movements. Among the relations that we analyze, bilateral trade proves to be best suited to capture co-variations in returns. We find a strong effect of a unit shock to three regionally dominant countries, namely the US, the UK, and Japan, on other countries through the trade linkage. The degree of stock market dependence increases and the importance of proximity decreases over time and during recessions. We also analyze several regional crises and find a large impact of Thailand on its trade neighbors during the Asian crisis.

In this study, we apply spatial panel econometrics techniques to investigate to what extent different linkages among countries affect the dependence among their stock market returns. Specifically, we use data on monthly returns for 41 markets between January 1995 and December 2011. We employ a number of linkages among countries in order to define their closeness in a hypothetical space: the stability of the bilateral exchange rate, convergence in expected inflation, convergence in interest rate, the existence of PPP, the existence of UIRP, bilateral trade, bilateral FDI, and geo-graphical proximity. Due to the long observation period and the large number of countries that we study, an analysis of various other potential linkages, such as the number of cross-listed stocks, was prevented by a lack of complete data. In practice, shocks or changes in macroeconomic conditions in one country affect other countries’ stock market returns through different linkages simultaneously. Moreover, different linkages may be closely related to each other (e.g., geographical distance and trade) and therefore capture similar channels of stock market interdependence. The purpose of our study is not to disentangle these effects, but to investigate to what extent each linkage separately is able to capture the dependencies among markets. We employ a spatial Durbin model throughout the analysis, which allows us to capture spatial effects from both the returns and the explanatory variables included in the model. In this model framework, a market’s returns are affected by fundamental variables, such as GDP growth, as well as by the weighted averages of other markets’ returns and fundamentals. The weights depend on the distance between markets according to the various linkages that we analyze. We test this model specification against a set of nested alternatives and perform a number of robustness analyses. Our results confirm that the spatial dependencies among markets (both through returns and through the fundamentals) contribute significantly to the return variations in our data. We assess the importance of the various linkages that we analyze by means of the estimated spatial autocorrelation coefficients, i.e., the coefficients on the weighted average of other markets’ returns. We investigate the eligibility of our linkages by comparing the respective coefficient estimates with those obtained from 200 sets of randomly generated spatial weights. Our results show that all our linkages, except FDI, outperform 95% of all possible linkages in capturing the dependencies between stock markets. When we compare our selected linkages with each other, we find that bilateral trade is the most important linkage. A likely reason for the importance of trade for stock market co-movements is its strong impact on business cycle synchronization across countries. Furthermore, we find that, irrespective of the distance measure considered, the importance of proximity decreases from the first to the second half of the sample period (i.e., before and after June 2003), whereas the entire degree of stock market dependence increases slightly over time. This may be an indication that the financial markets have become more globally integrated over time. We observe the same pattern when comparing the global recessions of 2001 and 2007–2009 with the remaining periods. Proximity tends to be less important during recessions, and the entire dependence among markets is larger. We also analyze how a unit shock to one market’s returns propagates throughout the spatial system. For this purpose, we investigate how a unit shock in three regionally dominant countries, namely the US, the UK, and Japan, affects other countries. The results indicate, among other things, that bilateral trade is the most important linkage for the transmission of shocks from the US to other markets, while the average effect of the US market on its geographical neighbors is comparably small. We also look at some specific regional crises and find a remarkable increase in the impact of Thailand on its trade neighbors during the Asian crisis. The spatial regression approach employed in this paper has at least two distinct advantages compared to previously used methods, such as the panel gravity model. First, the approach allows us to model asymmetric relationships between countries. This asymmetry stems partly from the differences in countries’ relative importance in their bilateral relationships. We capture this by allowing for asymmetries in the spatial weights. In addition, countries are not equally important globally. This source of asymmetry can be captured by allowing the spatial correlation coefficients to vary between countries. Second, the approach allows us to study the dynamics of return transmissions. In particular, we are able to show how shocks or changes in macroeconomic conditions in one country transmit throughout the spatial system. Therefore, our proposed approach is not only important for analyzing stock market integration, it also provides a suitable framework to analyze the broad subject of contagion and systemic crises such as systemic banking distress and sovereign credit risk spillover.