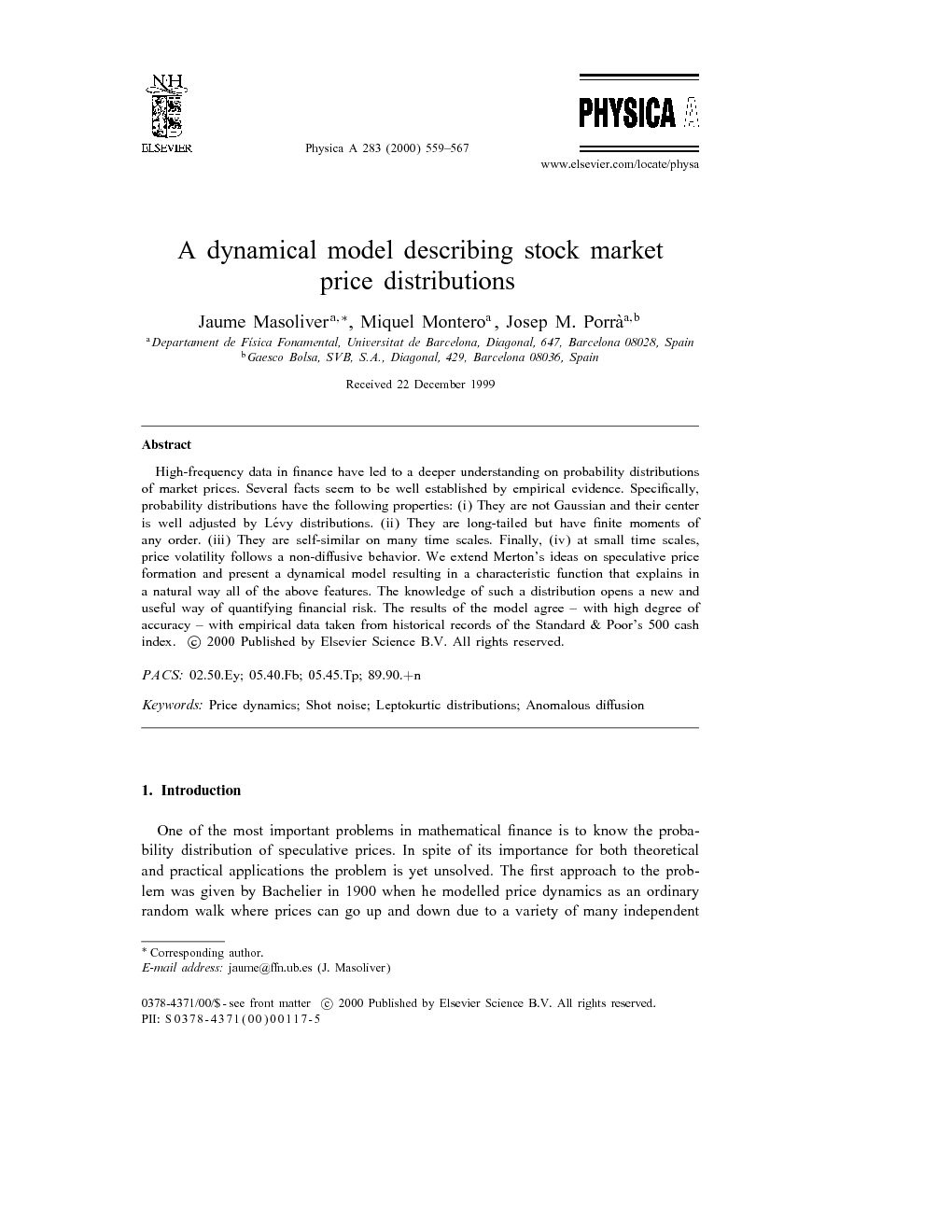 High-frequency data in finance have led to a deeper understanding on probability distributions of market prices. Several facts seem to be well established by empirical evidence. Specifically, probability distributions have the following properties: (i) They are not Gaussian and their center is well adjusted by Lévy distributions. (ii) They are long-tailed but have finite moments of any order. (iii) They are self-similar on many time scales. Finally, (iv) at small time scales, price volatility follows a non-diffusive behavior. We extend Merton's ideas on speculative price formation and present a dynamical model resulting in a characteristic function that explains in a natural way all of the above features. The knowledge of such a distribution opens a new and useful way of quantifying financial risk. The results of the model agree – with high degree of accuracy – with empirical data taken from historical records of the Standard & Poor's 500 cash index.

One of the most important problems in mathematical finance is to know the probability distribution of speculative prices. In spite of its importance for both theoretical and practical applications the problem is yet unsolved. The first approach to the problem was given by Bachelier in 1900 when he modelled price dynamics as an ordinary random walk where prices can go up and down due to a variety of many independent random causes. Consequently, the distribution of prices was Gaussian [1]. The normal distribution is ubiquitous in all branches of natural and social sciences and this is basically due to the Central Limit Theorem: the sum of independent, or weakly dependent, random disturbances, all of them with finite variance, results in a Gaussian random variable. Gaussian models are thus widely used in finance although, as Kendall first noticed [2], the normal distribution does not fit financial data especially at the wings of the distribution. Thus, for instance, the probability of events corresponding to 5 or more standard deviations is around 104 times larger than the one predicted by the Gaussian distribution, in other words, the empirical distributions of prices are highly leptokurtic. Is the existence of too many of such events, the so-called outliers, the reason for the existence of “fat tails” and the uselessness of the normal density especially at the wings of the distribution. Needless to say, the tails of the price distributions are crucial in the analysis of financial risk. Therefore, obtaining a reliable distribution has deep consequences from a practical point of view [3] and [4]. One of the first attempts to explain the appearance of long tails in financial data was made by Mandelbort in 1963 [5] who, based on Pareto–Lévy stable laws [6], obtained a leptokurtic distribution. Nevertheless, the price to pay is high: the resulting probability density function has no finite moments, except the first one. This is indeed a severe limitation and it is not surprising since Mandelbrot's approach can still be considered within the framework of the Central Limit Theorem, that is, the sum of independent random disturbances of infinite variance results in the Lévy distribution which has infinite variance [6]. On the other hand, the Lévy distribution has been tested against data in a great variety of situations, always with the same result: the tails of the distribution are far too long compared with actual data. In any case, as Mantegna and Stanley have recently shown [7], the Lévy distribution fits very well the center of empirical distributions – much better than the Gaussian density – and it also shares the scaling behavior shown in the data [7], [8], [9] and [10]. Therefore, if we want to explain speculative price dynamics as a sum of weakly interdependent random disturbances, we are confronted with two different and in some way opposed situations. If we assume finite variance, the tails are “too thin” and the resulting Gaussian distribution only accounts for a narrow neighborhood at the center of the distribution. On the other hand, the assumption of infinite variance leads to the Lévy distribution which explains quite well a wider neighborhood at the center of distribution but results in “too fat tails”. The necessity of having an intermediate model is thus clear and this is the main objective of this paper. Obviously, since the works of Mandelbrot [5] and Fama [11] on Lévy distributions, there have been several approaches to the problem, some of them applying cut-off procedures of the Lévy distribution [12] and [13] and, more recently, the use of ARCH and GARCH models to obtain leptokurtic distributions [14]. The approaches based on cut-off procedures are approximations to the distributions trying to better fit the existing data, but they are not based on a dynamical model that can predict their precise features. On the other hand, ARCH [15] and GARCH [16] models are indeed dynamical adaptive models but they do not provide an overall picture of the market dynamics resulting in a distinctive probability distribution. In fact, ARCH/GARCH models usually assume that the market is Gaussian with an unknown time-varying variance so as to be self-adjusted to obtain predictions. The paper is organized as follows. In Section 2 we proposed that stochastic model and set the mathematical framework that leads to a probability distribution of prices. In Section 3 we present the main results achieved by the model. Conclusions are drawn in Section 4.

Summarizing, by means of a continuous description of random pulses, we have obtained a dynamical model leading to a probability distribution for the speculative price changes. This distribution which is given by the following characteristic function: p~(!; t) = exp ( −a Z 1 0 z−1−[1 − h~(!zm(t))] dz ) ; (22) where m(t) = (bt)1=, depends on three positive constants: a; b, and <2. The characteristic function (22) also depends on an unknown function h~(!), the unit-variance characteristic function of jumps, also to be conjectured and tted from the tails of the empirical distribution. Therefore, starting from simple and reasonable assumptions we have developed a new stochastic process that possesses many of the features, i.e., fat tails, self-similarity, superdiusion, and nite moments, of nancial time series, thus providing us with a dierent point of view on the dynamics of the market. We nally point out that the model does not explain any correlation observed in empirical data as some markets seem to have [4,23,24]. This insuciency is due to the fact that we have modelled the behavior of returns through a mixture of independent sources of white noise. The extension of the model to include non-white noise sources and, hence, correlations will be presented soon.