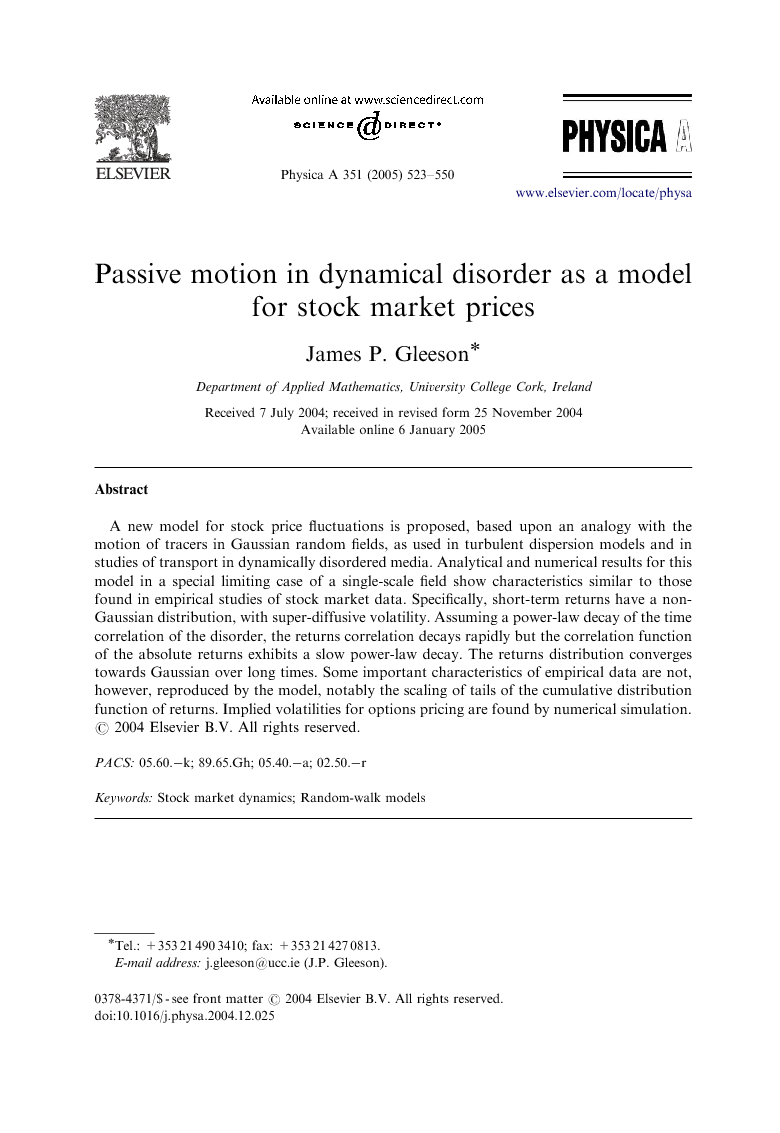 A new model for stock price fluctuations is proposed, based upon an analogy with the motion of tracers in Gaussian random fields, as used in turbulent dispersion models and in studies of transport in dynamically disordered media. Analytical and numerical results for this model in a special limiting case of a single-scale field show characteristics similar to those found in empirical studies of stock market data. Specifically, short-term returns have a non-Gaussian distribution, with super-diffusive volatility. Assuming a power-law decay of the time correlation of the disorder, the returns correlation decays rapidly but the correlation function of the absolute returns exhibits a slow power-law decay. The returns distribution converges towards Gaussian over long times. Some important characteristics of empirical data are not, however, reproduced by the model, notably the scaling of tails of the cumulative distribution function of returns. Implied volatilities for options pricing are found by numerical simulation.

We have proposed a new model for the fluctuations of stock prices, in which the rate of change of the log price is randomly dependent upon both time and the current price, see Eq. (7). This is a very general modelling concept, with the attractive feature that Gaussian Eulerian fields may give non-Gaussian Lagrangian statistics in the observable data, i.e., the time series of returns. Moreover, random field models can be derived from some simple assumptions on the behavior of trading agents (Section 2.1). As noted in Section 5, Monte Carlo simulations of Eq. (7) can be used to find the model predictions for any random field. In this paper we focus on a special case, the ε→0ε→0 limit of a single-scale random field, for which exact analytical results are obtainable, and for which numerical simulations are particularly efficient. Our main analytical results are the expression (48) for the Lagrangian velocity correlation L(t)L(t) in terms of the given Eulerian field correlation R(t)R(t), and the quadrature formulas (40) and (52) giving the correlation function and volatility of the returns. Numerical simulations of stock price time series are efficiently performed using Eq. (62), and allow us to examine features not amenable to exact analysis. We find that several of the important empirical stylized facts (i)–(iv) listed in the Introduction are reproduced by our model, using the correlation function (61) for computational convenience. The parameter values k and T are chosen by comparing the model's volatility to the data in Fig. 3(c) of Ref. [6]. With reference to the stylized facts listed in Section 1, the results of the single-scale random field model may be summarized as follows. (i) Model returns are non-Gaussian, with fat tails and the center of the distribution well-fitted by the Lévy distribution used in Ref. [5]. The tails of the cumulative distributions of model returns do not, however, have the power-law scaling found in Ref. [6]. The normalized model returns distributions exhibit a slow return toward Gaussian, on timescales an order of magnitude longer than the characteristic time of R(t)R(t). However, these timescales are an order of magnitude smaller those found for the convergence to Gaussian in the S&P500 returns in Ref. [6]. (ii) The correlation function of model returns decays quickly (similar to exponentially) over a short timescale. Following the fast decay, the correlation becomes negative, with magnitude decaying more slowly to zero. Although the fast decay for lags under 10 min is very similar that found for the S&P500 in Ref. [6], the empirical correlation function does not reach negative values, rather remaining at a constant “noise level”. Whether this noise level could be masking negative correlation values as predicted by the model is a question requiring further extensive analysis of market data. (iii) The volatility of the model returns grows diffusively for lag times longer than 10 min. The super-diffusive volatility at higher frequencies (shorter lags) is actually due to a logarithmic correction to power-law growth (53), but for the range of lags examined in Refs. [6] and [7] it matches well to a super-diffusive power-law. Higher frequency data is needed to determine which form best fits the actual stock market volatility. (iv) Our model does not have a simple scaling of P(0)P(0) with lag, in contrast to the case of S&P500 prices as demonstrated in Fig. 1 of Ref. [5]. In summary, the single-scale random field model yields time series which have many (but not all) of the important properties of empirical data. The model gives an appealingly intuitive picture of the causes of non-Gaussian behavior in markets, and provides a simple algorithm for generating time series with many market-like features. We anticipate that this algorithm will prove particularly useful in Monte Carlo simulations to determine prices of options and derivatives, as demonstrated in Section 6.1. The concept of modelling stock prices by motion in a random field is quite general—our restriction in this paper to the single-scale case is purely because of the existence of analytical results in this case. It would be very interesting to determine the sensitivity of the results obtained here to the form of the random field. As shown in Fig. 2, the small-εε limit of non-single-scale fields again leads to motion along the u=0u=0 contours, but may also include fast jumps in stock prices. We anticipate that the results presented here will be largely applicable to the contour-following motion in more general fields, but further work is required to describe the statistics of the jumps in stock price. Further work is also in progress to investigate the dependence of all results on finite values of εε, using numerical simulations of Eq. (7).