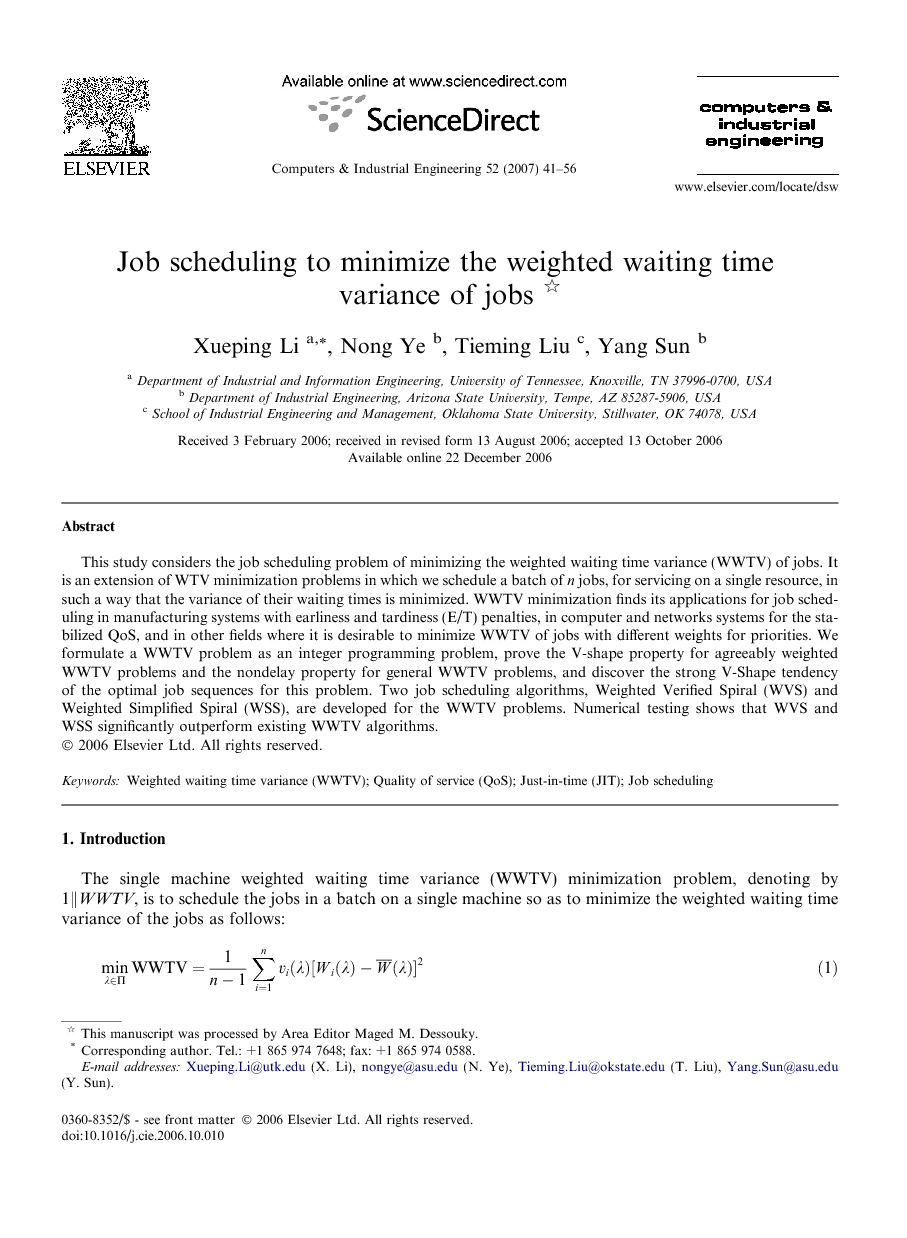 This study considers the job scheduling problem of minimizing the weighted waiting time variance (WWTV) of jobs. It is an extension of WTV minimization problems in which we schedule a batch of n jobs, for servicing on a single resource, in such a way that the variance of their waiting times is minimized. WWTV minimization finds its applications for job scheduling in manufacturing systems with earliness and tardiness (E/T) penalties, in computer and networks systems for the stabilized QoS, and in other fields where it is desirable to minimize WWTV of jobs with different weights for priorities. We formulate a WWTV problem as an integer programming problem, prove the V-shape property for agreeably weighted WWTV problems and the nondelay property for general WWTV problems, and discover the strong V-Shape tendency of the optimal job sequences for this problem. Two job scheduling algorithms, Weighted Verified Spiral (WVS) and Weighted Simplified Spiral (WSS), are developed for the WWTV problems. Numerical testing shows that WVS and WSS significantly outperform existing WWTV algorithms.

In this study we investigate the weighted waiting time variance minimization problem for a single resource on computers and networks. We formulate this problem as an integer programming problem, prove the V-shape property for agreeably weighted WWTV problems and nondelay property for general WWTV problems, find the V-Shape tendency of the optimal sequences of general WWTV problems, and develop Weighted Verified Spiral (WVS) and Weighted Simplified Spiral (WSS) heuristic methods. We test small-size and larger-size problems in which the processing times of the jobs follow different distributions. We test three weight scenarios: the weights and processing times of the jobs are positively, negatively, and randomly correlated. For all the testing problems, WVS and WSS methods are able to produce smaller WWTV than FIFO and WSPT. WVS outperforms WSS in the PW and RW scenarios while WSS can further reduce WWTV than WVS under NW weight scenario for Pareto and exponentially distributed testing problems. WSS can be applied to job scheduling on computer and network resources due to its computational efficiency and comparable performance to that of WVS. There are wide applications of WSS and WVS to schedule jobs to receive services from computer and network resources for providing QoS stability and performance dependability for jobs requesting services. For instance, WSS and WVS algorithms can be applied to a router to reduce the weighted waiting time variance of the data packets, a web server to schedule the web requests, and so on. Although we develop WVS and WSS in the context of Quality of Service on computers and networks, these job scheduling methods for service stability are also applicable to job scheduling problems in many other application fields that demand for service stability and performance dependability. For example, WVS and WSS can be applied to manufacturing production planning for scheduling jobs in a batch on a manufacturing machine. Further research can be undertaken to investigate Pm∥WWTV and Qm∥WWTV problems in which multiple machines are involved. It is of interest to find out whether the nondelay property of the optimal sequence of 1∥WWTV still holds under multiple machine environment and to develop fast algorithms for Pm∥WWTV and Qm∥WWTV.