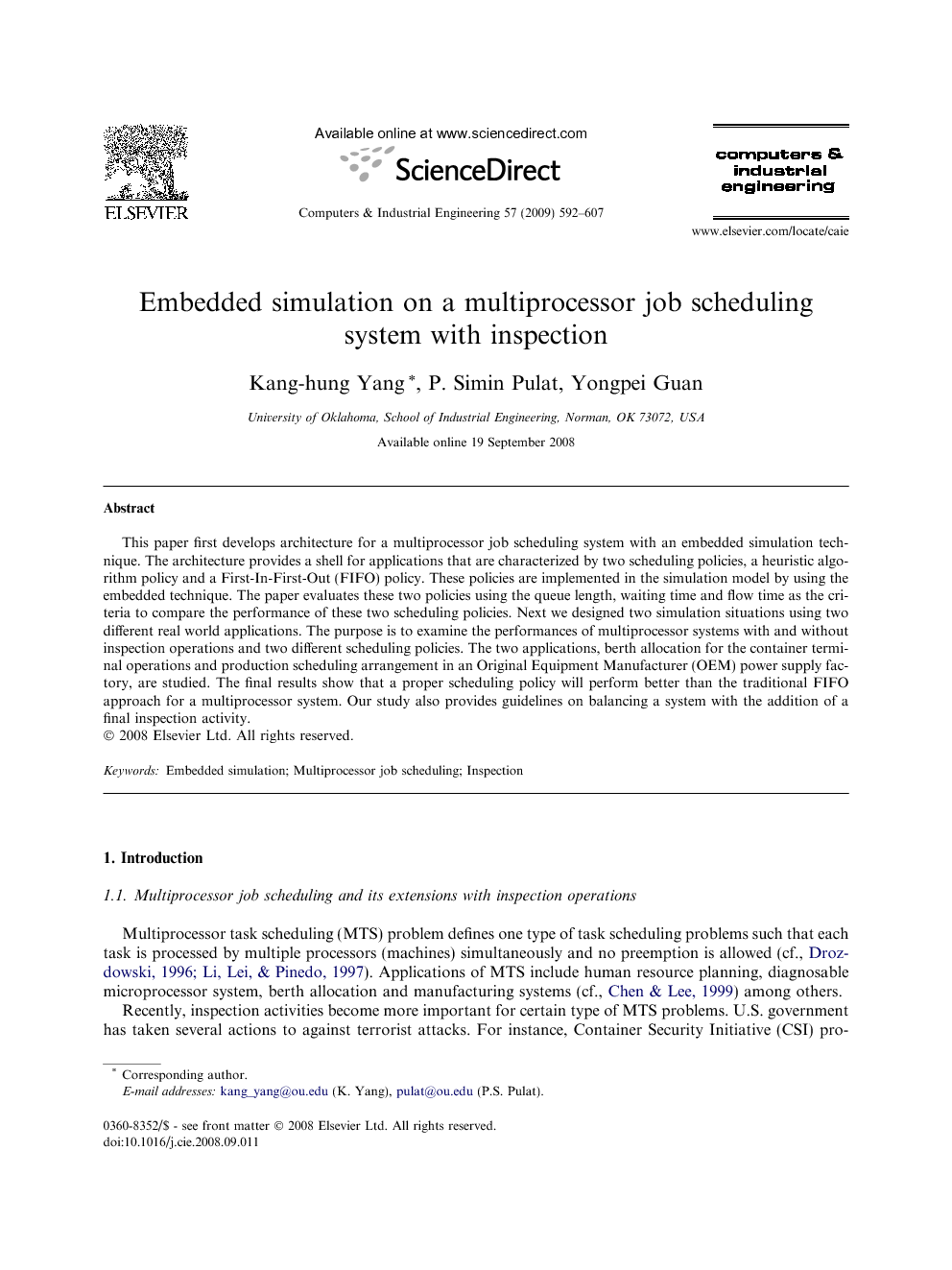 This paper first develops architecture for a multiprocessor job scheduling system with an embedded simulation technique. The architecture provides a shell for applications that are characterized by two scheduling policies, a heuristic algorithm policy and a First-In-First-Out (FIFO) policy. These policies are implemented in the simulation model by using the embedded technique. The paper evaluates these two policies using the queue length, waiting time and flow time as the criteria to compare the performance of these two scheduling policies. Next we designed two simulation situations using two different real world applications. The purpose is to examine the performances of multiprocessor systems with and without inspection operations and two different scheduling policies. The two applications, berth allocation for the container terminal operations and production scheduling arrangement in an Original Equipment Manufacturer (OEM) power supply factory, are studied. The final results show that a proper scheduling policy will perform better than the traditional FIFO approach for a multiprocessor system. Our study also provides guidelines on balancing a system with the addition of a final inspection activity.

In this paper, we studied embedded simulation techniques combining heuristic and FIFO algorithms for the MTS and MTSI problems. It is difficult to implement embedded simulations or processing algorithms into most commercial simulation software even though certain object oriented simulation software provides an interface to connect user-defined functions. AweSim is one type of process flow simulation software that provides “Event” node in which we developed optimization functions written in C++. These functions are finally combined with the simulation approaches to implement MTS and MTSI systems. Because of the nature of MTS and MTSI that one job will occupy several consecutive processors simultaneously and where preemption is not allowed, we developed the copy entity technique in the embedded system to facilitate the simulation. Based on this technique, we implemented both the heuristic and FIFO policies for MTS problems. Simulation results indicate that heuristic algorithm performs better than FIFO policy for both berth allocation and OEM factory cases. Many MTS algorithm are developed for the deterministic processing time cases. However, deterministic processing time cases rarely happen in the real world. By combining optimization and simulation approaches together, this gives us the ability to extend deterministic algorithm functions to deal with stochastic processing cases. Due to the security and quality check in the terminal operations and factory activities, in this study, we extend MTS to MTSI model. We evaluate the service rate of the inspection center so as to run the whole system smoothly. The simulation results show that the service rate of the security inspection center should be around 9 times the processor service rate for the berth allocation case, and service rate of the quality inspection center should be about 10 times of the processor service rate. In practice, it is usually hard to achieve such high service rates. The solution is to increase the inspection rates or provide more inspection centers. In a real world problem this simulation technique could be used to balance the system by adjusting certain parameters that include sampling rate at inspection stations. In general, this study has provided a way to link optimization and simulation approaches to simulate berth allocation and OEM factory cases. In the future research, we will perform mathematical modeling analysis for the MTS and MTSI problems that include the case that each processor has different work capacities. We will also consider a cost analysis of the whole process and explore ways to optimally allocate resources.