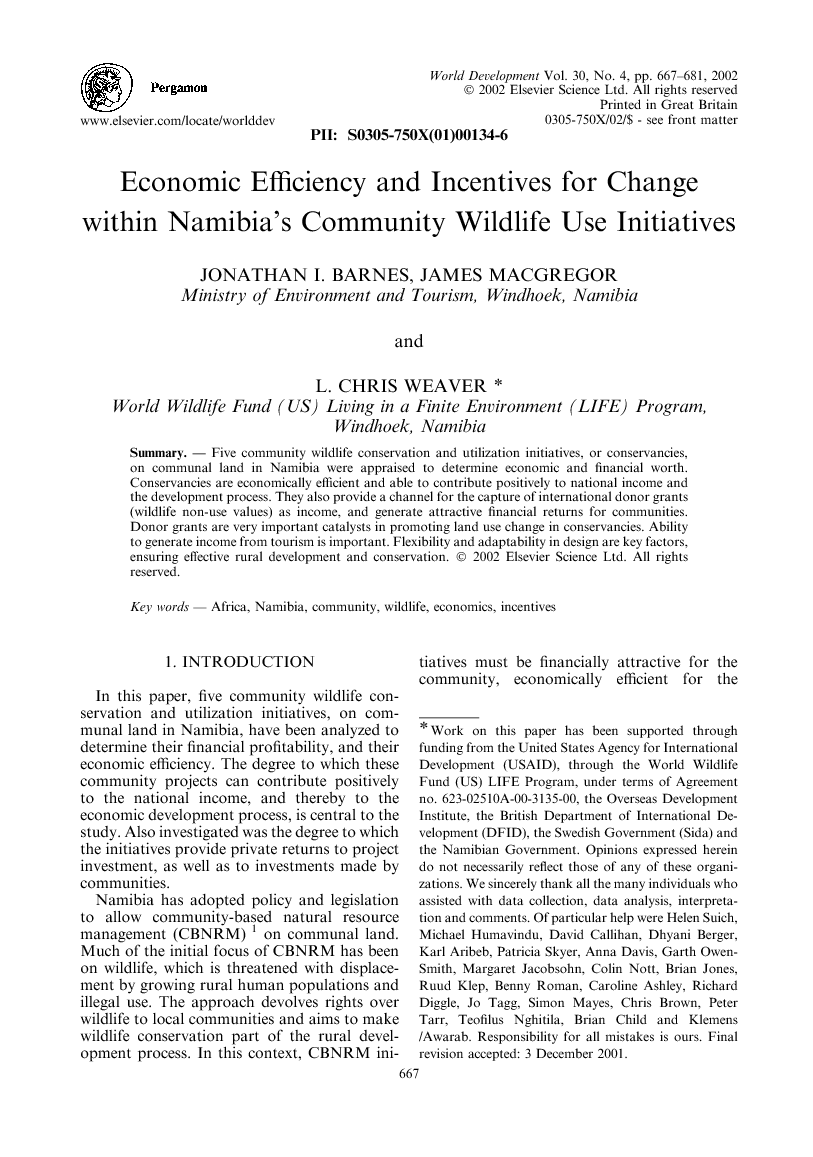 Five community wildlife conservation and utilization initiatives, or conservancies, on communal land in Namibia were appraised to determine economic and financial worth. Conservancies are economically efficient and able to contribute positively to national income and the development process. They also provide a channel for the capture of international donor grants (wildlife non-use values) as income, and generate attractive financial returns for communities. Donor grants are very important catalysts in promoting land use change in conservancies. Ability to generate income from tourism is important. Flexibility and adaptability in design are key factors, ensuring effective rural development and conservation.

(a) Conservancies in Namibia, as constituted and planned, are economically efficient. They are able to contribute positively to national income and the development process. The likelihood of their being sustainable is high. Their receipt of donor funding, as part of the national CBNRM program, means that they also provide a channel for the capture of wildlife non-use values, as income. (b) Conservancies also provide very attractive financial returns for communities. These returns are made up of income from wildlife use (direct wildlife use values) as well as donor grants (reflecting international non-use values). The latter considerably enhance the attractiveness of conservancy investment for communities, but direct use values alone, can generate positive financial returns. Donor grants perform a very important catalytic role in initiating and speeding up land use change. From the donors' perspective, conservancies also tend to be financially viable. (c) Tourism (primarily nonconsumptive tourism but also safari-hunting tourism) is a particularly important income generator for all conservancies. In the development of tourism, joint ventures between private investors, with skills and access to markets, and communities are very important. Other consumptive wildlife and natural resource uses are less important, but they serve usefully to spread risk. (d) The existence of natural wildlife populations on conservancies (reducing the need for investments in stock) is a very significant factor affecting the economic efficiency and financial viability of conservancies. Acquisition of stock for restocking is not economically efficient at the conservancy level, unless there are no opportunity costs involved. It can, however, have wider, longer term economic benefits. (e) Flexibility and adaptability in design has allowed Namibia's conservancy initiatives to embrace an apparently sound rural development framework, which includes significant intangible values and benefits as well as financial income for communities, derived from both use and non-use. The conservancies appear able to deliver positive financial incentives to communities, contribute positively to national development, conserve wildlife, and be at least as sustainable as other rural development initiatives.