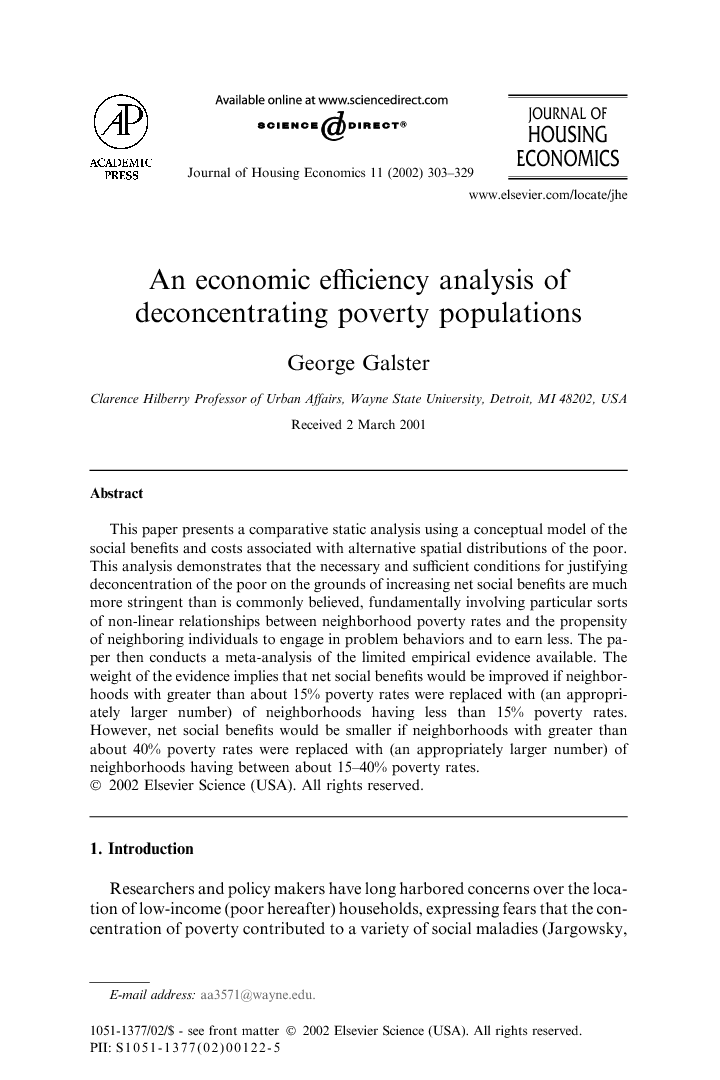 Researchers and policy makers have long harbored concerns over the location of low-income (poor hereafter) households, expressing fears that the concentration of poverty contributed to a variety of social maladies (Jargowsky, 1997; Wilson, 1987 and Wilson, 1996). More recently, the issues related to the spatial distribution of the poor have been framed more positively. Housing subsidy programs, it has been argued, should be structured to give poor households wider residential options. This enrichment of spatial alternatives would not only serve to improve the well-being of housing subsidy recipients in the short run, but also their families’ prospects for economic self-sufficiency in the long run, by enhancing their access to employment and job information networks, better-quality education, and community social norms more supportive of education and employment (Cisneros, 1995; Polikoff, 1994; Rosenbaum, 1995). It is noteworthy that the arguments have almost entirely been framed in terms of reputed benefits gained by poor households that move from high- to lower-poverty neighborhoods, not in terms of the consequences for households residing in the places from which and to which the poor move. Nevertheless, this set of arguments has been sufficiently persuasive to generate an array of federal legislative and judicial initiatives. These include replacing high-rise public housing complexes with small-scale, scattered-site units, court-ordered dispersal programs for minority populations as a remedy to past discrimination by public housing authorities, and the encouragement of spatial mobility by section 8 housing subsidy recipients through the Moving To Opportunity demonstration and the Regional Opportunity Counseling Program (Burchell et al., 1994; Goering et al., 1995; Hogan, 1996; Ludwig and Stolzberg, 1995; Peterson and Williams, 1996; US Department of HUD, 1996). This paper analyzes theoretically and empirically whether the current housing policy emphasis on deconcentrating poor populations can be justified on the grounds of economic efficiency, i.e., does society as a whole gain from switching from a more- to a less-concentrated poverty regime, without recourse to claims of distributional equity? It presents a comparative static analysis using a general model of the social benefits and costs associated with alternative spatial distributions of the poor. It then reviews existing evidence to ascertain which functional form and parameters of the model are most appropriate, and draws implications about the efficiency of alternative spatial distributions of the poor. This represents the paper’s main contribution: synthesizing and interpreting evidence in an economics-based theoretical framework that leads to housing policy conclusions of great current relevance. More particularly, a graphic analysis first is provided to demonstrate heuristically, using a wide variety of potential functional forms, how differences in the curvature of the function relating neighborhood poverty rates to individuals’ propensities to earn income or engage in problematic behaviors generate different conclusions about the efficiency of deconcentrating the poor. Second, it makes the same argument more formally with a mathematical optimization of a particular class of social benefit and cost functions. Third, it conducts a meta-analysis of empirical work related to the non-linear external effects of neighborhood poverty to see what functional form(s) of social cost and benefit relationships seem most likely and, by implication, the degree to which poverty deconcentration is justified on empirical grounds of social efficiency. The emphasis on social efficiency in this paper should not be taken as an implicit claim that distributional equity concerns are of less importance. On the contrary, distributional concerns are omitted purely for the purpose of isolating efficiency impacts. The paper concludes that, based on empirical evidence related to a very general set of models that makes no claims about distributional equity, tenuous support can be given for the hypothesis that deconcentrating the poor will improve net social benefits, but only if the result is fewer neighborhoods with extremely high poverty and more with a modicum of poverty, not more with moderate poverty rates. The current paper intersects with three closely related literatures. First, earlier work on peer group effects in educational production functions (Arnott and Rowse, 1987; Henderson et al., 1978) made the point that the curvature of the function relating educational outcomes to ability diversity within the classroom determined the optimal degree of such diversity. I follow a similar strategy in developing the theoretical and empirical argument as the seminal paper by Arnott and Rowse (1987), but apply it to the case of how to optimally distribute poor and non-poor residents across neighborhoods. Unlike them, who take parameters from two empirical studies to illustrate possible variations in optimal distributions with different peer effects, I conduct a meta-analysis in an attempt to ascertain if there is consensus about the functional form and key parameter values of the neighborhood poverty externality effects. Second, economic models have been developed (e.g., Benabou, 1993 and Benabou, 1996; Fernandez and Rogerson, 1996) of how residential segregation of different income groups, coupled with certain local school finance structures, can have efficiency consequences for the society when there are local complementarities among residents/students in human capital development. Unlike this work, however, I: (1) consider a broader range of neighborhood effects than education, (2) make minimal assumptions about the precise nature of social interactions, and (3) attempt to bound key parameters through a meta-analysis of extant empirical studies on neighborhood effects, instead of doing solely a purely theoretical exercise. Finally, Johnson and colleagues (Johnson, 2002; Johnson and Hurter, 1999 and Johnson and Hurter, 2000; Johnson et al., 2002) have worked to develop a scientific management algorithm for administrators of subsidized housing programs that would help guide their decisions of where to place subsidized units. As is the case in this paper, their algorithms seek to maximize social efficiency by the optimal allocation of the poor across space, they assume externality effects from neighborhood poverty, and they try to bound key parameters by scanning empirical literature. The current paper places more emphasis on the sensitivity of the optimal allocation on the nature of the neighborhood poverty externality function and explores the implications of more variants of this function.

In order to assess the social efficiency of alternative spatial distributions of low-income populations, one must identify the mathematical way in which the percentage of poor residents in a neighborhood affects all residents’ incomes and problem behaviors. It is insufficient to claim that “neighborhood effects are important,” or “the poor benefit when they move to lower poverty neighborhoods.” Only if the relationships between neighborhood poverty rate and individuals’ social costs associated with problem behaviors and/or incomes show that the marginal impact is much stronger in higher-poverty areas than in lower-poverty areas can deconcentration of the poor be justified on grounds of improving net social benefits, independent of equity considerations. Advocates of subsidized housing programs for deconcentrating the poor thus confront a daunting challenge in providing appropriately detailed empirical evidence in support of their position. In particular, the foregoing renders moot the core evidence that has been so frequently cited in the past to justify the current policy directions: Chicago’s Gautreaux program, as evaluated by Rosenbaum and his colleagues (Rosenbaum, 1995). That is, discovering that poor people have higher income and fewer problem behaviors when a small number of them move to low-poverty, suburban neighborhoods simply is insufficient on efficiency grounds, inasmuch as it does not investigate any possible external effects upon neighbors in recipient communities, or those in areas left behind. The appropriate empirical evidence is exceedingly sparse. The weight of these studies tentatively suggests, however, that both income and (to a less consensual degree) behavioral problems are related to neighborhood poverty rates in a logistic or step-function fashion wherein non-zero marginal changes are only associated with the range of approximately 15–40% poverty. This implies that net social benefits will be larger if neighborhoods with greater than roughly 15% poverty rates are replaced with (an appropriately larger number) of neighborhoods having less than 15% poverty rates. However, net social benefits will be smaller if neighborhoods with greater than about 40% poverty rates are replaced with (an appropriately larger number) of neighborhoods having between about 15–40% poverty rates. Put more bluntly in policy terms, unless very low-poverty neighborhoods can be opened up for occupation by the poor, deconcentration efforts should halt, because merely transferring the poor from high- to moderate-poverty neighborhoods is likely to be socially inefficient. But this conclusion can only be forwarded with the utmost circumspection, given the numerous assumptions of the conceptual model and the limited scope and somewhat inconsistent results of extant empirical studies. The simplifying assumptions have been noted previously, but their implications for the conclusions above should be addressed. First, the external impacts of neighborhood poverty were modeled as independent of public services and the efficiency of their delivery. It is arguable that, on the contrary, consequences of concentrated poverty may be more effectively countered by public interventions that are tailored most efficiently when the poor are most concentrated. For example, targeting of scarce police resources and the resulting deterrent effect may only be possible if crime were concentrated in a few areas. Such arguments, if valid, would weaken the social efficiency case for poverty deconcentration. Second, income served as a proxy for social benefit, without regard for who earned that income, i.e., equal welfare weights to all earners were applied. It is clear that in the current model the concentrated poor will have higher income in the deconcentrated regime and the non-poor will have lower income. Thus, if we added the provisos that either the marginal utility of income is greater for the poor than the non-poor (on average) or the society valued a marginal dollar of income more in the hands of the poor than the non-poor, the rationale for deconcentration would be further strengthened. Third, neighborhood externality effects were assumed independent of income. It might be reasonable, instead, to posit that the poor were more vulnerable to neighborhood poverty externalities than the non-poor, perhaps because the poor have fewer resources upon which to fall back (cf. Clark, 1992; Crane, 1991; Duncan, 1994). Under this alternative, the efficiency case for deconcentration would be strengthened. Fourth, the empirical evidence cited in this paper is not only thin but arguably suffers from methodological shortcomings. The robustness of these findings has been challenged on the following grounds: (a) inappropriate geographic scale of the neighborhood; (b) inappropriate measures of the neighborhood as causal agent; (c) inadequate controls for individual family background characteristics; and (d) endogeneity between choice of neighborhood and unmeasured family characteristics (Duncan et al., 1997; Duncan and Raudenbush, 1999; Evans et al., 1992; Manski, 1993; Plotnick and Hoffman, 1999). Clearly, considerably more empirical evidence is needed before one can be convinced about the social efficiency of deconcentrating poverty populations. Hopefully, research using data produced through a random-assignment experiment by HUD’s ongoing Moving To Opportunity demonstration will provide an opportunity for such efforts to be focused on identifying potential non-linear external impacts of neighborhood poverty rates.