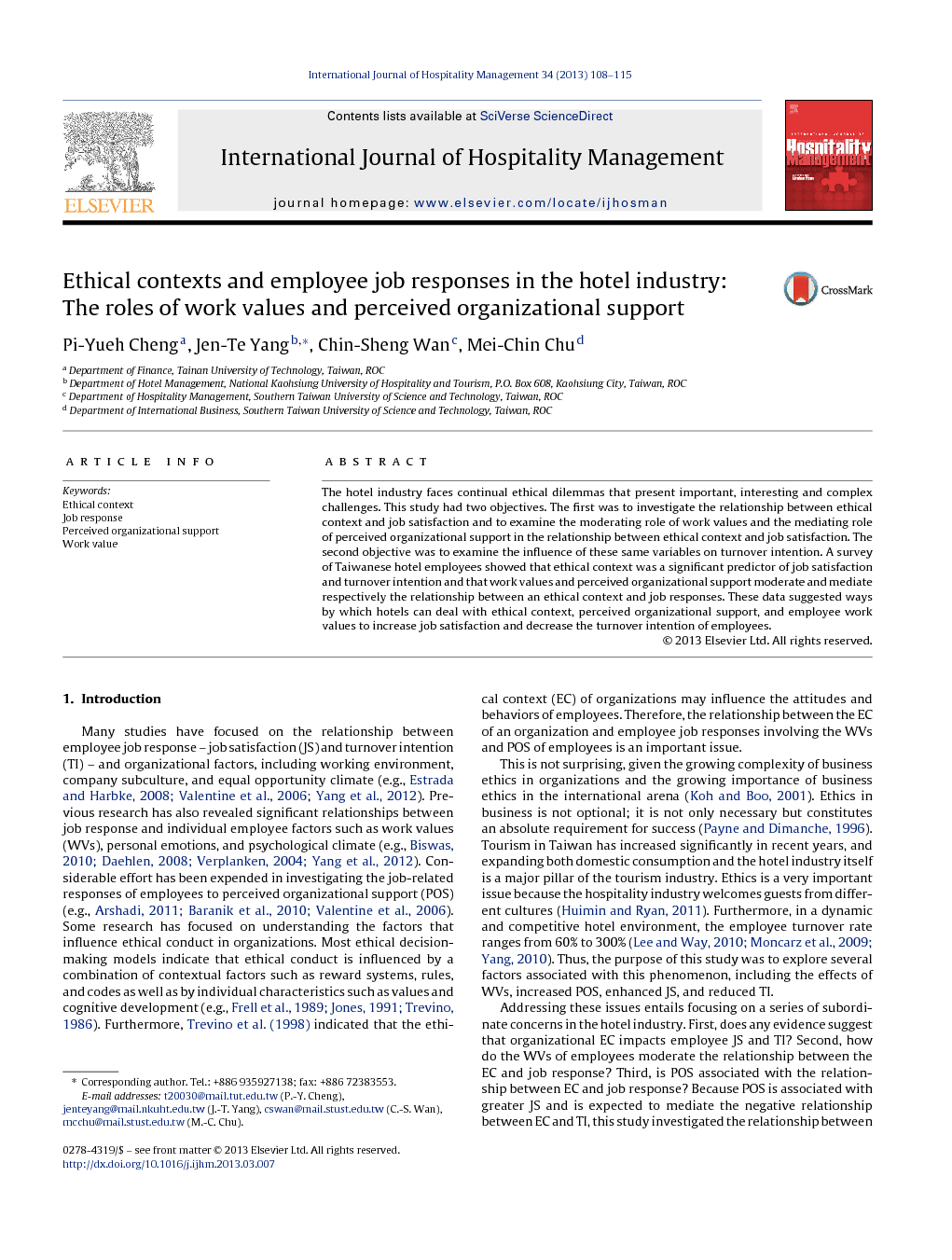 Many studies have focused on the relationship between employee job response – job satisfaction (JS) and turnover intention (TI) – and organizational factors, including working environment, company subculture, and equal opportunity climate (e.g., Estrada and Harbke, 2008, Valentine et al., 2006 and Yang et al., 2012). Previous research has also revealed significant relationships between job response and individual employee factors such as work values (WVs), personal emotions, and psychological climate (e.g., Biswas, 2010, Daehlen, 2008, Verplanken, 2004 and Yang et al., 2012). Considerable effort has been expended in investigating the job-related responses of employees to perceived organizational support (POS) (e.g., Arshadi, 2011, Baranik et al., 2010 and Valentine et al., 2006). Some research has focused on understanding the factors that influence ethical conduct in organizations. Most ethical decision-making models indicate that ethical conduct is influenced by a combination of contextual factors such as reward systems, rules, and codes as well as by individual characteristics such as values and cognitive development (e.g., Frell et al., 1989, Jones, 1991 and Trevino, 1986). Furthermore, Trevino et al. (1998) indicated that the ethical context (EC) of organizations may influence the attitudes and behaviors of employees. Therefore, the relationship between the EC of an organization and employee job responses involving the WVs and POS of employees is an important issue. This is not surprising, given the growing complexity of business ethics in organizations and the growing importance of business ethics in the international arena (Koh and Boo, 2001). Ethics in business is not optional; it is not only necessary but constitutes an absolute requirement for success (Payne and Dimanche, 1996). Tourism in Taiwan has increased significantly in recent years, and expanding both domestic consumption and the hotel industry itself is a major pillar of the tourism industry. Ethics is a very important issue because the hospitality industry welcomes guests from different cultures (Huimin and Ryan, 2011). Furthermore, in a dynamic and competitive hotel environment, the employee turnover rate ranges from 60% to 300% (Lee and Way, 2010, Moncarz et al., 2009 and Yang, 2010). Thus, the purpose of this study was to explore several factors associated with this phenomenon, including the effects of WVs, increased POS, enhanced JS, and reduced TI. Addressing these issues entails focusing on a series of subordinate concerns in the hotel industry. First, does any evidence suggest that organizational EC impacts employee JS and TI? Second, how do the WVs of employees moderate the relationship between the EC and job response? Third, is POS associated with the relationship between EC and job response? Because POS is associated with greater JS and is expected to mediate the negative relationship between EC and TI, this study investigated the relationship between EC and job responses, and examined the moderating role of WVs and the mediating role of POS.

This study examined the factors that influence employee job satisfaction (JS) and turnover intention (TI) and found that perceived organizational support (POS) had a significant indirect effect on these variables. The extent to which a hotel establishes a healthy organizational climate by nurturing ethical practices and behaviors is positively associated with the degree of individual JS and negatively associated with the rate of TI. Indeed, an organization's EC incorporates components of individual WVs and POS. Previous studies have indicated that social exchange theories explain employment as an exchange of effort and loyalty for tangible benefits and social rewards (e.g., March and Simon, 1958 and Organ and Konovsky, 1989). Thus, hotels may use pay, promotion, and job enrichment to enhance employee POS when employees believe that these rewards are the results of the organization's voluntary actions (Rhoades and Eisenberger, 2002). Consequently, ethical practices that are based on consideration of individual WVs and POS strengthen organizational performance in the long run. This study has a number of limitations. First, research on ethics is likely to elicit socially desirable responses. However, the present study assessed employees’ perceptions of their firm's environment rather than the ethics of individuals. Moreover, the prevalence of socially desirable responses may have been reduced by having employees return questionnaires directly to the researcher without giving their supervisors an opportunity to view their responses. Indeed, some research indicates that anonymity contributes to reducing the prevalence of socially desirable responses (Randall and Fernandes, 1991). Second, the current study used a cross-sectional design and relied on self-reporting. A longitudinal design would be appropriate for elucidating the causal relationship between predictive and criterion variables. Third, our research approach raises issues related to common method variance (Cote and Buckley, 1988); however, consideration of the data-collection method can at least allay concerns about method variance. Additionally, the length and wording of the questionnaire may have caused participants to spend undue time completing the measure (Podsakoff et al., 2003). The generalizability of our findings should be treated with caution. Employee factors such as personality and demographic characteristics (such as gender, age, work experience, job positions) may influence employees’ POS (Rhoades and Eisenberger, 2002 and Witt and Hellman, 1992). Future research should investigate whether different employee characteristics influence employee POS and examine the mechanism by which the relationship between EC and job response is mediated. EC has been represented primarily by two multidimensional constructs: ethical climate and ethical culture. Trevino et al. (1998) showed that these have similar effects on organizational commitment. Therefore, future research should focus individually on ethical climate and ethical culture as predictive factors.