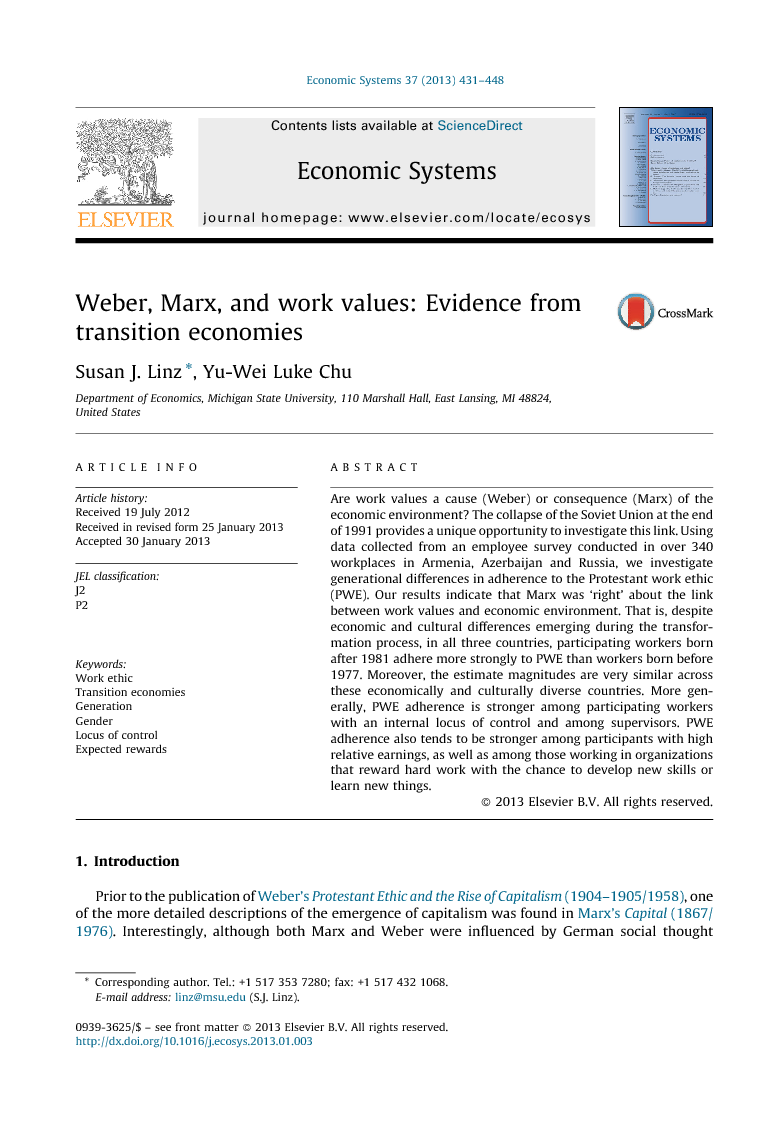 Are work values a cause (Weber) or consequence (Marx) of the economic environment? The collapse of the Soviet Union at the end of 1991 provides a unique opportunity to investigate this link. Using data collected from an employee survey conducted in over 340 workplaces in Armenia, Azerbaijan and Russia, we investigate generational differences in adherence to the Protestant work ethic (PWE). Our results indicate that Marx was ‘right’ about the link between work values and economic environment. That is, despite economic and cultural differences emerging during the transformation process, in all three countries, participating workers born after 1981 adhere more strongly to PWE than workers born before 1977. Moreover, the estimate magnitudes are very similar across these economically and culturally diverse countries. More generally, PWE adherence is stronger among participating workers with an internal locus of control and among supervisors. PWE adherence also tends to be stronger among participants with high relative earnings, as well as among those working in organizations that reward hard work with the chance to develop new skills or learn new things.

We use data collected from employees in over 340 workplaces in Armenia, Azerbaijan and Russia to investigate whether individuals who were trained and worked in the former Soviet economy (older generation workers) adhere more or less strongly to PWE than individuals with no work experience in the former socialist economy (young generation workers). We find PWE adherence to be most strong among young generation workers, with the estimate magnitudes very similar across these three culturally and economically diverse countries. Our results provide robust evidence for generational differences in PWE adherence among workers in formerly socialist economies, differences which cannot be explained either by worker personality or by various firm characteristics. Moreover, the result that young generation workers adhere more strongly to PWE than older workers stands in contrast to generational differences reported in studies conducted in developed market economies where older workers adhere more strongly to PWE ( Smola and Sutton, 2002 and Twenge, 2010). Thus, we view these results as evidence in support of the link between work values and economic environment described by Marx, noting that future research, using repeated cross-sectional data or panel data to directly estimate the potential dynamic response of PWE to economic transition, is certainly warranted.