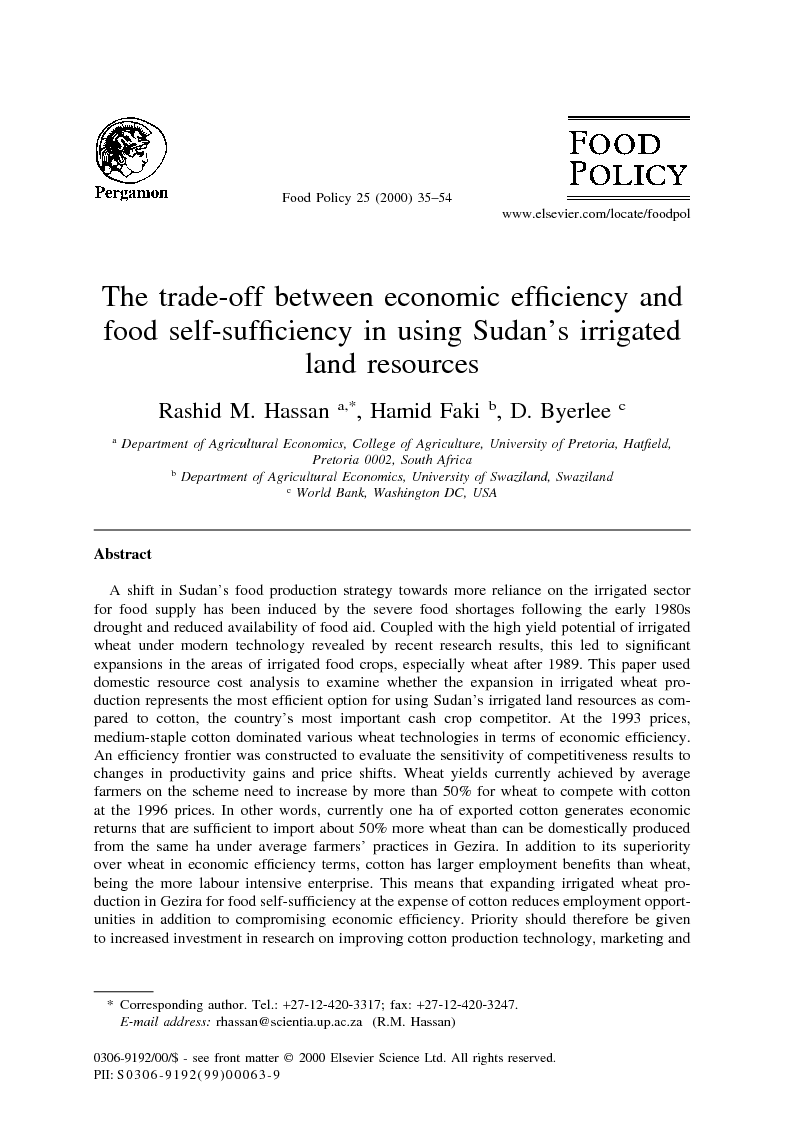 A shift in Sudan's food production strategy towards more reliance on the irrigated sector for food supply has been induced by the severe food shortages following the early 1980s drought and reduced availability of food aid. Coupled with the high yield potential of irrigated wheat under modern technology revealed by recent research results, this led to significant expansions in the areas of irrigated food crops, especially wheat after 1989. This paper used domestic resource cost analysis to examine whether the expansion in irrigated wheat production represents the most efficient option for using Sudan's irrigated land resources as compared to cotton, the country's most important cash crop competitor. At the 1993 prices, medium-staple cotton dominated various wheat technologies in terms of economic efficiency. An efficiency frontier was constructed to evaluate the sensitivity of competitiveness results to changes in productivity gains and price shifts. Wheat yields currently achieved by average farmers on the scheme need to increase by more than 50% for wheat to compete with cotton at the 1996 prices. In other words, currently one ha of exported cotton generates economic returns that are sufficient to import about 50% more wheat than can be domestically produced from the same ha under average farmers' practices in Gezira. In addition to its superiority over wheat in economic efficiency terms, cotton has larger employment benefits than wheat, being the more labour intensive enterprise. This means that expanding irrigated wheat production in Gezira for food self-sufficiency at the expense of cotton reduces employment opportunities in addition to compromising economic efficiency. Priority should therefore be given to increased investment in research on improving cotton production technology, marketing and lint quality. On the other hand, it is important to introduce more effective policy measures for faster adoption of improved wheat technologies to close the gap between potential and current yield levels.

The proportion of irrigated land devoted to food production has been steadily increasing in the Sudan over the past two decades. The severe shortages in food supply experienced in the Sudan after the three-years drought of the early 1980s reduced availability of wheat aid, and the encouraging results of on-farm testing of improved wheat production practices were considered the main reasons behind the recent striving by the Sudan for self-sufficiency in food, particularly wheat. Relative profitability analysis and the DRC methodology were used to evaluate the comparative advantage of the existing and potential wheat technologies versus cotton in the Gezira to determine if wheat expansion represents the most efficient option for using Sudan's irrigated land resources. Results of the profitability analysis showed that the production of both wheat and cotton is heavily taxed under the current pricing and credit policies in Sudan. The tax was, however, higher on cotton growers. At the 1993 trend prices, medium-staple cotton dominated various wheat technology levels in the Gezira in terms of economic efficiency. Sensitivity analysis showed that for high-technology wheat to become the most efficient alternative in Gezira the world wheat price has to be 20% higher than its long-run trend. As the Sudan currently imports wheat at a price much higher than the long-run trend price, high-technology wheat revealed comparative advantage over cotton at the actual 1996 prices. However, average yields in the Gezira are much lower than potential yields obtained under the full package of improved wheat technologies. This suggests that it may not be economically efficient for Sudan at present to expand wheat production at the expense of cotton in Gezira. Before more land and water are switched from producing cotton to wheat, the gap between potential and farmer's wheat yields needs to be closed so as to make wheat farming in Gezira efficient. According to sensitivity analysis results, the Gezira tenants who currently produce wheat using traditional methods would have to improve their yield levels by more than 50% to compete with cotton at the 1996 price levels, i.e. from 1.28 t/ha to 1.95 t/ha. As it is highly unlikely that all wheat farmers can achieve this yield level at all locations in the scheme, priority should be given to cotton production in Gezira. This is also reinforced by the recent trends in world price movements in favour of cotton. Moreover, in addition to its superiority over wheat in economic efficiency terms, cotton has larger employment benefits than wheat being the more labour intensive enterprise. This means that expanding the area of irrigated wheat in Gezira for food self-sufficiency at the expense of cotton production reduces employment opportunities on the scheme in addition to compromising economic efficiency. The economy-wide benefits to be realised through broader economic growth linkages from higher employment are expected to be significant. Reduced employment of agricultural labour also has considerable negative implications for the food security of farm labour households. It is therefore more important for Sudan to invest more resources in research on improving production technology, marketing processes and the lint quality of its cotton crop. This is crucial for the question of economic efficiency, as potential yield gains from improved wheat production methods need to be weighed against potential gains from higher prices of finer quality cotton. Nevertheless, as wheat will continue to use at least part of its maximum allowable share of the land according to the crop rotation, efforts should be directed to removing the obstacles to higher and faster adoption of improved wheat production technologies tested and verified by the ARC in the Gezira. Input procurement and delivery systems need to be liberalised for more efficient and timely utilisation of modern inputs. More flexibility is also needed in allocating land and other resources among competing crops within the public irrigation schemes so that employment of domestic resources can respond to changing international economic opportunities. Wheat areas need to be tailored to the levels of input availability if adequate and timely input delivery cannot be provided for all planned areas. On-farm verification of the new wheat technology in the Gezira should continue, particularly at locations where water shortages are severe, to realise the true range of yields that can realistically be achieved in the Gezira Scheme. Adaptive research should attempt to modify the package of wheat technologies currently promoted by ARC to suit different locations in the scheme. While market distortions are relatively easy to eliminate through more liberal policies for input procurement and allocation, improving the supply and distribution of irrigation water may not be as easy. This will require substantial investments in rehabilitation of the existing irrigation infrastructure to increase the carrying capacity and conveyance efficiency as well as the overall water supply to the scheme.