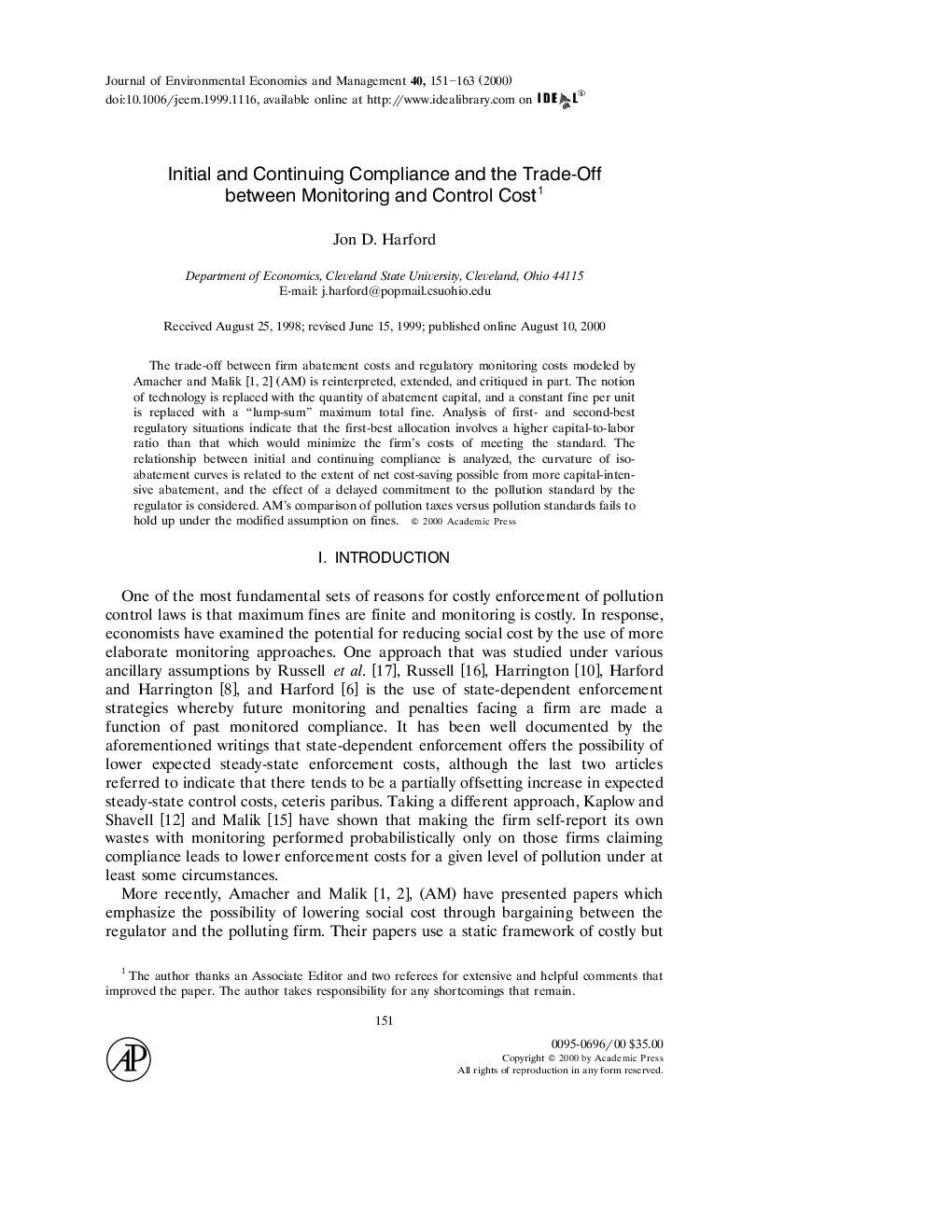 The trade-off between firm abatement costs and regulatory monitoring costs modeled by Amacher and Malik [1, 2] (AM) is reinterpreted, extended, and critiqued in part. The notion of technology is replaced with the quantity of abatement capital, and a constant fine per unit is replaced with a “lump-sum” maximum total fine. Analysis of first- and second-best regulatory situations indicate that the first-best allocation involves a higher capital-to-labor ratio than that which would minimize the firm's costs of meeting the standard. The relationship between initial and continuing compliance is analyzed, the curvature of iso-abatement curves is related to the extent of net cost-saving possible from more capital-intensive abatement, and the effect of a delayed commitment to the pollution standard by the regulator is considered. AM's comparison of pollution taxes versus pollution standards fails to hold up under the modified assumption on fines.

If regulators had the power to determine precisely how much capital Žand possibly what kind. constitutes initial compliance, then the process of negotiation from a second-best threat point is unnecessary. However, for AM’s and the present version of second-best standard setting to be logically consistent, it must be true that the regulator can costlessly and accurately measure the quantity of abatement capital that the firm installs. If a regulator had such monitoring capabilities, it could be seen as arbitrary that he would not be allowed to use them to achieve first-best outcomes. Obviously, there could be many reasons for restraining regulatory discretion, and, in any case, empirical knowledge of regulatory discretion regarding the trade-offs considered here does not appear to be very precise. To the degree that monitoring abatement capital is relatively cheaper than monitoring pollution, there is an argument against the universal use of instruments such as tradable pollution permits which presume a relatively unchanging perfor mance standard for each firm. Yet, Title IV of the Clean Air Act Amendments of 1990 created the ability for electric utilities to trade pollution emission allowances in sulfur dioxide. Schmalensee et al. 20 discuss the outcomes of the program and mention that the required continuous monitoring had an average annual cost of about $124,000 per source Žp. 55.. In the period discussed, there were approximately 440 sources for an estimated total annual monitoring cost of $54.6 million. The annual savings from the program due to the reduction in total cost of controlling emissions were placed in the range $225 to $375 million per year Žp. 64.. While these numbers are not precise, it would seem that savings in monitoring cost from using low-cost observations on abatement capital would not, in this case, justify a move away from standards based on emissions alone. Of course, these savings are based upon electric utilities being able to make trades based upon cost information that regulators could not know, or were unable to use, in setting the individual firm standards in the first place, an informational situation not reflected in the AM papers or this one. In other contexts, including the early days of pollution regulation, the accuracy and costliness of monitoring emissions directly could well offer a justification for ‘‘technological’’ standards to a greater degree than that suggested by this example and many environmental economics textbooks. The reality is that continuous compliance has been relatively less common than initial compliance. One needs a more complicated model than the one offered here to account for such a pattern. Such a model would have elements of asymmetric information, symmetric uncertainty, or both. To consider one scenario, suppose firms vary Žonly. in their abatement production functions in ways not observable by the regulator. In this setting, the regulator would presumably set a common capital standard, a common pollution standard, and a common monitoring probability for all firms. Given that it will probably not be worthwhile to have the monitoring probability high enough to ensure compliance for firms of the highest cost types, some firms may comply with the capital standard and not the pollution standard. Letting K1 be the capital standard, p1 be the monitoring probability, and L1i be the amount of labor needed for firm i to comply with the pollution standard s1, firm i will comply with the capital standard and not comply with the pollution standard when the inequalities ŽrK1p1F.F and p1FwL1i both hold. Two other features that may account for high initial compliance with much lower rates of continuing compliance are uncertainty of pollution measurement and uncertainty of pollution control compared to the relative certainty of these dimensions with regard to control capital. Given the costliness of accurate measurement of pollution, the optimal accuracy is likely to leave significant random error in measuring pollution. Since an operational standard can only be based on such measurement, there are bound to be ‘‘violations’’ simply due to random measurement error. Thus, differences in measurement accuracy could account for some differences in violation rate. The argument involving controllability is very similar. ‘‘Random’’ variations in pollution due to equipment failures will sometimes lead to violations of any given pollution standard. Of course, if one could measure ‘‘effort’’ to control pollution with perfect accuracy and low cost, then a standard based on effort would avoid this issue. One expects that more formal analyses along these lines, combined with additional information on actual trade-offs, will clarify the value of these ideas in modeling the observed pattern of compliance.