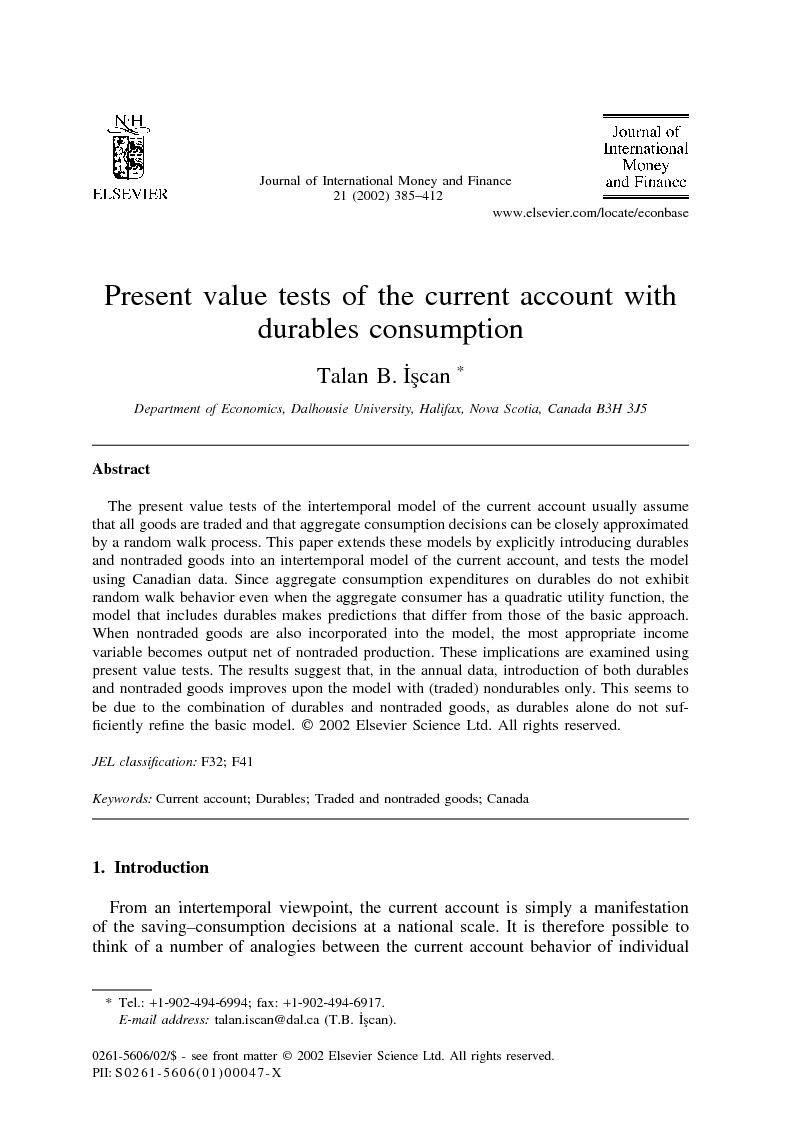 The present value tests of the intertemporal model of the current account usually assume that all goods are traded and that aggregate consumption decisions can be closely approximated by a random walk process. This paper extends these models by explicitly introducing durables and nontraded goods into an intertemporal model of the current account, and tests the model using Canadian data. Since aggregate consumption expenditures on durables do not exhibit random walk behavior even when the aggregate consumer has a quadratic utility function, the model that includes durables makes predictions that differ from those of the basic approach. When nontraded goods are also incorporated into the model, the most appropriate income variable becomes output net of nontraded production. These implications are examined using present value tests. The results suggest that, in the annual data, introduction of both durables and nontraded goods improves upon the model with (traded) nondurables only. This seems to be due to the combination of durables and nontraded goods, as durables alone do not sufficiently refine the basic model.

This paper has incorporated durables and nontraded goods consumption into a simple model of the current account, and examined whether these novel properties help to improve the empirical performance of the model. Our starting point was based on the empirical finding, among others, that the Canadian current account fails the econometric tests of the simple baseline model. The paper has asked whether this failure can partly be attributed to the omission of durables and nontraded from the analysis. In the annual data with a relatively high interest rate, the answer to this question appears to be affirmative. The quarterly data, however, reject the basic restrictions implied by both the baseline and the extended models. The results also suggest that the introduction of both durables and nontraded goods into the intertemporal model leads to a significant improvement over the baseline model with (traded) nondurables only—as judged by the models' ability to match certain properties of the annual data. Also, this improvement appears to arise from a combination of durables and nontraded goods, as durables or nontraded goods alone do not sufficiently refine the baseline model. Of course, it is possible to interpret the findings of the quarterly data as a vindication of the failure of the intertemporal model, despite taking account of the durables and nontraded goods. One potential weakness of the basic framework presented in Section 2 is that it ignores the desire to insure against low consumption streams, known as the precautionary motive. Households in this model behave according to the certainty equivalence principle whereby consumption smoothing constitutes their only saving motive. It is, however, possible to extend the current framework, in the spirit of Ghosh and Ostry (1997), to incorporate the precautionary motive, and account for the precautionary component of the current account. In order to assess the potential significance of this saving motive for the current account, I followed the methodology developed by Ghosh and Ostry (1997, pp. 129–130), and estimated the current account surplus that could be attributed to the precautionary motive. However, consistent with their estimates for Canada, I found no evidence for significant precautionary motive in the data.23 In testing the implications of a range of optimizing models of the current account, this paper used several present value tests in the spirit of Campbell (1987). One aspect of these tests is that they do not require the specification of a particular data generating process for net output. Given that the net output process is compatible with a variety of general equilibrium models, there is no need to be more specific about the production, investment and government expenditure processes, and it suffices to model consumption alone. As such, this framework may not be appropriate in other contexts. For instance, in order to study the current account response to different productivity shocks in the G-7, Glick and Rogoff (1995) and İşcan (2000) explicitly model both the demand and supply sides of the economy. Johnson, 1986 and Johnson, 1994 uses a similar model with a more elaborate government sector to assess the Ricardian equivalence for Canada. Put differently, the present value tests only focus on the broad implications of the intertemporal model. As a result, these tests do not provide any guidance concerning the potential weaknesses of the framework, such as nonseparabilities in utility between traded nondurables and other components of consumption, as well as leisure (Lewis, 1996) or time-varying real interest rate. However, the analysis of the Canadian current account has suggested that controlling for different aspects of consumption demand may improve the performance of any intertemporal model of the current account.