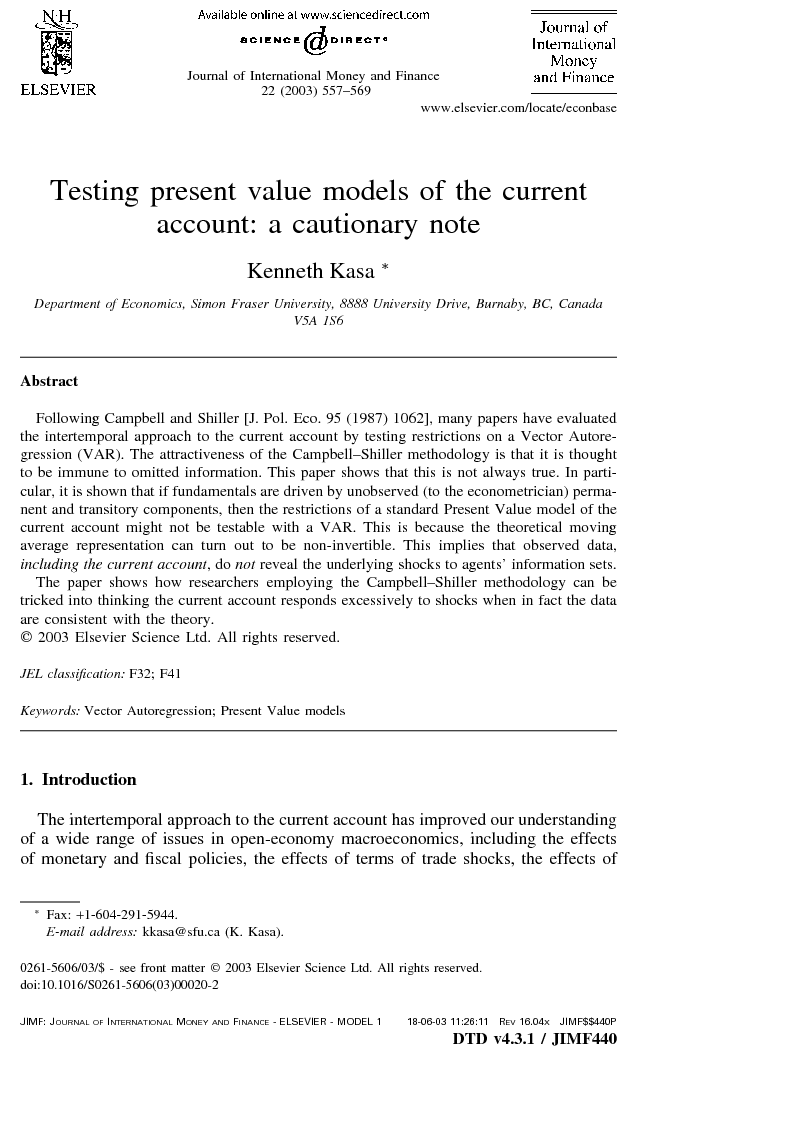 Following Campbell and Shiller [J. Pol. Eco. 95 (1987) 1062], many papers have evaluated the intertemporal approach to the current account by testing restrictions on a Vector Autoregression (VAR). The attractiveness of the Campbell–Shiller methodology is that it is thought to be immune to omitted information. This paper shows that this is not always true. In particular, it is shown that if fundamentals are driven by unobserved (to the econometrician) permanent and transitory components, then the restrictions of a standard Present Value model of the current account might not be testable with a VAR. This is because the theoretical moving average representation can turn out to be non-invertible. This implies that observed data, including the current account, do not reveal the underlying shocks to agents’ information sets. The paper shows how researchers employing the Campbell–Shiller methodology can be tricked into thinking the current account responds excessively to shocks when in fact the data are consistent with the theory.

The intertemporal approach to the current account has improved our understanding of a wide range of issues in open-economy macroeconomics, including the effects of monetary and fiscal policies, the effects of terms of trade shocks, the effects of trade policies, and the degree of international capital mobility.1 The basic idea behind the intertemporal approach is that a (small) country operating in a global capital market is like an individual operating in a domestic capital market. This analogy is extremely useful since it makes available all of the machinery that has been developed to study the Permanent Income Hypothesis of consumption. From this perspective, the key prediction of the intertemporal approach is that current accounts should respond to transitory shocks, but not to permanent shocks.2 Operationally, the predictions of the intertemporal approach rest on a number of auxiliary assumptions about asset market structure, demographics, and the decomposition of observed time series into various components. Most studies are quite explicit about their asset market and demographic assumptions. In keeping with the Permanent Income Hypothesis, it is usually assumed that international financial markets are incomplete, in the sense that bonds are tradeable but state-contingent claims are not. At the same time, domestic capital markets are usually assumed to be effectively complete, in the sense that a representative agent exists for each country. In addition, most studies assume these representative agents have infinite planning horizons, presumably due to an operative bequest motive. While the existing literature is usually clear about its asset market and demographic assumptions, it is noticeably less clear about the way decompositions are handled. In fact, one could argue that along this dimension there has been a bit of technological regress. Early empirical studies of the intertemporal approach focused on a single expenditure category, and examined whether the current account responds only to its transitory component. For example, Ahmed (1986) studied the response of Britain’s trade balance to government expenditures. Ahmed decomposed government expenditures into permanent and transitory components using a simple univariate linear de-trending procedure. He argued (persuasively) that for this particular case alternative decompositions are likely to produce similar results, since most of the variation in government expenditures were driven by the ‘natural experiments’ of wartime expenditure, which are widely perceived to be temporary. More recently, however, empirical testing of the intertemporal approach has shifted to a methodology pioneered by Campbell (1987) and Campbell and Shiller (1987). Campbell and Shiller evaluate the predictions of Present Value models by testing the implied cross-equation restrictions on a Vector Autoregression (VAR). The attractiveness of their methodology rests on its perceived robustness to omitted information. That is, under certain conditions their tests are valid even when the econometrician has access to less information than individual firms and households. Clearly, in most applications this kind of robustness is important. The key insight of Campbell and Shiller is to note that the observed decisions of agents can be sufficient statistics for any omitted information. Even if you as econometrician do not observe the underlying shocks to agents’ information sets, as long as you observe (ex post) the responses of agents to these shocks you might be able to invert the mapping between the two to infer what the underlying shocks were. Given estimates of the shocks, you can then proceed to test whether the observed responses are in accordance with the theory. The main contribution of this paper is to point out that the perceived robustness to omitted information is in general illusory. I argue that it rests on very special assumptions about the decomposition of fundamentals into permanent and transitory components. Implicitly, the Campbell–Shiller methodology is based on a Beveridge–Nelson (1981) approach to the decomposition. This approach is based on two identifying restrictions. First, the number of underlying shocks is assumed to be equal to the number of observed time series. This departs from an older tradition which views each time series as the sum of (orthogonal) unobserved components. Second, Beveridge and Nelson (1981)define the permanent component to be the infinite horizon forecast of the series. In the univariate case, these two restrictions combine to produce a decomposition with a pure random walk permanent component, with innovations that are perfectly correlated with innovations to the transitory component. While it might seem natural to assume that each series is driven by a single shock, from a theoretical perspective this assumption can be problematic. Rational Expectations models impose restrictions across the equations describing the economy’s exogenous forcing processes and the equations describing the decision rules of agents. Absent an explicit theory of planning or implementation errors, these decision rules are deterministic functions of the forcing processes. This produces a stochastic singularity in the joint process consisting of the exogenous variables and agents’ decision variables. One popular way to avoid a singularity is to appeal to the Unobserved Components idea, and assume that a single observed time series is the sum of distinct underlying components, each of which is observed by agents but not by the econometrician. As pointed out by Quah (1990) in the context of the Permanent Income Hypothesis, unobserved components have profound implications for tests of Present Value models. In particular, the Campbell–Shiller methodology is in general inapplicable, since the theoretical moving average representation can turn out to be non-invertible. This implies that agents’ decisions do not reveal the underlying shocks. The remainder of the paper is organized as follows. The next section outlines the standard Present Value model of the current account, and reviews the results of several recent empirical applications. Section 3 shows how unobserved components can produce a non-invertible moving average representation, and hence invalidate the Campbell–Shiller methodology. Section 4 provides a simple yet empirically plausible example in which the Present Value Model of the current account is true, but a researcher using the Campbell–Shiller approach is led to believe it is false. Section 5 concludes by offering suggestions on how to avoid the pitfalls highlighted by this paper.

The point made by this paper is not new. It is basically an open-economy analog of Quah (1990), which is itself based on the results in Hansen and Sargent (1991a). Its basic message, as in so many other cases, is that proper tests of the Present Value model of the current account depend sensitively on the nature of trend specification. If net output is trend stationary, or its permanent and transitory components are perfectly correlated so that a Beveridge–Nelson decomposition is appropriate, then the Campbell–Shiller methodology produces valid inferences about current account dynamics. On the other hand, if net output consists of orthogonal permanent and transitory components then, depending on the stochastic properties of the two components, the Campbell–Shiller methodology may produce erroneous conclusions about current account dynamics. While not new, this is an important message since prior work has often produced such apparently surprising results. The potential inapplicability of the Campbell–Shiller methodology raises the obvious question—What are you to do if you suspect the model’s moving average representation is indeed non-invertible? Does this mean the Present Value model of the current account is not testable? Fortunately, in addition to alerting researchers to the dangers of blindly assuming that VAR residuals represent innovations to agents’ information sets, Hansen and Sargent (1991a) also discuss ways around the problem. Perhaps the most straightforward is to simply deal with the moving average representation directly (see, e.g., Hansen and Sargent, 1991a, p. 95).