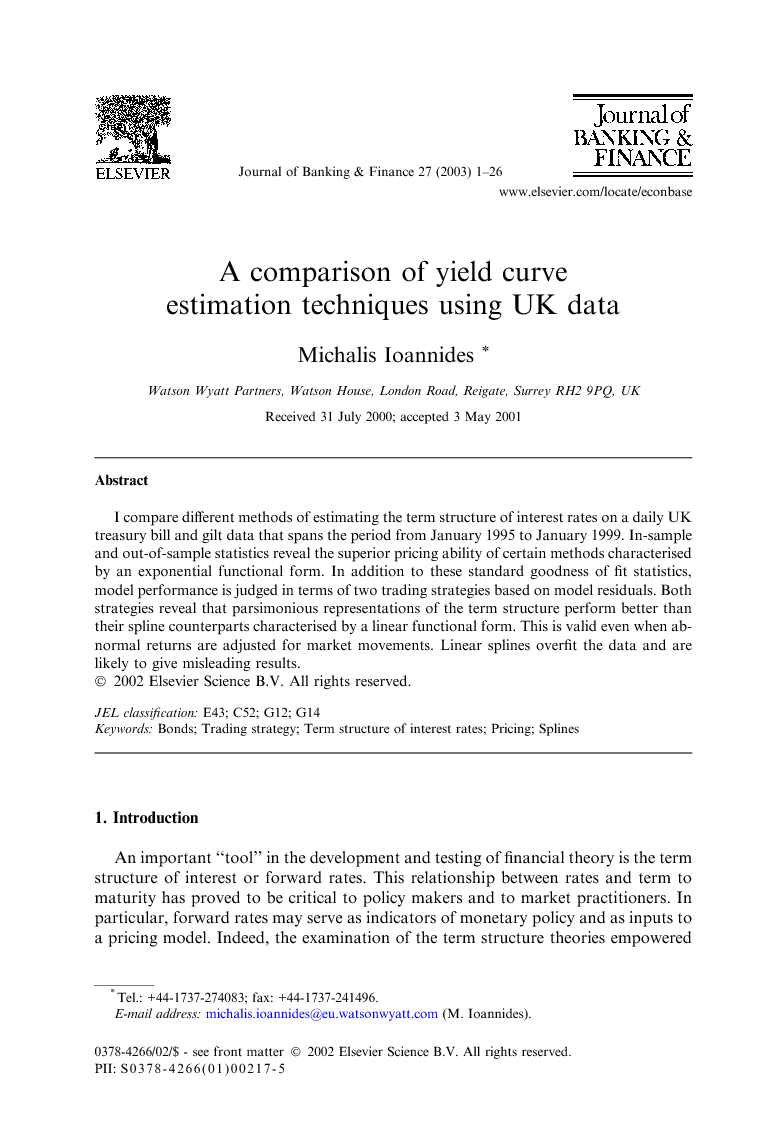 I compare different methods of estimating the term structure of interest rates on a daily UK treasury bill and gilt data that spans the period from January 1995 to January 1999. In-sample and out-of-sample statistics reveal the superior pricing ability of certain methods characterised by an exponential functional form. In addition to these standard goodness of fit statistics, model performance is judged in terms of two trading strategies based on model residuals. Both strategies reveal that parsimonious representations of the term structure perform better than their spline counterparts characterised by a linear functional form. This is valid even when abnormal returns are adjusted for market movements. Linear splines overfit the data and are likely to give misleading results.

I compare different methods of estimating the term structure of interest rates on daily UK Treasury bill and gilt data. I examine the Nelson and Siegel and Svensson functions, McCulloch's cubic spline, the linear, exponential and integrated exponential B-splines and the VRP method, a total of seven methods. The major conclusions stemming from in-sample and out-of-sample analysis of residuals suggest that the parsimonious specifications and VRP method perform better than the linear spline counterparts. In terms of the out-of-sample performance, the non-linear B-splines and the VRP function produced a lower mean absolute pricing error than the Nelson and Siegel specification, but these functions are second best to Svensson. This suggests that the specification of the functional form of the model is important for pricing. To verify this conclusion, I conduct two further tests to investigate genuine pricing errors. The application of the contrarian trading rule indicates that the best term structure estimation techniques are the parsimonious ones. Of the spline specifications, the integrated B-spline and the VRP function produce equally good results. However, the implementation of the filter rule shows for all functions with the exception of the linear and exponential B-splines that increasing our stake in a bond on the basis of the initial mispricing understates profits.