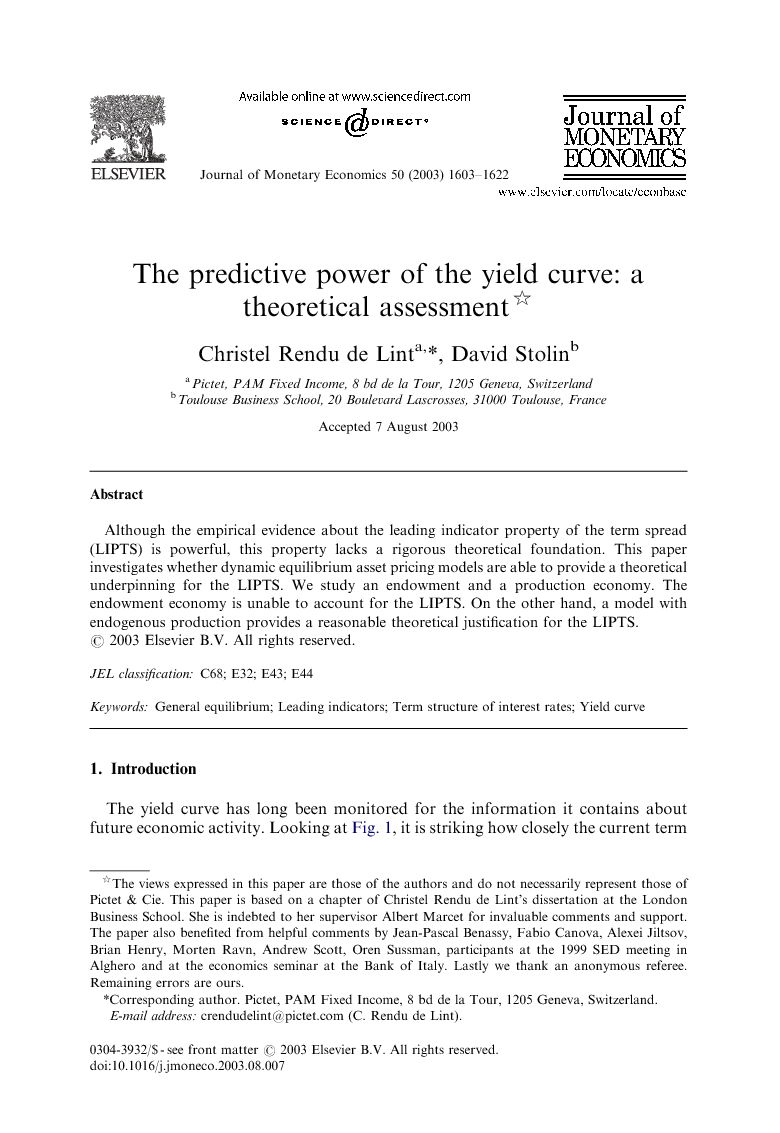 Although the empirical evidence about the leading indicator property of the term spread (LIPTS) is powerful, this property lacks a rigorous theoretical foundation. This paper investigates whether dynamic equilibrium asset pricing models are able to provide a theoretical underpinning for the LIPTS. We study an endowment and a production economy. The endowment economy is unable to account for the LIPTS. On the other hand, a model with endogenous production provides a reasonable theoretical justification for the LIPTS

The yield curve has long been monitored for the information it contains about future economic activity. Looking at Fig. 1, it is striking how closely the current term spread (the difference between the long and short interest rates, i.e. a measure of the slope of the yield curve) tracks movements in the future output and consumption growth rates. Since in both graphs at each point in time t, the spread is known but future growth rates are not, the term spread appears to contain predictive information about future economic activity. Based on this observation, numerous empirical papers studied and confirmed the leading indicator property of the term spread (henceforth LIPTS), showing that higher spreads precede periods of strong economic activity, while lower spreads announce periods of weak activity. In light of the strength of these results, the literature does not hesitate to characterize the spread's predictive ability as “impressive”, “robust” and “particularly well established”. 1 Yet, in contrast to this powerful empirical evidence stands the absence of rigorous theoretical justification for the LIPTS. Our paper is intended to bridge this gap.In an attempt to provide a theoretical underpinning for the empirically established LIPTS, this paper investigates whether dynamic equilibrium asset pricing models can explain the LIPTS. A stochastic endowment economy and a stochastic production economy are studied. Dynamic equilibrium asset pricing models appear to be a natural choice for explaining the joint behaviour of real macroeconomic variables (here consumption and output) and asset prices. Indeed, in dynamic equilibrium asset pricing models, asset prices are linked to the marginal utility of the agent, which itself depends on consumption. Under some conditions the endowment economy, in particular, implies a positive correlation between the m-period future consumption growth rate and the m-period spot interest rate. 2 This property, which derives from the first-order condition for the m-period bond price, makes the endowment economy a seemingly attractive candidate for explaining the LIPTS, leading some authors to conclude that it is consistent with the LIPTS. 3 Our paper questions this claim. The central findings of this paper are as follows. First, we show that, perhaps counter-intuitively, the endowment economy does not give rise to the LIPTS. Indeed, at time t an increase in the m-period spread is associated with a negative consumption growth rate over the same period. This is because in a simple endowment economy, where the endowment process has only first-order dynamics, the impact of a shock on consumption is the largest in the period it occurs and declines monotonically thereafter. As a consequence, short-term interest rates always respond more to a given shock than do long-term interest rates. Thus, after a positive endowment shock, the spread actually rises (since the short-term rate falls more than the long-term one), at odds with the expected decline in future consumption. To overcome this problem, we extend the endowment economy by introducing endogenous production. We show that term spreads generated in this economy become good predictors of future output growth, and of future consumption growth at long horizons. As opposed to the endowment model, in a production economy the dynamics of output and consumption can be quite different from each other, and this turns out to be crucial in explaining the LIPTS. In particular, in this economy the impulse response function for consumption only reaches its peak a few periods after a shock (and not in the first period as in the endowment economy), due to the fact that agents try to smooth out the shock's impact by substituting consumption intertemporally. It is precisely this ability of agents to freely substitute consumption over time which is at the root of the success of the production economy in explaining the LIPTS. Existing literature does not supply a formal theoretical model successfully justifying the LIPTS. Rouwenhorst (1995) tests for the LIPTS in a standard neoclassical growth model, modified to incorporate the endogenous choice of labour and leisure. He finds that the term spread does not forecast future real economic activity. Most papers documenting empirical evidence mention the possible role of monetary policy in explaining the LIPTS, but without formalising the argument.4 It is worth noting that our paper does not seek to explain the term structure of interest rates or to model term premia. A vast literature is already available on these issues (see e.g. Cox et al., 1985; Campbell, 1986; Backus et al., 1989; Donaldson et al., 1990; Longstaff and Schwartz, 1992; Labadie, 1994; den Haan, 1995). Nor does it study the co-movements of consumption growth and the real interest rate, as does Chapman (1997). Rather, it focuses on the predictive power of the term spread for future consumption and output growth. Donaldson et al. (1990), Labadie (1994) and Chapman (1997) all comment on how the term spread changes over the business cycle, but none studies the LIPTS in detail. The remainder of this paper is organized as follows. The next section reviews the empirical motivation for the paper. Section 3 presents results for the standard stochastic endowment economy, while Section 4 does so for the production economy. Section 5 takes a critical look at our modelling approach and discusses possible extensions. Section 6 concludes.

The aim of this paper was to provide a theoretical basis for the empirically supported leading indicator property of the term spread (LIPTS). Dynamic equilibrium asset pricing models appeared natural candidates to study the joint behaviour of real macroeconomic variables (consumption and output) and asset prices. We studied two models, a stochastic endowment economy and a production economy. The first contribution of this paper is to show that not all dynamic equilibrium asset pricing models can explain the LIPTS. Contrary to what is sometimes assumed and perhaps counter-intuitively, an endowment economy does not generate the LIPTS. This is because after any shock, short-term interest rates always react more than long-term rates, resulting in a negative correlation between the term spread and future consumption growth rates. The second contribution is to show that a simple production economy, on the other hand, goes a long way in explaining the LIPTS. This positive result permits greater understanding of what may be driving the LIPTS in actuality. Indeed, one mechanism appears to be crucial: agents must be able to substitute consumption intertemporally in reaction to productivity changes.