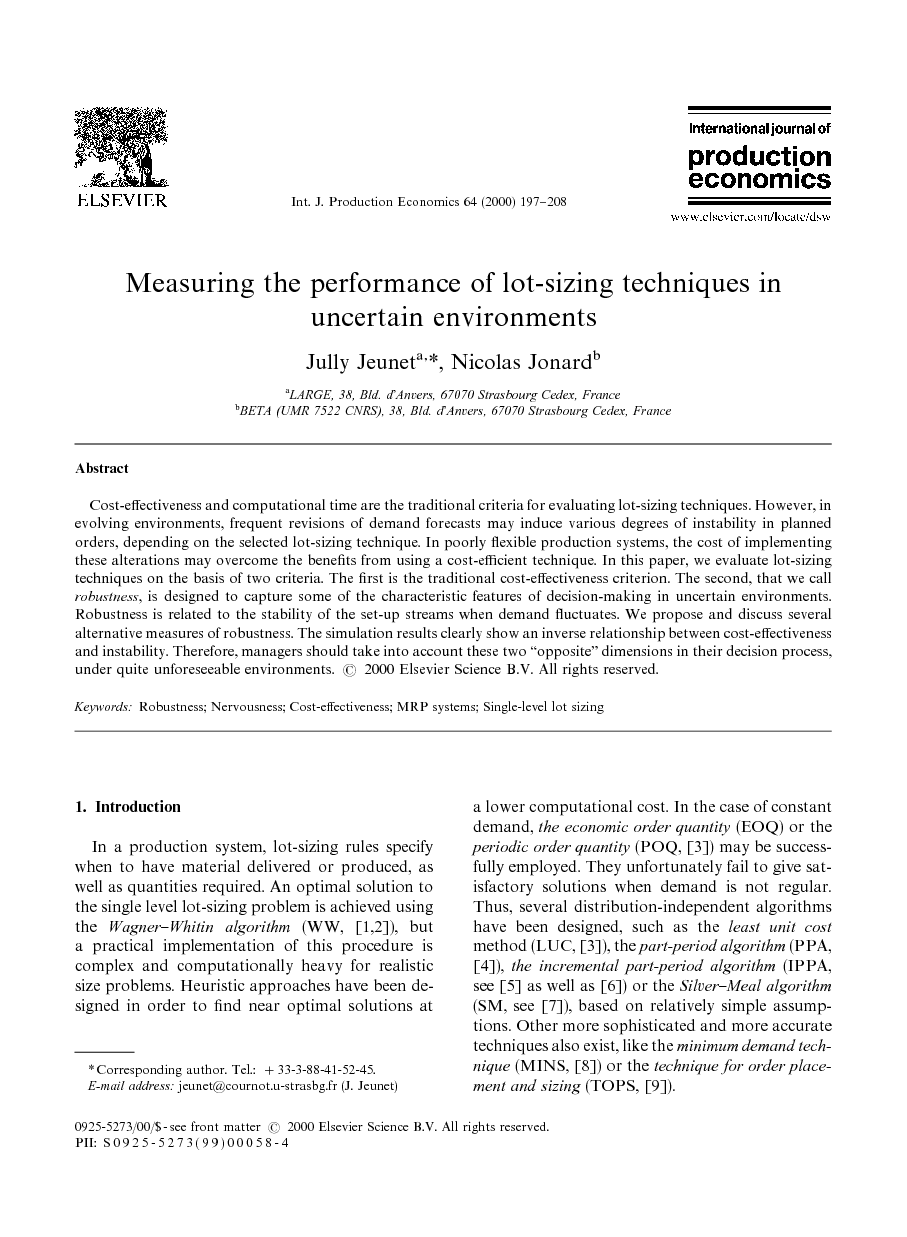 Cost-effectiveness and computational time are the traditional criteria for evaluating lot-sizing techniques. However, in evolving environments, frequent revisions of demand forecasts may induce various degrees of instability in planned orders, depending on the selected lot-sizing technique. In poorly flexible production systems, the cost of implementing these alterations may overcome the benefits from using a cost-efficient technique. In this paper, we evaluate lot-sizing techniques on the basis of two criteria. The first is the traditional cost-effectiveness criterion. The second, that we call robustness, is designed to capture some of the characteristic features of decision-making in uncertain environments. Robustness is related to the stability of the set-up streams when demand fluctuates. We propose and discuss several alternative measures of robustness. The simulation results clearly show an inverse relationship between cost-effectiveness and instability. Therefore, managers should take into account these two “opposite” dimensions in their decision process, under quite unforeseeable environments.

In a production system, lot-sizing rules specify when to have material delivered or produced, as well as quantities required. An optimal solution to the single level lot-sizing problem is achieved using the Wagner–Whitin algorithm (WW, [1] and [2]), but a practical implementation of this procedure is complex and computationally heavy for realistic size problems. Heuristic approaches have been designed in order to find near optimal solutions at a lower computational cost. In the case of constant demand, the economic order quantity (EOQ) or the periodic order quantity (POQ, [3]) may be successfully employed. They unfortunately fail to give satisfactory solutions when demand is not regular. Thus, several distribution-independent algorithms have been designed, such as the least unit cost method (LUC, [3]), the part-period algorithm (PPA, [4]), the incremental part-period algorithm (IPPA, see [5] as well as [6]) or the Silver–Meal algorithm (SM, see [7]), based on relatively simple assumptions. Other more sophisticated and more accurate techniques also exist, like the minimum demand technique (MINS, [8]) or the technique for order placement and sizing (TOPS, [9]). An appraisal of lot-sizing techniques usually rests upon two traditional criteria, namely cost-effectiveness and computational time (see [10] or [11]). These criteria, despite their usefulness, ignore some practical aspects of the way lot-sizing decisions are implemented, especially when demand forecasts are continuously revised over time. Sure enough, in such a context, lot-sizing techniques do not exhibit the same degree of instability in planned orders. Therefore, we propose another evaluation criterion of lot-sizing techniques. We call robustness of a lot-sizing model the degree of stability in planned orders provided by the lot-sizing model in response to changes in demand estimates. Depending on the flexibility of the production system, the cost of frequently adjusting planned orders may exceed the benefit from following the prescribed changes. Hence, the evaluation of a technique can be made from a global point of view. In a system with low flexibility, implementing the change in planned orders required by a particular lot-sizing method can be so costly that the previous schedule – upon which personnel scheduling or machine loading may have already been based – is finally maintained. Therefore, when the cost of scheduled orders adjustment is high (i.e. when flexibility is low), using a robust technique can be considered as a proper choice. Conversely, in a production system characterized by a high degree of flexibility, it seems a priori efficient to follow the prescribed schedules. In this paper, we examine how demand variability affects the production schedules generated by nine lot-sizing methods for single-level assembly. We compare both the cost-effectiveness and robustness of these methods. Several possible dimensions of robustness are discussed and charts of lot-sizing techniques corresponding to these dimensions are provided. Whatever the considered dimension is, the existence of a negative correlation between cost-effectiveness (linked with algorithmic complexity) and robustness is highlighted. The paper is organized as follows. Section 2 begins with an overview of the related research. We then focus on the concept of robustness, and discuss its managerial implications as well as its different measures. In Section 3, we present an experimental framework designed to grasp some basic intuitions concerning robustness and its importance in the problem of single level lot-sizing decisions. The results of numerical simulations are presented and analyzed in Section 4.

In this text, we have analyzed the core managerial decision of selecting a proper lot-sizing rule in uncertain environments. Rather than proposing strategies to combat MPS instability, we have suggested that the appraisal of lot-sizing techniques should take into account their robustness, hence reflecting the flexibility of the production system itself. We have proposed several simple measures specifically designed to capture various aspects of robustness. The behavior of nine lot-sizing rules has been examined and all our measures clearly show a negative correlation between robustness and cost efficiency. These findings are summarized in Table 3. It should be noted that these results emerge under a wide range of demand patterns described by a stationary Markov process. In environments characterized by a strong demand variability, the decision maker faces a dilemma. Only when the production system is highly flexible would we recommend optimal methods, since no large cost is incurred from frequently reorganizing delivery dates. On the other hand, in a low-flexible production system, it may not be optimal to systematically implement the changes suggested by lot-sizing techniques, as the corresponding benefits may not compensate the adjustment costs. Actually, in a low-flexible production system, simply selecting a robust lot-sizing technique would probably be more efficient than trying to implement complex strategies for reducing MPS instability. As a final remark, let us emphasize that PPA and SM constitute good trade-offs between cost-effectiveness and robustness and that both are familiar to manufacturing MRP users, contrary to TOPS or MINS that are more recent. Hence, these techniques could be successfully employed in low-flexible production systems. Let us also point out that EOQ fails to be robust, contrary to what is often claimed about this technique (see [12]).