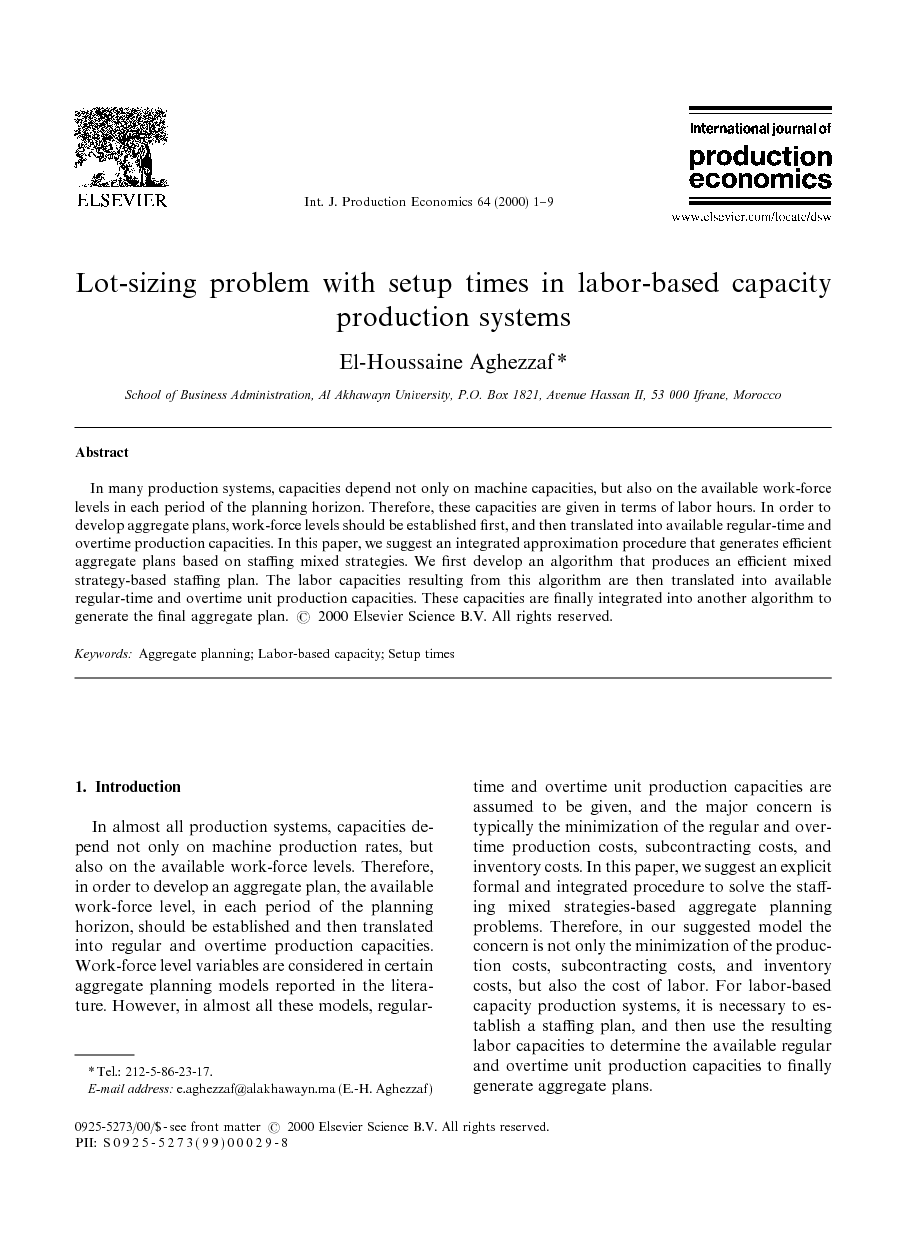 In many production systems, capacities depend not only on machine capacities, but also on the available work-force levels in each period of the planning horizon. Therefore, these capacities are given in terms of labor hours. In order to develop aggregate plans, work-force levels should be established first, and then translated into available regular-time and overtime production capacities. In this paper, we suggest an integrated approximation procedure that generates efficient aggregate plans based on staffing mixed strategies. We first develop an algorithm that produces an efficient mixed strategy-based staffing plan. The labor capacities resulting from this algorithm are then translated into available regular-time and overtime unit production capacities. These capacities are finally integrated into another algorithm to generate the final aggregate plan.

In almost all production systems, capacities depend not only on machine production rates, but also on the available work-force levels. Therefore, in order to develop an aggregate plan, the available work-force level, in each period of the planning horizon, should be established and then translated into regular and overtime production capacities. Work-force level variables are considered in certain aggregate planning models reported in the literature. However, in almost all these models, regular-time and overtime unit production capacities are assumed to be given, and the major concern is typically the minimization of the regular and overtime production costs, subcontracting costs, and inventory costs. In this paper, we suggest an explicit formal and integrated procedure to solve the staffing mixed strategies-based aggregate planning problems. Therefore, in our suggested model the concern is not only the minimization of the production costs, subcontracting costs, and inventory costs, but also the cost of labor. For labor-based capacity production systems, it is necessary to establish a staffing plan, and then use the resulting labor capacities to determine the available regular and overtime unit production capacities to finally generate aggregate plans. Several authors have studied and developed various solution techniques for variants of aggregate planning problems. Holt et al. [1] have used linear decision rules, Taubert [2] has used the search decision rule for some simple aggregate planning models. These models are very basic in the sense that they take into consideration neither setup costs nor setup times, which are among aspects that complicate the aggregate planning problems. Other authors have tackled more complex models which take into account either setup costs or setup times, and have developed solution techniques, among others, Dixon and Silver [3], Dzelinsky and Gomory [4], Lasdon and Terjung [5], Bahl [6], Anderson and Cheah [7], Barany et al. [8], Eppen and Martin [9], Maes et al. [10], Millar and Yang [11], Aghezzaf and Artiba [12]. Here, we propose an approximation procedure to solve the staffing mixed strategies based aggregate planning problems, based on Lagrangean decomposition. The main distinguishing features of our decomposition are two: (i) unlike the usual Lagrangean relaxations which remove the complicating constraints, and hence a part of the constraint set, our Lagrangean decomposition retains all of the original set of constraints; (ii) unlike almost all Lagrangean decomposition algorithms in which subgradient procedures are used to compute Lagrangean multipliers, in our Lagrangean decomposition the Lagrangean multipliers are obtained through shadow prices corresponding to some constraints of the model.

In almost all aggregate planning models presented so far in the literature, capacities are considered to be known in advance and are included in the aggregate planning models as part of the model parameters. In this paper we have tackled the aggregate planning problems in which available capacities are the result of the staffing strategy implemented. We have developed an integrated approximation method that establishes the staffing strategy in the first phase, providing the available labor capacity in each period. These capacities are then translated into regular-time and overtime unit production capacities. We then proceed to the second phase in which these capacities are taken as parameters and the final aggregate production plan is established. In both phases the problem and subproblems are solved through the solution of a collection of linear network flow problems. Our computational tests have shown that the proposed heuristic is efficient for those problems in which the setup times are of low or moderate variability, since the solutions proposed are quite close to the optimal solution. The drawback is that at each iteration the solution of a linear network flow problem (transshipment problem) must be achieved. Future research directions to reduce computation time are to develop an efficient primal–dual algorithm for the solution of the network flow problems. Also, although our procedure proves to converge for our test problems, it is important that the convergence of the procedure be proved formally. Finally, it is important to develop other measures for the opportunity of canceling production of an item in a period.