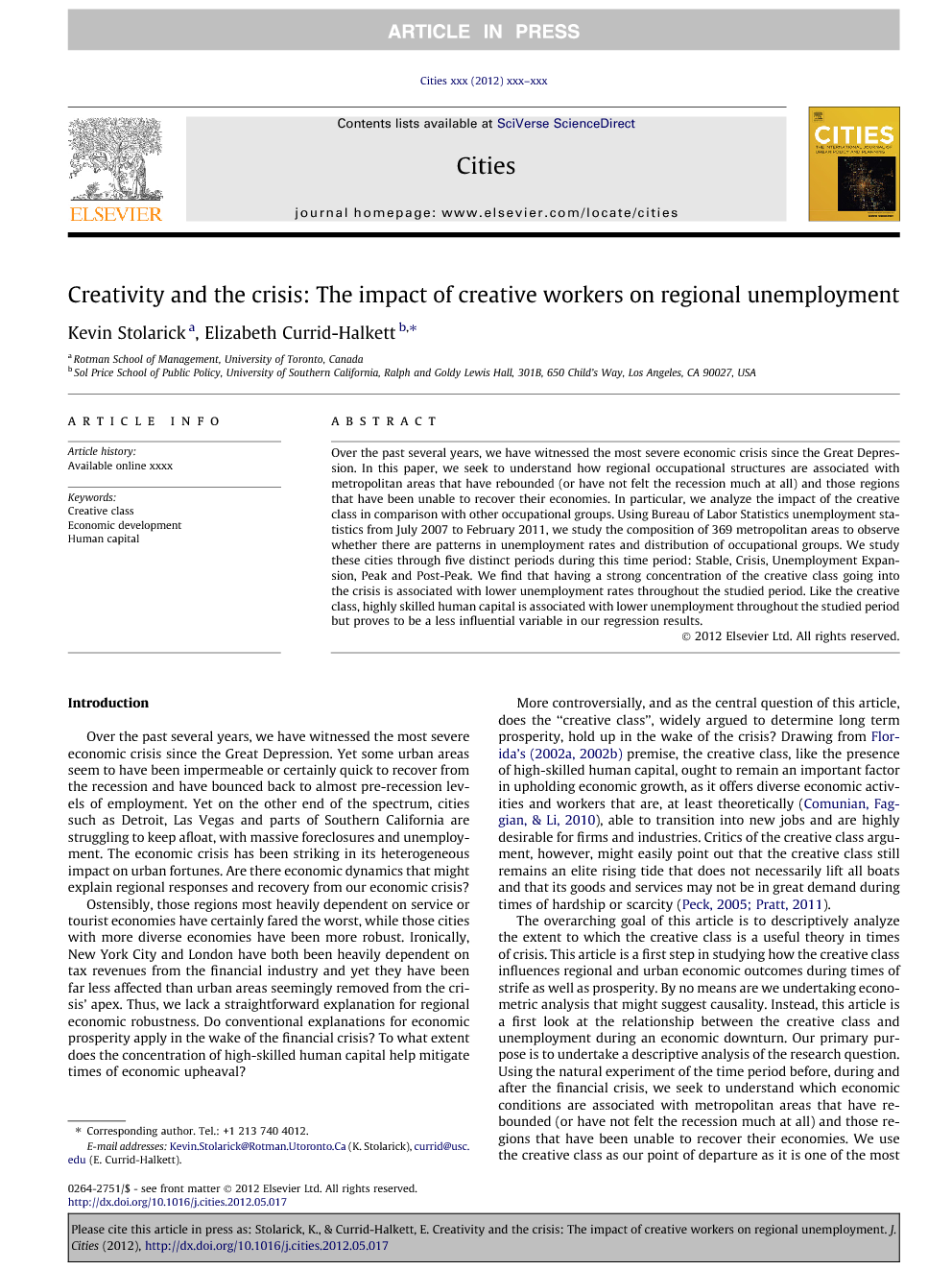 Over the past several years, we have witnessed the most severe economic crisis since the Great Depression. In this paper, we seek to understand how regional occupational structures are associated with metropolitan areas that have rebounded (or have not felt the recession much at all) and those regions that have been unable to recover their economies. In particular, we analyze the impact of the creative class in comparison with other occupational groups. Using Bureau of Labor Statistics unemployment statistics from July 2007 to February 2011, we study the composition of 369 metropolitan areas to observe whether there are patterns in unemployment rates and distribution of occupational groups. We study these cities through five distinct periods during this time period: Stable, Crisis, Unemployment Expansion, Peak and Post-Peak. We find that having a strong concentration of the creative class going into the crisis is associated with lower unemployment rates throughout the studied period. Like the creative class, highly skilled human capital is associated with lower unemployment throughout the studied period but proves to be a less influential variable in our regression results.

This article seeks to analyze the significance of the creative class on the economy during a time of crisis. While we establish a correlation between the creative class and economic robustness we are by no means undertaking an econometric analysis that might pinpoint causality. Our purpose is to take the first step to understanding the creative class in a wider economic context. While previous research has looked at its impact on regional and urban economies under normal conditions, we sought to understand how the creative class performs during and in the aftermath of the crisis. We were also interested in the extent to which these findings were comparable to other economic sectors along with the human capital measure. We find that, with regard to influence on unemployment, the creative class outperforms human capital and all other sectors throughout the studied period with one exception. In smaller places (under 100,000) the working class is more important than the creative class. In other words, lower populated places that were strong in trades and manufacturing weathered well during the stable period and the influence of the working class continued to negatively influence (i.e. reduce) unemployment throughout the crisis, expansion, peak and post-peak periods. While the working class sector is not the focus of this article, we think that the result deserves some discussion. First of all, working class jobs are more stable while the creative class has a more rotating labor pool (Florida, 2002a). Empirically, Stolarick (2011) finds on average 1 in 9 creative class workers changes jobs annually versus 1 in 30 working class employees. We speculate that the nature of industries that fall under the working class group may also delay rises in unemployment. Places with more trade workers and manufacturing were less likely to stop production abruptly because durable goods manufacturing take some time to slow down. Further, manufacturing processes (orders, keeping machines running, inventory, etc.) can be costly to stop. Fear of stagnation and union penalties for throttling back may mean (at least at the outset) that stopping and starting can be more expensive than maintaining status quo, thus reducing production might be a more circumspect decision. The results show that the service sector is associated with higher unemployment earlier, which we suspect reflects the type of jobs and products. Services are often a part of discretionary spending, thus more sensitive. Put another way, during a financial crisis, spending on entertainment and restaurants can stop immediately. Our findings raise as many questions as they answer. The biggest questions deal with the possibility that the results may be driven because of the underlying nature of the Floridian occupational taxonomy that has been used. The creative class results are striking and interesting but what dynamics are underpinning these results? Are more specific occupational groups better at weathering the crisis, and is the creative class fully or partially composed of those groups? Does city size and position within the hierarchy play a differential role (as found here) when more specific occupations are considered? In our future research, we are studying this topic in depth, considering a more “deconstructed” creative class (broken into occupational subgroups) to further investigate these relationships and refine these results. Overall, our results suggest that the creative class is an important positive influence during the financial crisis. We consider the explanations that may underpin this result. Creative jobs are inherently more diverse and empirically we know that diversity is greater with a larger creative share (working and service sectors are more homogeneous) (Currid-Halkett & Stolarick, 2011). By extension, increasing the share of the creative class takes away from service and implicitly increases occupational diversity. This shift in proportion increases economic fortitude should particular industries or occupations become vulnerable. Fundamentally, creative jobs are robust by virtue of what they produce – ideas and a hybrid of innovation, consumption and production (Florida, 2002a, Pratt, 2004 and Pratt, 2008; Scott, 2000). While scholars have long made this observation more generally about creativity and economic vitality, our results suggest that the trend continues even during times of economic hardship. In this respect, creativity is an intrinsic part of both maintaining and upholding economies, big and small and during both stable and these uncertain times.