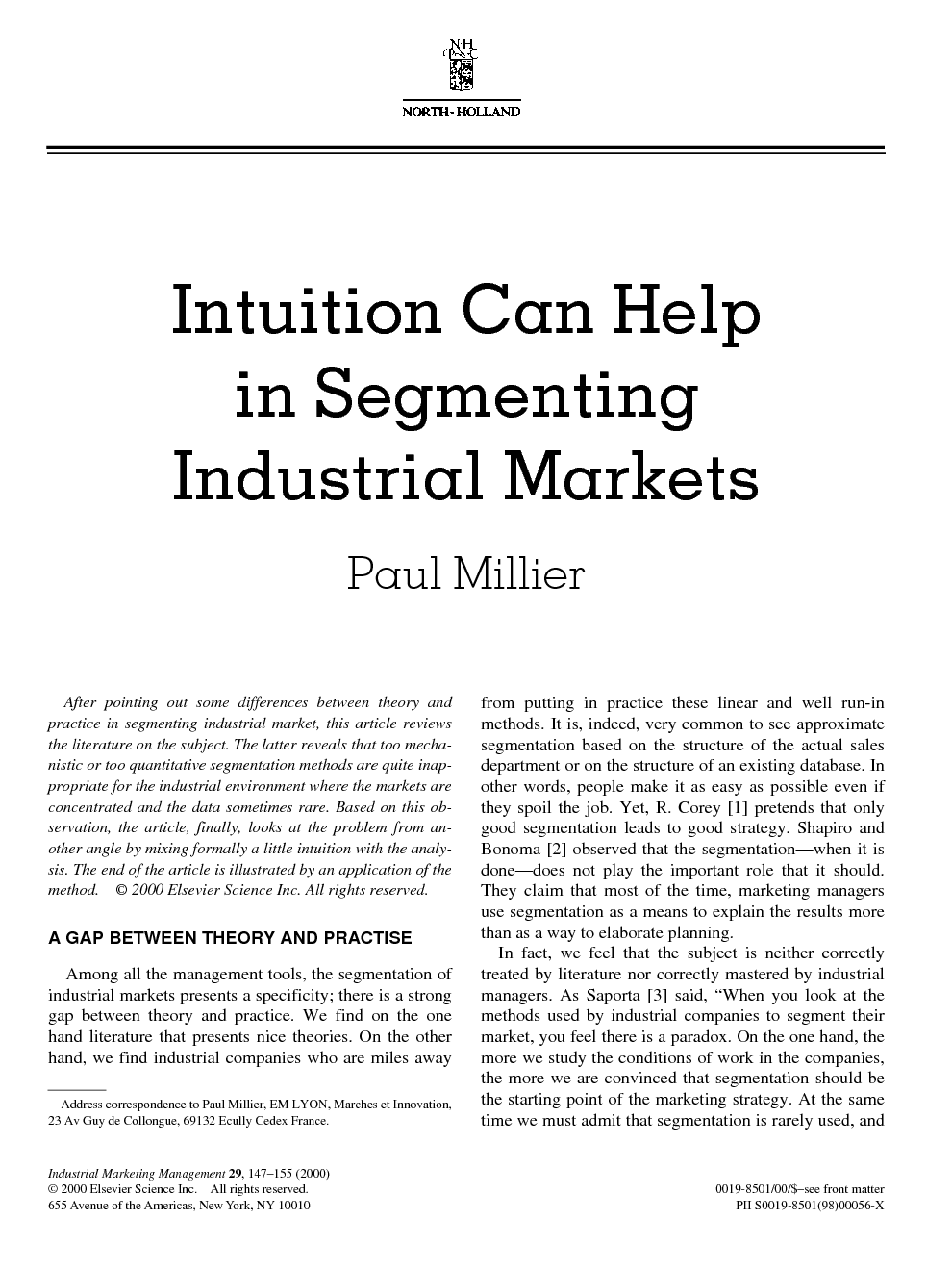 After pointing out some differences between theory and practice in segmenting industrial market, this article reviews the literature on the subject. The latter reveals that too mechanistic or too quantitative segmentation methods are quite inappropriate for the industrial environment where the markets are concentrated and the data sometimes rare. Based on this observation, the article, finally, looks at the problem from another angle by mixing formally a little intuition with the analysis. The end of the article is illustrated by an application of the method.

Among all the management tools, the segmentation of industrial markets presents a specificity; there is a strong gap between theory and practice. We find on the one hand literature that presents nice theories. On the other hand, we find industrial companies who are miles away from putting in practice these linear and well run-in methods. It is, indeed, very common to see approximate segmentation based on the structure of the actual sales department or on the structure of an existing database. In other words, people make it as easy as possible even if they spoil the job. Yet, R. Corey [1] pretends that only good segmentation leads to good strategy. Shapiro and Bonoma [2] observed that the segmentation—when it is done—does not play the important role that it should. They claim that most of the time, marketing managers use segmentation as a means to explain the results more than as a way to elaborate planning. In fact, we feel that the subject is neither correctly treated by literature nor correctly mastered by industrial managers. As Saporta [3] said, “When you look at the methods used by industrial companies to segment their market, you feel there is a paradox. On the one hand, the more we study the conditions of work in the companies, the more we are convinced that segmentation should be the starting point of the marketing strategy. At the same time we must admit that segmentation is rarely used, and sometimes badly understood by most companies. It is clear that many improvements can be made in this field, that could undoubtedly help companies improve their performance.” Saporta said so for commercialized products. But the observation of more than a hundred radical innovations reinforces Saporta's analysis. The firms do not know how to deal with segmentation when the market does not yet exist. The universe does not exist, and the possible criteria are so many that combining them leads to many more segments than a man can manage. In these conditions, systematic and rigorous methods seem to be a little apart from the industrial reality. We are bound to take into account more empirical data, more experience and even a little intuition to deal with the segmentation of industrial markets. To mix these so different points of view, this article proposes first to examine the segmentation literature to show its limits. We shall then present an alternative method starting from the actual industrial practices to avoid the risk of rejection. The aim of this method is not too ambitious. We do not want industrial managers to become “premium segmenters”. We just want to help them improve their empirical practices.

In conclusion, a first draft of segmentation can be very quickly got by intuition. This draft is far from being perfect, but it is not a problem as long as we know that it is just a starting point. The aim of the operation is just to get some first classification poles to begin the rationalization process. In the case of the above segmentation, the logical test matrixes and the research of the segmentation criteria played this role of rationalization [12]. If we look carefully at what we have done, we have made no more than putting in practice some principles used in mathematical methods such as the “heap method” or the “dynamic clouds method”. In these two methods, some grouping poles are first chosen (randomly or not), and some mathematical tests are done to maximize intraclass homogeneity and interclass heterogeneity. The first unfinished classification is progressively improved until we reach an approached result that can always be endlessly modified. The segmentation is adjusted to the market step by step, it is compared to the market, and it is validated by this comparison at the same time as it validates the market. In these conditions, the segmentation can be considered as an “ideal type” in the meaning of Max Weber as quoted by Bourdieu, Chamboredom and Passeron [13]. He says that the ideal type is a guide to build hypothesis, a coherent fiction to which the situation or the action is compared. It is a construction that allows a comparison to the reality. The reality can be measured by the ideal type because the ideal type is measured against the reality as adjustments of both the ideal type, and the reality lead to an ever greater similarity between the two. But, even partly invalid the segmentation is useful because, at least, it exists. Now, it is always much easier to criticize and improve something than to build for the first time. In fact the reason of being of the segmentation is to build a first and original representation of the market. So, the segmentation becomes a heuristic tool, a tool to discover the reality. It rationalizes the market and reminds us that “the reality is not rational but only rationalizable”. The practice of this way of segmenting the market proves that rationalization gives a strong power of conviction to the segmentation because it relies on a construction, more logical more justified and more communicable than the only intuition. But this benefit is small compared to what the exercise brings to the one who does the job and appropriates progressively the representation that he produces. The process of segmentation forces us to write, to project on the paper the ideas turning endlessly in our mind. Now, as long as the ideas turn in mind it is impossible to know if they are valid, complete, and justified. As soon as we draw the ideas on the paper we get a jigsaw puzzle effect. We just begin to see the image when we start putting the parts together. Furthermore, the only way to know if we have all the parts, or if some are missing, is to build the puzzle. In this latter case, we have to search for the missing pieces of information, but the job is very focused on what is missing, hence very efficient.