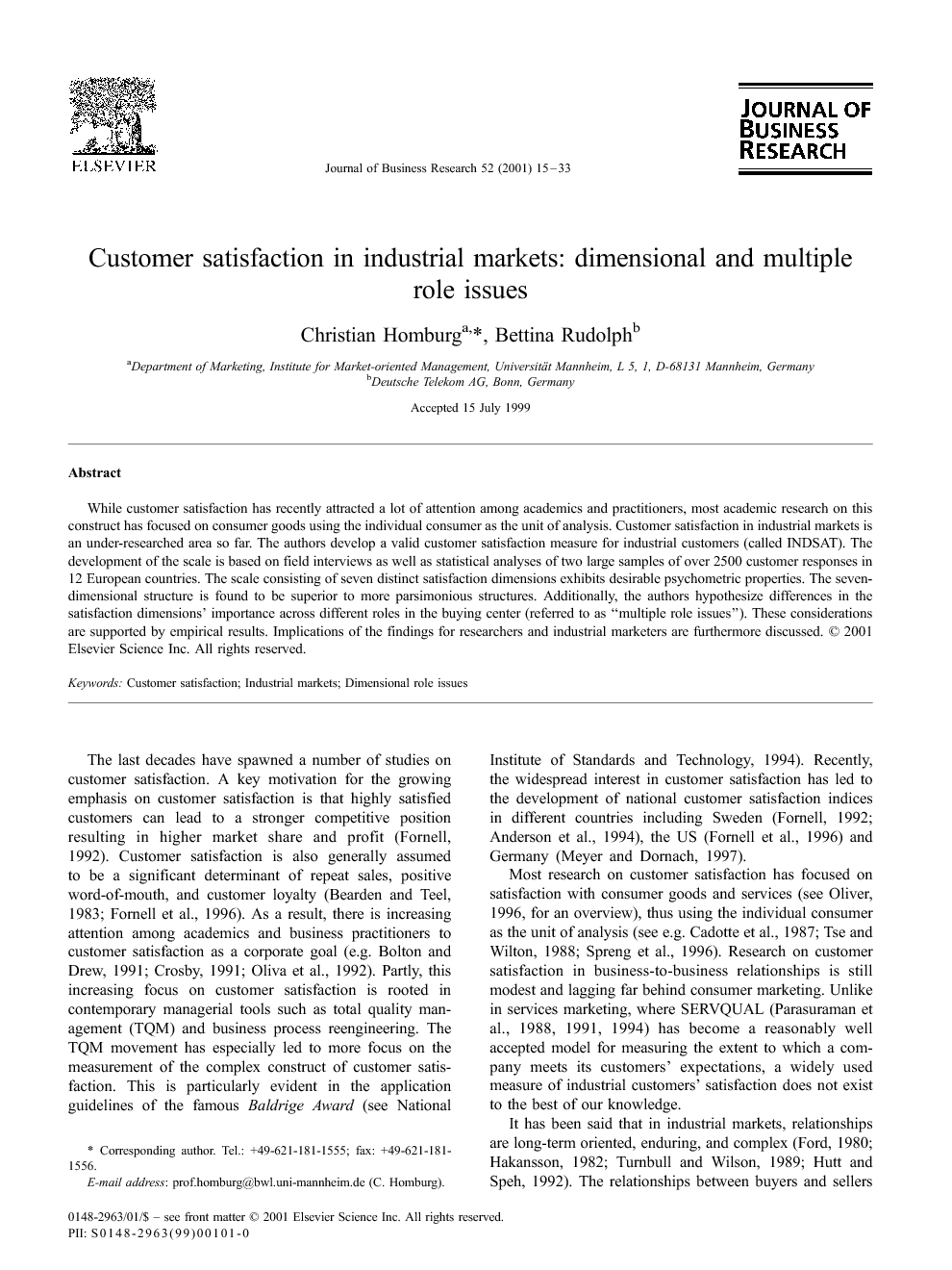 While customer satisfaction has recently attracted a lot of attention among academics and practitioners, most academic research on this construct has focused on consumer goods using the individual consumer as the unit of analysis. Customer satisfaction in industrial markets is an under-researched area so far. The authors develop a valid customer satisfaction measure for industrial customers (called INDSAT). The development of the scale is based on field interviews as well as statistical analyses of two large samples of over 2500 customer responses in 12 European countries. The scale consisting of seven distinct satisfaction dimensions exhibits desirable psychometric properties. The seven-dimensional structure is found to be superior to more parsimonious structures. Additionally, the authors hypothesize differences in the satisfaction dimensions' importance across different roles in the buying center (referred to as “multiple role issues”). These considerations are supported by empirical results. Implications of the findings for researchers and industrial marketers are furthermore discussed.

A primary challenge of this study was to propose and evaluate a scale called INDSAT for measuring customer satisfaction in industrial markets. It represents one of the few attempts to outline a methodology to better understand customer satisfaction from the perspective of the industrial buyer. The study has the potential to make theoretical, methodological, and managerial contributions. 5.1. Theoretical discussion Our study has several implications for marketing theory. Among other things, it highlights the complexity of the construct of industrial customer satisfaction. This is evident from the support we obtained for Proposition 1. Models with a lower level of complexity (i.e. with a lower number of factors) were found to be inferior to the seven-dimensional conceptualization. One of the more generalizable approaches to measuring satisfaction in the consumer goods sector is the “index of consumer sentiment toward marketing” developed by Gaski and Etzel (1985). It suggests four factors related to product, advertising, price and retailing/selling issues, respectively. Compared to the INDSAT scale, this model is much less complex since it contains four as opposed to seven components. The number of components in a system is typically considered to be an indicator of the system's complexity (Duncan, 1972). As an aside, it is worth noting that our conceptualization also contains more dimensions than the SERVQUAL scale (Parasuraman et al., 1988) which has been developed for evaluating satisfaction with services. If we look at the origins of the higher level of complexity of industrial customer satisfaction, the first thing to mention is the product. While product characteristics are summarized in a single dimension (as it is the case in the model suggested by Gaski and Etzel, 1985), providing written product-related information (technical documentation, operating instructions) seems to be so important that it constitutes a dimension on its own. This observation can be attributed to the higher level of complexity of industrial products (e.g. Hutt and Speh, 1992, p. 12). This complexity leads to a high importance of accompanying technical services (Homburg and Garbe, 1999), which constitute another dimension of industrial customer satisfaction. Additionally, our scale reflects that communication between buyer and seller is more complex as has been suggested by Hakansson (1982). More specifically, communication does not only take place with salespeople but also with the supplier's internal staff (INDSAT factors two and six). In summary, our findings show that the high complexity of industrial marketing settings leads to a highly complex construct of customer satisfaction, which clearly differs from conceptualizations of customer satisfaction in the consumer goods sector. Against this background, the use of single item measures such as “How satisfied are you with the relationship in general?” is not adequate. Rather, future attempts to measure industrial customers' satisfaction should use the approaches developed in this paper. Obviously, in situations where customer satisfaction is but one of several other constructs under investigation, employing a 29-item-scale is not a viable alternative. In such situations, summarizing each of the seven dimensions may be a reasonable compromise between the use of the full scale and the use of primitive single item measures (see, e.g. Parasuraman et al., 1988, who proposed this approach for the application of SERVQUAL). In other situations, researchers might be interested in analyzing not the full range of industrial customer satisfaction, but only a limited domain of it. In such situations, the scales developed for the different dimensions of customer satisfaction may be used. For example, when studying the effectiveness of different complaint handling techniques, our scale for measuring customer satisfaction with complaint handling may be used as an outcome measure. The analysis described in this paper may also contribute to an improved understanding of industrial marketing. Our study especially reveals that the way a supplier handles specific customer-related processes as well as the salespeople's interaction with customers are key factors for achieving customer satisfaction in industrial markets. These issues should experience more attention in industrial marketing theory than in the past. Also, textbooks in industrial marketing typically focus on the classical marketing mix instruments (the four Ps) and neglect such issues as order handling and processing and complaint handling. Additionally, our study may contribute to an improved understanding of industrial buying behavior. Our analyses essentially confirm Proposition 3 and thus clearly reveal that different functional groups in the buying center emphasize different criteria when assessing a supplier's performance. While this has been stated in the literature before, empirical evidence on this important issue has been scarce so far.