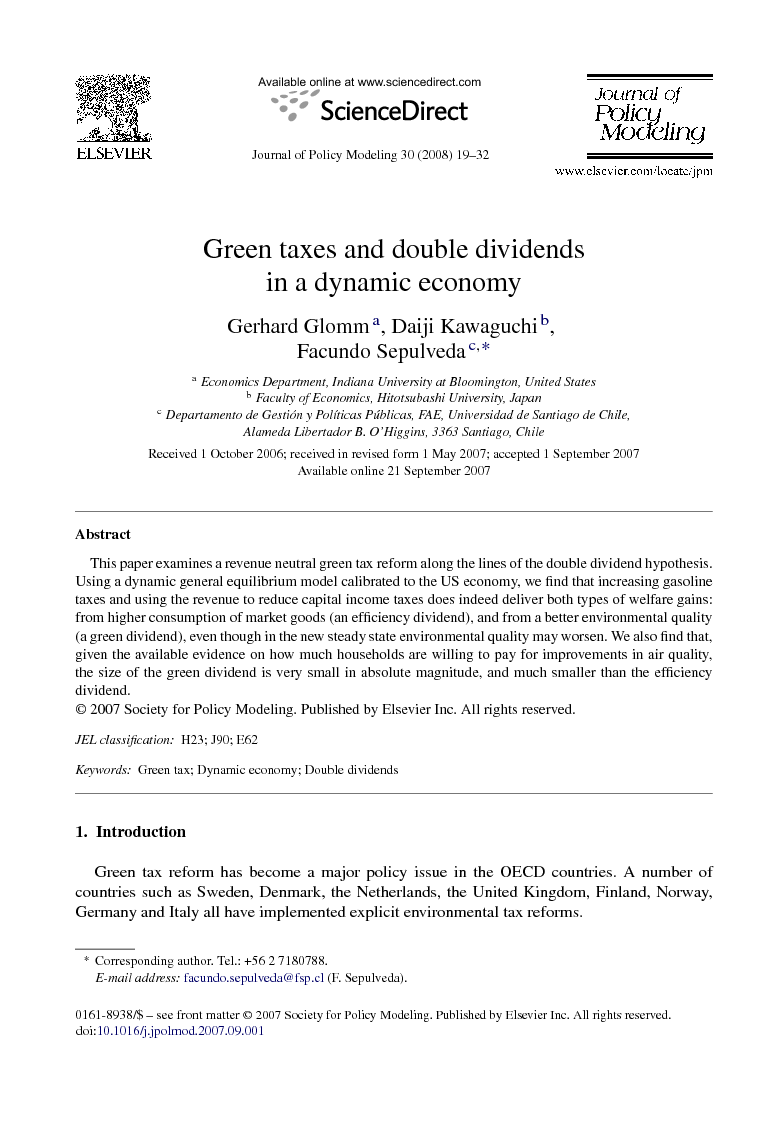 This paper examines a revenue neutral green tax reform along the lines of the double dividend hypothesis. Using a dynamic general equilibrium model calibrated to the US economy, we find that increasing gasoline taxes and using the revenue to reduce capital income taxes does indeed deliver both types of welfare gains: from higher consumption of market goods (an efficiency dividend), and from a better environmental quality (a green dividend), even though in the new steady state environmental quality may worsen. We also find that, given the available evidence on how much households are willing to pay for improvements in air quality, the size of the green dividend is very small in absolute magnitude, and much smaller than the efficiency dividend.

In our model, raising a green tax does indeed allow a pre-existing tax to be decreased, here a tax on capital income. Cutting the highly distortionary capital taxes does reduce the deadweight loss from the tax system given current tax levels, so green tax reform does yield one dividend. If fuel is an input in the production of capital, however, increasing the capital stock raises the demand for fuel which may offset any decline in fuel use due to higher fuel taxes. While this offsetting effect is important in steady state comparisons, it is dwarfed by substitution effects that decrease the consumption of fuel and thus deliver a better environmental quality for a very long period along the transition path. This result certainly depends on the elasticity of substitution in production between capital and energy. If this elasticity of production were to be substantially smaller than the value we use in our model, this result may be overturned. For the estimates available for the US economy, however, the green dividend is indeed achieved. It is worth noting that given the low value that households show for the quality of the environment, the size of this welfare gain (the green dividend) is very small in absolute terms, and much smaller than the efficiency dividend. Our results suggest that the green dividend may not be after all a strong argument in favor of the implementation of green tax policy reform. Our analysis does suggest however that policymakers who are contemplating a green tax reform should give serious consideration to how the extra revenue should be recycled. In our paper the largest pre existing tax distortion is a tax on capital income. The welfare gains of green tax reform from being able to correct this particular distortion are large.