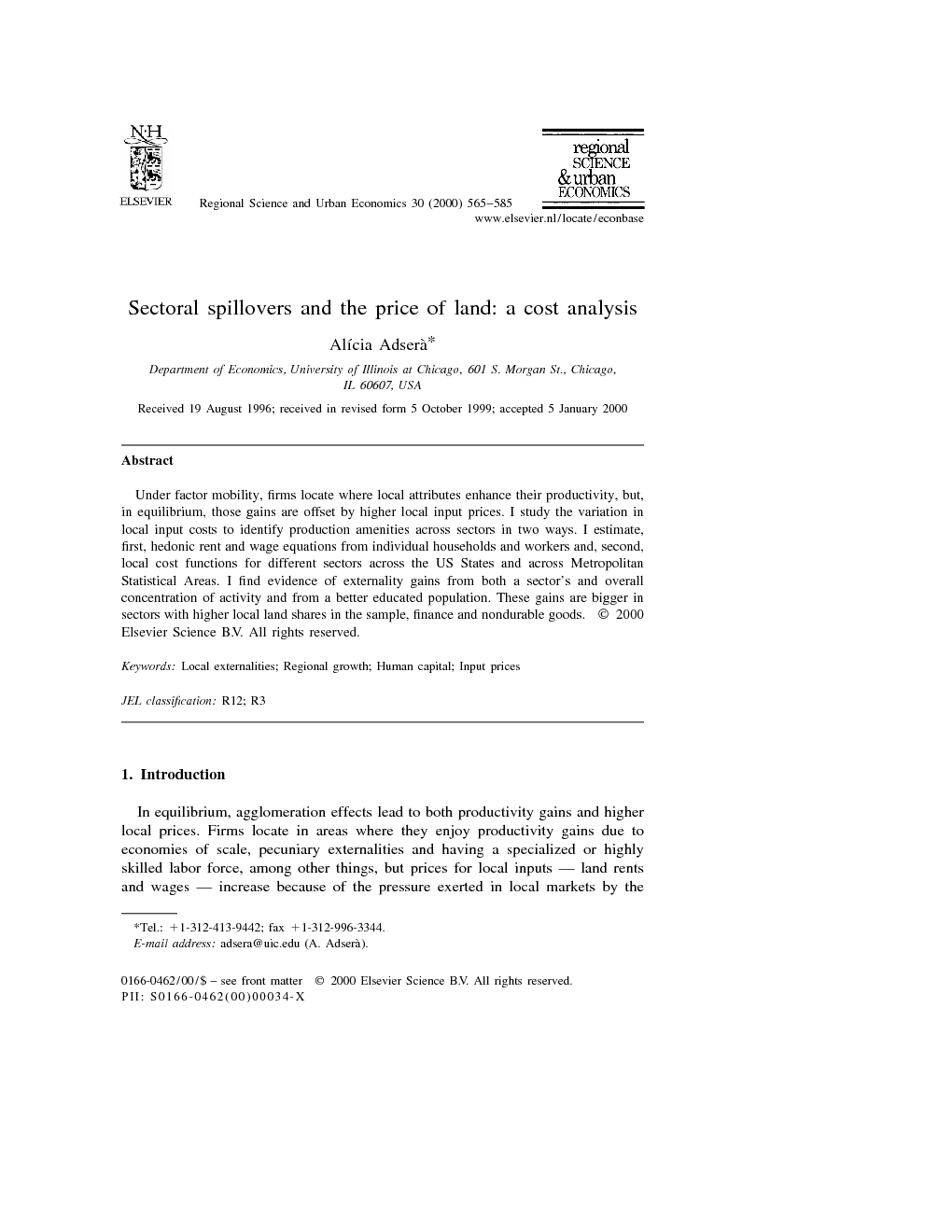 Under factor mobility, firms locate where local attributes enhance their productivity, but, in equilibrium, those gains are offset by higher local input prices. I study the variation in local input costs to identify production amenities across sectors in two ways. I estimate, first, hedonic rent and wage equations from individual households and workers and, second, local cost functions for different sectors across the US States and across Metropolitan Statistical Areas. I find evidence of externality gains from both a sector’s and overall concentration of activity and from a better educated population. These gains are bigger in sectors with higher local land shares in the sample, finance and nondurable goods.

In equilibrium, agglomeration effects lead to both productivity gains and higher local prices. Firms locate in areas where they enjoy productivity gains due to economies of scale, pecuniary externalities and having a specialized or highly skilled labor force, among other things, but prices for local inputs — land rents and wages — increase because of the pressure exerted in local markets by the increased demand (e.g., Roback, 1982, Beeson and Eberts, 1989 and Rauch, 1993). Accordingly, the variation in local prices emerges as an appropriate measure to identify the exact sources of externality gains among the list of potential candidates that the agglomeration literature has developed. Moreover, input prices may be studied separately for each sector to capture the particularities of externalities effects in each sector. In this paper I follow two strategies to study how differences in local costs reflect the importance of local production amenities across sectors. First, I estimate hedonic rent and wage equations using a sample from the 1990 Census. After controlling for housing and workers characteristics, I use measures of sectoral and total activity, sectoral diversity and average human capital for each Metropolitan Statistical Area (MSA) to account for differences in returns to local inputs. Since externality gains potentially differ across sectors, I estimate separate wage equations for the subsamples of workers in the finance and the manufacturing sectors, as well as in the durable and nondurable goods subsectors. As a second exercise, I construct a weighted cost variable for each sector, using land rents and sectoral wages in each region. This measure reflects variation in costs only due to local inputs and abstracts from prices of tradable inputs, which are similar across locations. I study the relation of this local cost variable to measures of local attributes for both the US states from 1969 to 1992 and Metropolitan Statistical Areas (MSAs) in 1990. Three findings stand out. First, the finance sector and the nondurable goods subsector profit the most from all types of externalities. Second, a higher level of human capital crucially enhances productivity across all sectors. Finally, measures of economic activity at the state level, rather than at the metropolitan or the regional level, are the most relevant to explain the variance in local costs. By contrast, measures of sectoral diversity or population size do not fare as well as theoretically expected. The paper is organized as follows. Section 2 presents a model of regional production and describes the two estimation strategies to identify the importance of local externalities using variation in local input costs. Section 3 introduces the types of externalities under study. Section 4 presents evidence from hedonic equations from household and individual data. Section 5 presents the estimated local sectoral costs equations for both the US states and the MSAs. Section 6 follows with some concluding comments.

In this paper I have studied the variance in local input costs to identify production externalities across sectors. Two types of externalities, those accruing from human capital and from the concentration of activity, consistently stand out as the more relevant across sectors. Human capital measures perform well both in the estimated cost functions and in the hedonic equations for all the sectors analyzed. A highly skilled population consistently improves productivity and pushes up both wages and rents, confirming earlier theoretical work (e.g., Lucas, 1988) as well as previous empirical results (e.g., Rauch, 1993). Schooling alone is the single most important explanation for differences in local costs. Both localization and urbanization economies are also important sources of productivity gains, particularly for the financial sector and, within manufacturing, the nondurable sector. In the financial world, where information is crucial, there is a clear incentive for clustering. Around the world, localization externalities have been key to the renewal of some decaying nondurable industries. Newly modernized textile firms in Northern Italy, the Swiss watch-making industry, or tile producers in Spain, which profit from being in clusters where joint learning occurs, are examples of this phenomenon. Other nondurable industries that tend to be bulky and perishable, such as food and kindred products, may be profiting from proximity to the market, that is, from urbanization externalities. A growing divergence in average wages across states in the finance and nondurable goods sectors can potentially be traced to a search for localization gains. In addition, the recent expansion of the finance sector, an avid competitor of local land, has clearly contributed to the uneven increase of land prices across the US since the mid 1980s. Dekle and Eaton (1993) describe a similar though more dramatic process in Japan prefectures. The lower local land shares in US sectors relative to Japan’s and the bigger size of the states relative to the prefecture’s account for the difference in intensity. Contrary to earlier results in the literature, sectoral diversity has a weak effect on productivity. Positive evidence of gains from diversity has been only found in some of the finance and nondurable estimates. The presence of sectoral diversity improves finance’s productivity mostly through greater risk diversification. Similarly, estimates for population size, which the literature has expected to work both as a consumption disamenity and a productivity amenity pushing up local costs, are not significant. Employment measures seem to proxy better these effects, specially at the metropolitan level. The state rather than the MSA stands out as the most relevant geographical unit to account for differences in sectoral productivity. Heavy intersectoral trade and networking among neighboring MSAs explains why the activity of the MSA alone performs poorly as a measure of the presence of externalities. To conclude, the use of a cost approach emerges as an appropriate alternative to the use of production functions to estimate the strength of local externalities. Further research should be concerned in estimating similar cost functions at smaller industry level and contrasting them with earlier results on the production analysis, such as those for two-digit industries in Brazil and the US in Henderson (1988). A closer look at the industries would allow to determine the importance of related sectors in localization decisions and to narrow the type of diversity that matters for each industry.