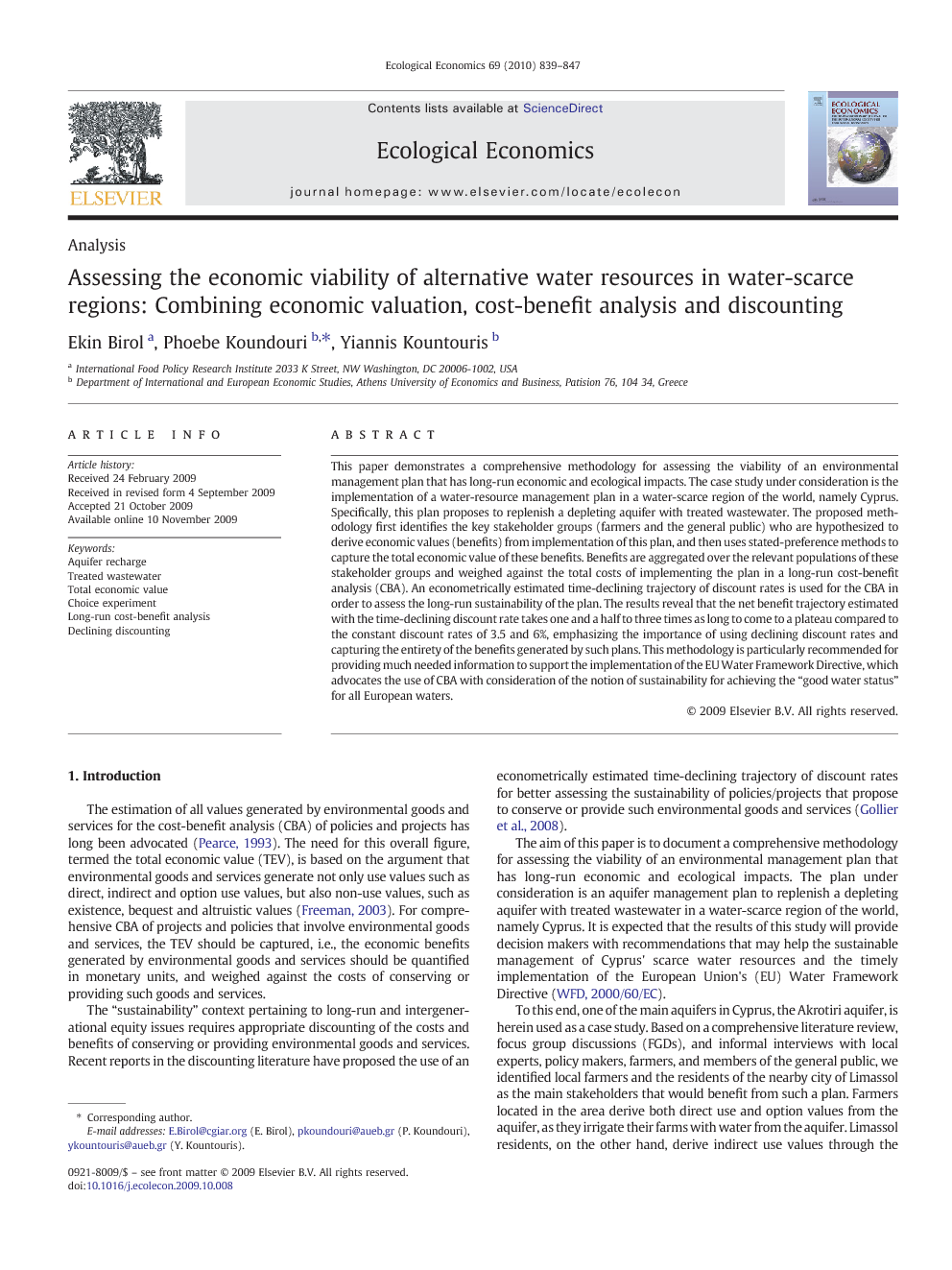 This paper demonstrates a comprehensive methodology for assessing the viability of an environmental management plan that has long-run economic and ecological impacts. The case study under consideration is the implementation of a water-resource management plan in a water-scarce region of the world, namely Cyprus. Specifically, this plan proposes to replenish a depleting aquifer with treated wastewater. The proposed methodology first identifies the key stakeholder groups (farmers and the general public) who are hypothesized to derive economic values (benefits) from implementation of this plan, and then uses stated-preference methods to capture the total economic value of these benefits. Benefits are aggregated over the relevant populations of these stakeholder groups and weighed against the total costs of implementing the plan in a long-run cost-benefit analysis (CBA). An econometrically estimated time-declining trajectory of discount rates is used for the CBA in order to assess the long-run sustainability of the plan. The results reveal that the net benefit trajectory estimated with the time-declining discount rate takes one and a half to three times as long to come to a plateau compared to the constant discount rates of 3.5 and 6%, emphasizing the importance of using declining discount rates and capturing the entirety of the benefits generated by such plans. This methodology is particularly recommended for providing much needed information to support the implementation of the EU Water Framework Directive, which advocates the use of CBA with consideration of the notion of sustainability for achieving the “good water status” for all European waters.

The estimation of all values generated by environmental goods and services for the cost-benefit analysis (CBA) of policies and projects has long been advocated (Pearce, 1993). The need for this overall figure, termed the total economic value (TEV), is based on the argument that environmental goods and services generate not only use values such as direct, indirect and option use values, but also non-use values, such as existence, bequest and altruistic values (Freeman, 2003). For comprehensive CBA of projects and policies that involve environmental goods and services, the TEV should be captured, i.e., the economic benefits generated by environmental goods and services should be quantified in monetary units, and weighed against the costs of conserving or providing such goods and services. The “sustainability” context pertaining to long-run and intergenerational equity issues requires appropriate discounting of the costs and benefits of conserving or providing environmental goods and services. Recent reports in the discounting literature have proposed the use of an econometrically estimated time-declining trajectory of discount rates for better assessing the sustainability of policies/projects that propose to conserve or provide such environmental goods and services (Gollier et al., 2008). The aim of this paper is to document a comprehensive methodology for assessing the viability of an environmental management plan that has long-run economic and ecological impacts. The plan under consideration is an aquifer management plan to replenish a depleting aquifer with treated wastewater in a water-scarce region of the world, namely Cyprus. It is expected that the results of this study will provide decision makers with recommendations that may help the sustainable management of Cyprus' scarce water resources and the timely implementation of the European Union's (EU) Water Framework Directive (WFD, 2000/60/EC). To this end, one of the main aquifers in Cyprus, the Akrotiri aquifer, is herein used as a case study. Based on a comprehensive literature review, focus group discussions (FGDs), and informal interviews with local experts, policy makers, farmers, and members of the general public, we identified local farmers and the residents of the nearby city of Limassol as the main stakeholders that would benefit from such a plan. Farmers located in the area derive both direct use and option values from the aquifer, as they irrigate their farms with water from the aquifer. Limassol residents, on the other hand, derive indirect use values through the consumption of locally produced vegetables, as well as non-use values from the ecological status of the local environment and the employment of locals in agriculture, both of which are supported by the aquifer. In our analysis, two distinct choice experiments (CEs) are performed on randomly selected members of these two key stakeholder groups, allowing us to estimate the use and non-use economic benefits that may arise as a result of the proposed aquifer management plan. These estimated benefits are aggregated over the relevant populations and weighed against the costs of providing such an intervention. Since the costs and benefits of this plan are expected to have impacts well into the future, a long-run CBA is conducted under different discount rate schemes (constant and declining discount rates). The results of this long-run CBA reveal that the net benefit generated by the aquifer management plan is positive and significant well into the future, regardless of the utilized discount rate scheme. However, the net benefit trajectory estimated with the declining discount rate is higher than those estimated with constant discount rates. Moreover, the net benefit trajectory under the declining discount rate trajectory takes one and a half to three times as long to come to a plateau compared to the constant discount rates of 3.5 and 6%. Our results, therefore, have implications for the use of declining discount rates for evaluating projects or policies with long-term ecological and economic impacts in general, and in terms of informing efficient water-resource management in Cyprus in particular. The methodology developed herein will especially benefit EU member states that are obligated to implement the WFD, since the Directive specifically calls for the application of long-run CBA and consideration of the sustainability criterion when developing and adopting measures aimed at achieving good water status for European water resources. The rest of the paper unfolds as follows: the next section describes the case study. Section 3 introduces the CE approach, the design and implementation of the two experiments, and their results. Section 4 reports the results of the CBA and discusses the use of different discount rates for public projects and policies having long-run impacts. The final section concludes the paper and draws policy implications.

This paper demonstrates a comprehensive framework for assessing the viability of an environmental management plan that has long-run economic and ecological impacts. The environmental management plan considered herein is an aquifer management plan that proposes to replenish a depleting aquifer with treated wastewater. The studied case is that of the Akrotiri aquifer in Cyprus, a water-scarce region of the world. The framework is implemented in three stages: first, the main stakeholders that would bear the costs of and derive the benefits from this plan are identified through various qualitative methods (e.g., focus group discussions, informal interviews with the public, and consultations with experts and policy makers), as well as through thorough literature reviews on aquifer management in water-scarce regions in general and on the Akrotiri aquifer and wetland in particular. The key stakeholder groups identified as benefiting from the aquifer are local farmers and residents in the nearby city of Limassol. The former derive direct use and option values from the aquifer, as they depend on the quality and quantity of water for their livelihoods, whereas the latter derive indirect use values through the consumption of locally produced vegetables, as well as non-use values from the ecological status of the local environment and from the agricultural jobs supported by the aquifer. Second, two distinct CEs are implemented with these two stakeholder groups, in order to capture the specific economic values that each stakeholder group derives from such a plan. In the farmer CE, the aquifer management plan is defined in terms of the quality and quantity of water in the aquifer and the number of farmers that can be employed in the area's agricultural sector. For the resident CE, the aquifer management plan is defined in terms of water quality, agricultural employment and the area's ecological conditions. In both experiments, the utilized payment vehicle is an increase in the price per m3 of water consumed by the farm/household. The CE results reveal that, on average, the farmers and residents are not opposed to an aquifer management plan that proposes to replenish the aquifer with treated wastewater. Both stakeholder groups realize significant compensating surplus values, and such a plan would generate both use and non-use values. Third, the long-run economic efficiency of implementing such a plan is assessed. To this end, a CBA is conducted and the estimated economic values (benefits) accrued by the two stakeholder groups (measured in CS terms) are aggregated over their relevant populations and added to capture the total economic value (i.e. total economic benefits) generated by the plan. The calculated total economic benefits are weighed against the total (fixed and variable) costs of implementing such a plan. Since this proposed plan is expected to have long-run impacts on the local economy and ecology, the plan's sustainability is tested using a long-run cost CBA, and the net present value (NPV) of the plan is estimated using two different discount rate schemes, namely constant (3.5% and 6%) and declining discount rates (DDRs). The NPV results reveal that the net benefit generated by the plan is positive and significant well into the future, regardless of the utilized discount rate scheme. The implementation of this plan would yield a welfare (or Pareto) improvement that would not only increase economic benefits to all the stakeholders in both the short- and long runs, it would also help Cyprus in its efforts to meet the EU WFD requirements by 2015. The NPV results, however, reveal that the net benefit trajectory estimated with the DDR is higher than those estimated with the constant discount rates. Moreover, depending on the constant discount rate used, the net benefits under the DDR trajectory take one and a half to three times as long to come to a plateau. These findings indicate that DDRs should be used when evaluating projects or policies with long-term impacts, in order to ensure the attainment of sustainable development goals. Overall, this methodology is recommended for the assessment of any environmental plan that is expected to have long-run economic and ecological impacts that would affect various stakeholders (including future generations). In particular, this framework would be useful for EU member states that are obligated to implement the WFD, which explicitly calls for estimation of the total economic value of a potential plan, consideration of the costs and benefits that would accrue to different stakeholders, and the application of a thorough CBA that takes sustainability into account.