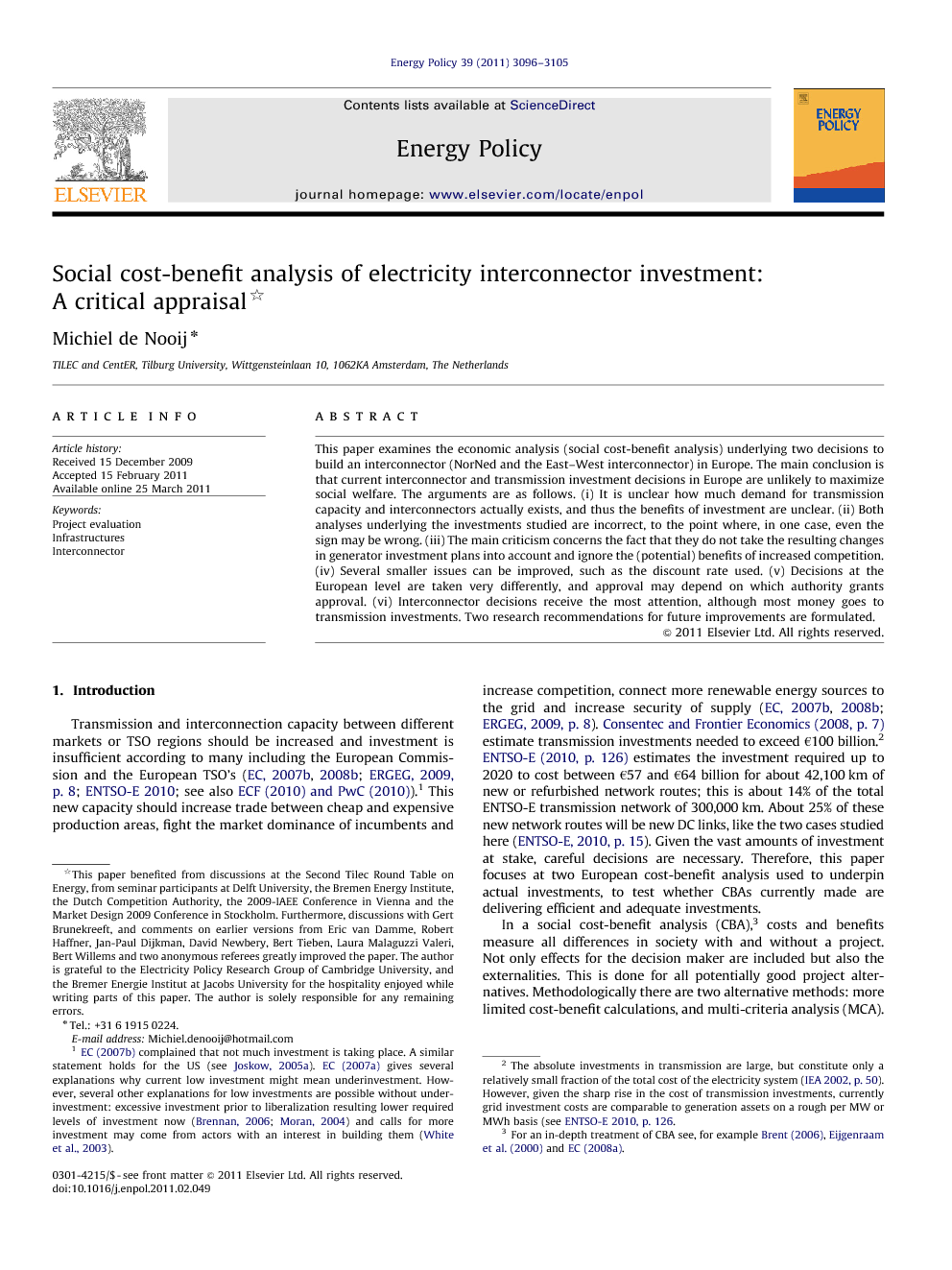 This paper examines the economic analysis (social cost-benefit analysis) underlying two decisions to build an interconnector (NorNed and the East–West interconnector) in Europe. The main conclusion is that current interconnector and transmission investment decisions in Europe are unlikely to maximize social welfare. The arguments are as follows. (i) It is unclear how much demand for transmission capacity and interconnectors actually exists, and thus the benefits of investment are unclear. (ii) Both analyses underlying the investments studied are incorrect, to the point where, in one case, even the sign may be wrong. (iii) The main criticism concerns the fact that they do not take the resulting changes in generator investment plans into account and ignore the (potential) benefits of increased competition. (iv) Several smaller issues can be improved, such as the discount rate used. (v) Decisions at the European level are taken very differently, and approval may depend on which authority grants approval. (vi) Interconnector decisions receive the most attention, although most money goes to transmission investments. Two research recommendations for future improvements are formulated.

Several lessons arise in the comparison of the business case for the Irish East–West interconnector with the CBA approach. First, the largest benefit is an increase in the security of supply, estimated in terms of avoiding the expense of a new generator, which would otherwise be needed to maintain security of supply at the same level. Imports from the UK are assumed to be always possible. However, the non-dispatchable capacity in the UK has neither been taken into account, nor has the fact that UK generators will invest less to reduce abundant capacity, reducing the possibility for low-cost imports. Second, competition benefits were cited as important, but are not quantified. Third, the benefits of reduced wind curtailment are crucially dependent on new investment in wind energy and the extent to which the system can handle it, as well as the correlation between wind in Ireland and in the UK. Fourth, the business case overestimates the benefits of reduced carbon credit payments on imported electricity because now the Irish power importers will have to buy these permits in the UK instead of in Ireland. Fifth, the discounting seems to be too negative; the social benefits are calculated using the pre-tax WACC instead of the post-tax WACC. Sixth, the calculation available is less detailed than the one available for the NorNed cable. But like in the Dutch case, the interconnector investment is published in more detail than domestic investment although this latter requires more money.20 The main conclusion is that EirGrid's conclusion that the East–West Interconnector is socially attractive does not stand up to scrutiny, the true conclusion could be negative instead of positive.