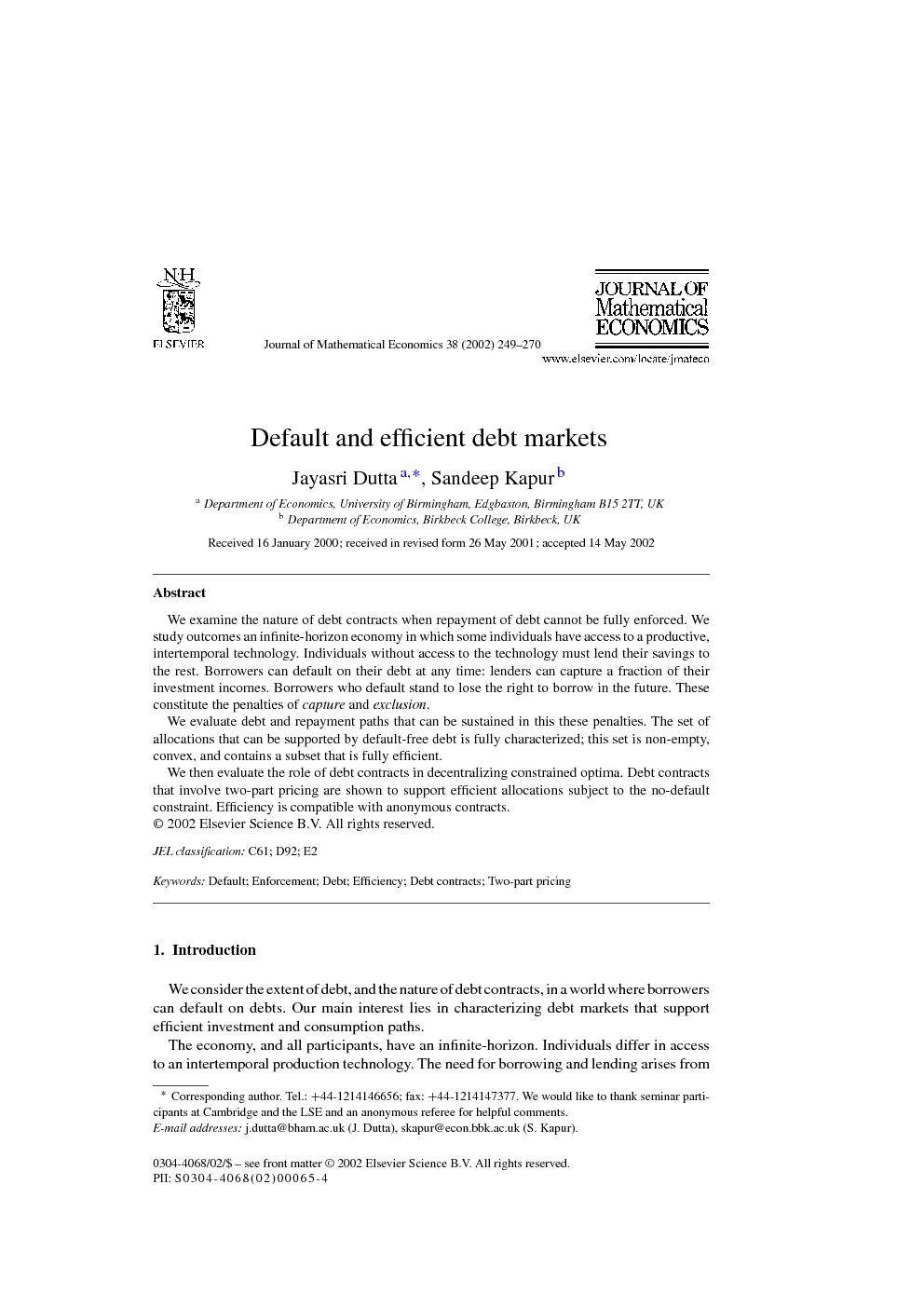 We examine the nature of debt contracts when repayment of debt cannot be fully enforced. We study outcomes an infinite-horizon economy in which some individuals have access to a productive, intertemporal technology. Individuals without access to the technology must lend their savings to the rest. Borrowers can default on their debt at any time: lenders can capture a fraction of their investment incomes. Borrowers who default stand to lose the right to borrow in the future. These constitute the penalties of capture and exclusion. We evaluate debt and repayment paths that can be sustained in this these penalties. The set of allocations that can be supported by default-free debt is fully characterized; this set is non-empty, convex, and contains a subset that is fully efficient. We then evaluate the role of debt contracts in decentralizing constrained optima. Debt contracts that involve two-part pricing are shown to support efficient allocations subject to the no-default constraint. Efficiency is compatible with anonymous contracts.

The debt contract: In Theorem 4, we show that two-part pricing, consisting of a participation fee and a marginal rate of return on loans, can support all efficient and sustainable allocations. A natural interpretation of this contract is that of “banking fees”. Depositors pay fees to banks, who have the option of declaring bank failure. Banks compete for funds, bidding up the deposits rate to ρ. Importantly, they take fees as given, and depositors are aware that a cut in fees can trigger bank failures. Typically, the fee is non-anonymous, i.e. depositor specific. • Anonymity and debt markets: debt contracts that support constrained optima typically involve lack of anonymity. As this provides natural difficulties of interpretation in decentralization, we evaluate the possibility of anonymous two-part contracts in Corollary 6. There, as in Theorem 4, lump-sum redistributions are necessary in the initial period. Thes redistributions are necessary for efficiency, and ensure participation. Otherwise, lenders with low endowments may choose not to save. We do not know, as yet, whether anonymous, non-linear contracts can support efficient allocations without redistributions. • Two-part pricing is routinely used to achieve efficiency in economies with non-convex technologies (e.g. Brown (1991)). It may appear that we use them for similar reasons. This is not true: the set of λ-sustainable allocations is convex. The need for a fixed fee is a direct consequence of the penalty of exclusion. Borrowers need to make rents every period in order not to default. These rents can be generated in more than one way. Fixed fees can generate rents for the borrower without doing violence to the marginal conditions for a lender’s optimum. It is likely, then, that a similar construction suffices in other problems involving moral hazard and the threat of termination, including “efficiency wages”, or risk-sharing with storage. • Optima and equilibria: We have looked for debt-contracts that support efficient allocations. Obviously, inefficient λ-sustainable allocations may be achieved by other contracts, including more standard debt contracts of the type In related work (Dutta and Kapur, 1998 and Dutta and Kapur, 1999), we evaluate the restrictions on lending rates rt that correspond to λ-sustainable debt-plans. • The two penalties: We note that niether penalty is redundant. In the absence of exclusion, effective debt-contracts correspond to capture at each t: which cannot support first-best paths if λ>1. Capture is quite definitely non-redundant, as the set of sustainable allocations increases monotonically with λ ( Corollary 3); so does the set of efficient sustainable allocations ( Theorem 4). From Corollary 4, non-trivial debt and consumption paths are impossible if λ=0. • Endowments and sustainability: Our model is special in many ways. While some of these simplify the problem, the endowment condition is critical in deducing (SC). We assume et=0 for t≥1. This condition is useful in focusing attention on the need for lending and borrowing; our characterization of the sustainability condition relies essentially on this property. The general condition, which restricts CL1−EL1 similarly, is valid for consumption paths that satisfy cLt≥eLt for t≥1. This is certainly true if endowments do not increase too fast; modified versions of our results hold if endowments growth is lower than θ, so that perpetual production is necessary to attain efficiency. Further, Corollary 4 may fail with some endowment distributions, as we show in Dutta and Kapur (1999); it is also possible that Corollary 2 fails for some endowment paths.