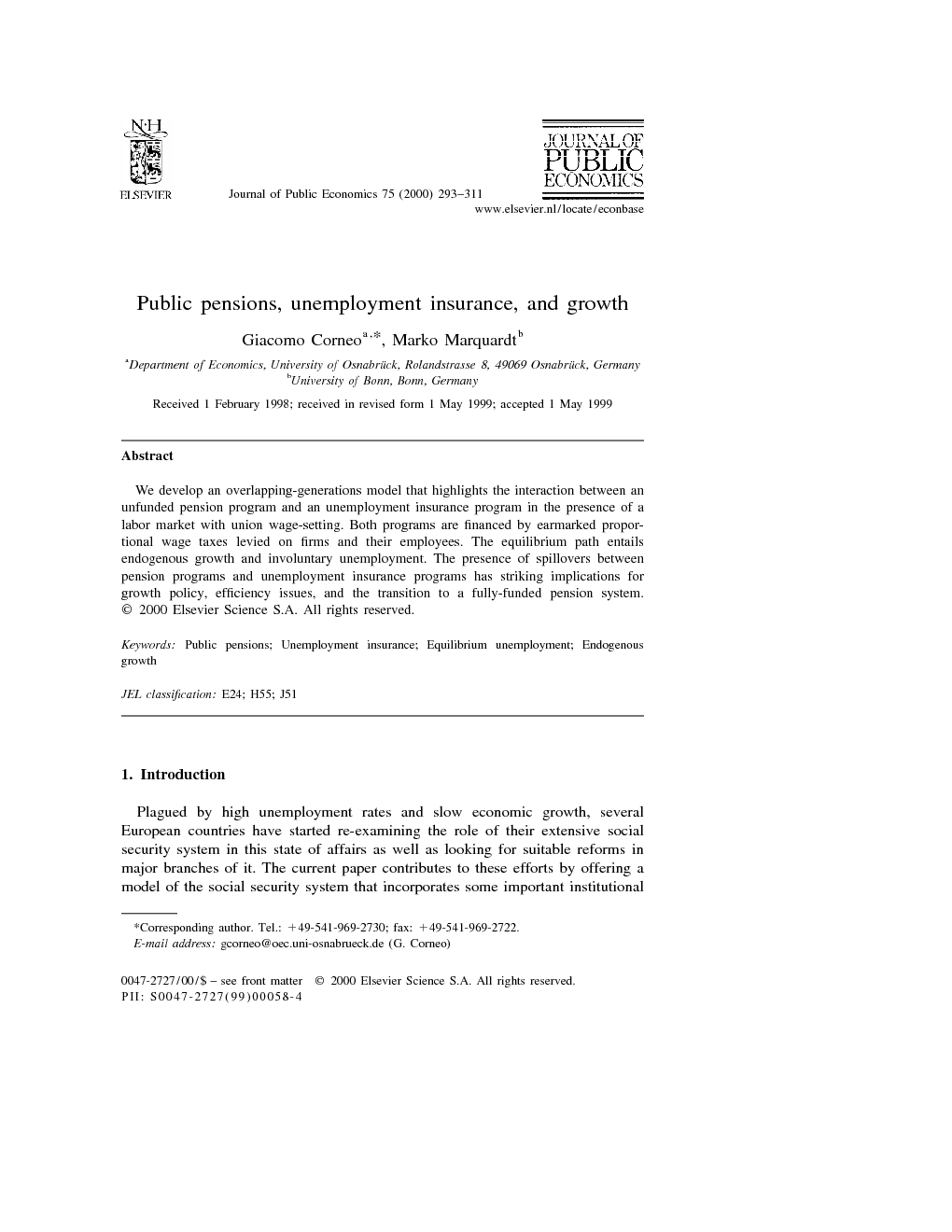 We develop an overlapping-generations model that highlights the interaction between an unfunded pension program and an unemployment insurance program in the presence of a labor market with union wage-setting. Both programs are financed by earmarked proportional wage taxes levied on firms and their employees. The equilibrium path entails endogenous growth and involuntary unemployment. The presence of spillovers between pension programs and unemployment insurance programs has striking implications for growth policy, efficiency issues, and the transition to a fully-funded pension system.

The current model offers a manageable framework of analysis by incorporating a number of simplifying assumptions. In order to assess the robustness of our results, we now digress on the nature of some potentially controversial assumptions and how changes might affect our main conclusions. Impure redistributive effects In our model the PAYG system is treated as a purely intergenerational transfer system and the unemployment insurance as a purely intragenerational transfer system. This distinction is useful for modeling purposes as it enables us to detail the spillovers between the two programs in a very neat way. In reality however, neither program is limited to a single form of redistribution. On the one hand, in some countries people who are temporarily unemployed are still entitled to the same retirement benefits as those permanently employed. On the other hand, generations that are more severely hit by unemployment than others benefit disproportionately more from an unemployment insurance program. Different models of the trade union An assumption of our model that needs some discussion is that concerning the objective function of the trade union. We chose to adopt a Stone–Geary specification, which models in a simple way the trade-off that is perceived as being the crucial one for union decision-making, the trade-off between the unemployment rate and the real wage. A technical property of this specification is that it imposes unitary elasticity of substitution between the union’s objectives. While this may appear as a restrictive assumption, it turns out to be necessary in order to avoid that the equilibrium rate of unemployment converges either toward zero or toward one. Alternatively, one could adopt a model of collective decision-making within the trade union. The presence in our framework of pensioners who have conceivably been union members when young and the fact that the PAYG system links the pension benefit to the current wage raise some interesting issues about modeling. Arguably, the pensioners should play some role in shaping the union’s policy, but it is not clear under which type of collective decision rules this should occur, as many of them seem a priori plausible. One might also wonder about the changes induced by assuming that wage bargaining occurs at a decentralized level, possibly in an insider/outsider type of setting. While this alternative assumption will generally lead to a different equilibrium unemployment rate, we expect the qualitative properties established here to carry over to that alternative setting. If, for example, there is wage bargaining at the firm level, an increase in the contribution rates of firms might not be offset by a decrease of the gross wage at the partial equilibrium of a single firm, but we still expect some counteracting wage movement to occur in the general equilibrium. Altruism and endogenous fertility A branch of literature on pension systems incorporates the role of intrafamily altruism and endogenous fertility decisions (e.g. Barro, 1974;Lapan and Enders, 1990;Zhang, 1995). Allowing for altruism and endogenous fertility in our model poses some questions beyond those studied by the previous literature. In this respect the main novelty offered by our model is a unionized labor market which generates involuntary unemployment. Combining this feature with altruistic preferences and endogenous fertility decisions leads one to discuss, for example, the role of attitudes toward risk. To the extent that the occurrence of unemployment for one’s children is a stochastic event against which no full insurance is provided by the government, the degree of risk aversion should play an important role in shaping optimal savings, intrafamily transfers, and fertility decisions. Furthermore, the degree of intrafamily altruism, especially toward unemployed family members, may affect the degree according to which the trade union cares about the unemployment level. Potentially, these effects might significantly alter the way in which the transfer system set up by the government impinges upon unemployment and growth. Incorporating these features is a promising avenue for future research.