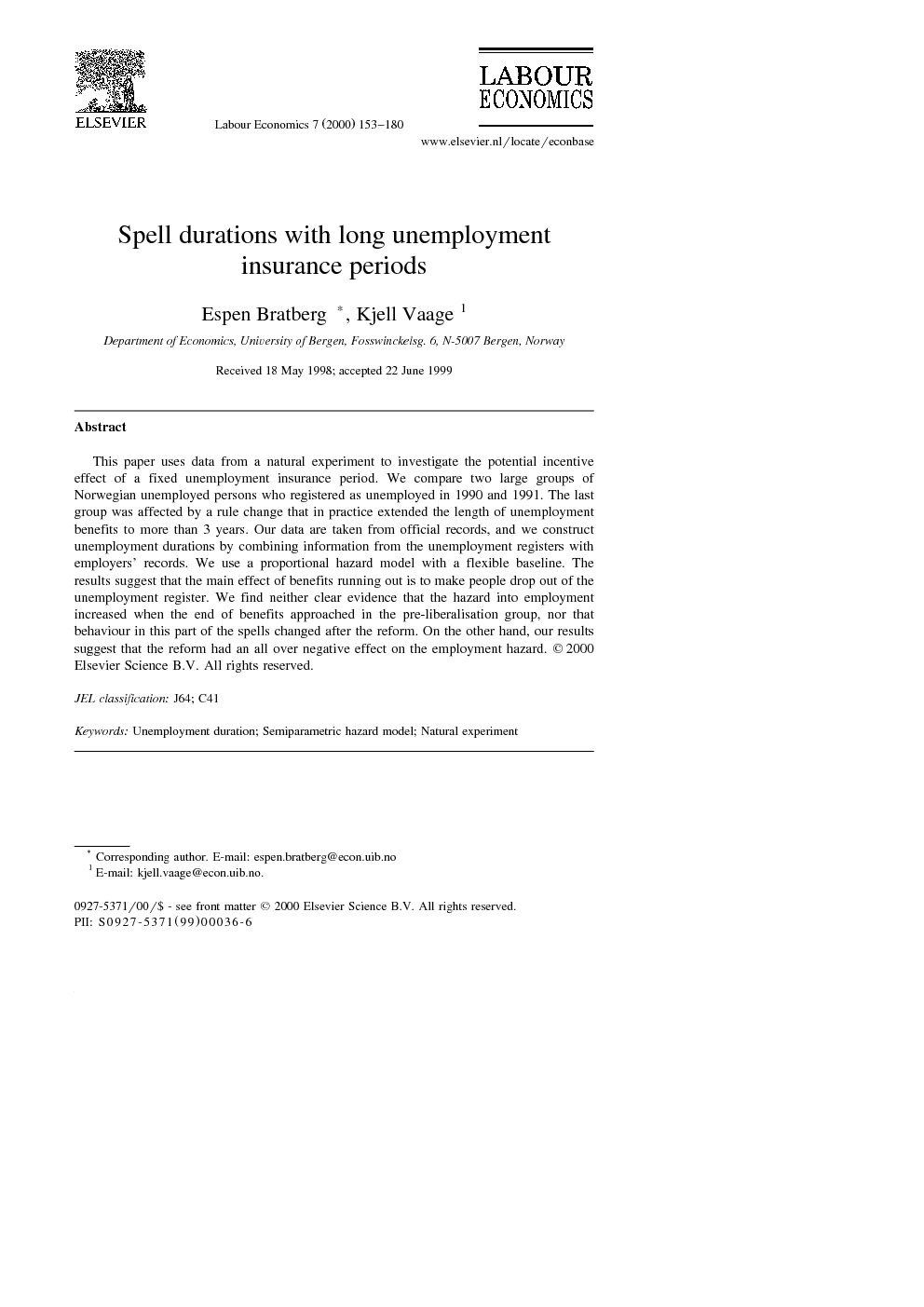 This paper uses data from a natural experiment to investigate the potential incentive effect of a fixed unemployment insurance period. We compare two large groups of Norwegian unemployed persons who registered as unemployed in 1990 and 1991. The last group was affected by a rule change that in practice extended the length of unemployment benefits to more than 3 years. Our data are taken from official records, and we construct unemployment durations by combining information from the unemployment registers with employers' records. We use a proportional hazard model with a flexible baseline. The results suggest that the main effect of benefits running out is to make people drop out of the unemployment register. We find neither clear evidence that the hazard into employment increased when the end of benefits approached in the pre-liberalisation group, nor that behaviour in this part of the spells changed after the reform. On the other hand, our results suggest that the reform had an all over negative effect on the employment hazard.

Standard search theory predicts that the duration of an unemployment spell is increasing in the level of unemployment benefits, because the cost of rejecting a job offer decreases. Furthermore, if benefits are cut after a fixed period, the reservation wage decreases, and the exit rate out of unemployment increases as the time of running out approaches (Mortensen (1977)). Of these two hypotheses, the first one is fairly well established empirically. A number of contributions deal with the connection between benefit size and unemployment duration,3 even though there are different results as to the magnitude of the effect. The second prediction is less researched, and our purpose with the present paper is to add to the knowledge of the potential incentive effects of a fixed unemployment insurance period. Doing so, we use two large samples of extensive Norwegian register data covering a period including a natural experiment — in 1992 a former rule of 13 weeks benefits withdrawal after 80 weeks was abolished. Thus, we can compare a group of unemployed who were affected by this policy change with another consisting of individuals who were not. Compared to most other European countries, the Norwegian unemployment rate has been remarkably low through most of the 1980s, mostly staying between 1.5 and 3% until 1988. Then, in 1989, unemployment increased sharply and stayed at approximately 5–6% of the labour force during the early 1990s. Unemployment insurance is universal for all employees with earnings above a minimum level. Until 1991, the maximum entitlement period was 80 weeks, followed by 26 weeks without benefits. One could then receive unemployment benefits (UB) for a second 80-week period. The alternative to UB for those who did not manage to get a job, would be means tested social benefits. In May 1991, as a response to the increasing number of long-term unemployed, the length of the period without UB was reduced to 13 weeks. One year later, it was then decided that if the unemployment agencies had not offered an individual a new job or a labour market programme after 80 weeks, benefits should no longer be withdrawn in the 13 weeks period. Thus, from May 1992, it became possible to receive UB for a continuous period of 186 weeks.4 As we have already suggested, the empirical literature concerning the effect of fixed benefits periods is relatively scarce. Meyer (1990) and Katz and Meyer (1990) find that spikes in the hazard out of unemployment may be explained by the end of benefits approaching.5Fallick (1991) and Narendranathan and Stewart (1993a), however, find that the effect of benefits decreases over time. These results are harder to reconcile with the prediction that the tendency to leave unemployment increases at the end of the benefits period. Micklewright and Nagy (1996), using Hungarian post-transition data, find no rise in the hazard near the time of benefit exhaustion. Winter-Ebmer (1998), using Austrian data, finds that males react to extended benefits duration but females do not. Apart from the academic issue of whether the theory yields correct hypotheses, there are of course important policy implications. For instance, Layard et al. (1991) advocate using labour market policies similar to those of Sweden to keep long term unemployment down: a fixed UB period combined with active manpower policy. However, it is not clear that a policy that consists of labour market training programmes and relief jobs does not distort the potential incentives from a fixed benefit period. Carling et al. (1996), using Swedish data, investigate that question and conclude that such distortions probably do not take place. Their evidence of the effects of benefit exhaustion on the hazard into employment is, however, only marginally statistically significant. Korpi (1995), in a study of youth unemployment, does not find benefits to have any significant effect on the rate of transition. The Norwegian labour market policy includes a variety of training programmes and relief jobs, and thus resembles that of Sweden. Until 1992, these countries also were similar in having a fixed benefits period, even though it was longer in Norway. Researching Norwegian data can therefore have bearing both on the incentive and the labour market programme issues. In the present paper, we focus on the former. Recently extensive Norwegian register data have become available. Using data from these registers, we analyse two random samples of the inflow to the unemployed population, before and after the 1992 changes in unemployment insurance rules. Hernæs and Strøm (1996) have used data from the same registers, but focus on duration dependence in general. To our knowledge, the present analysis is the first that addresses the fixed UB period question with Norwegian data. Our data sets are large and utilise information from the unemployment registers, the employers' register, and other sources. Using a semiparametric proportional hazard model, we estimate exit rates into employment. Search theory predicts, ceteris paribus, individuals with UB in the first sample to have a jump in the transition rate into employment when the first 80 weeks entitlement period has expired. Since persons in the second sample would not be faced with a benefit withdrawal after 80 weeks, a corresponding jump therefore should not be observed there. In addition, the prospect of benefit cuts should lead to increased search efforts in the entire unemployment period of the first sample compared to the second one. In both of our samples we expect to find different exit patterns between persons with and without entitlement to benefits. Furthermore, the 1992 rule changes are expected to have no effect on unemployed individuals not receiving UB. The non-receivers therefore function as a control group. We now proceed by presenting our model specification in Section 2. In Section 3we describe our data sets and discuss the definition of unemployment spells. Our results are presented and discussed in Section 4. It turns out that the analysis does not give empirical support to the notion that the 1992 reform produced significant changes in the behaviour around 80 weeks of unemployment duration. However, the reform appears to have had effects on the earlier stages of the search process, in that the first year's exit rates for the second sample UB-receivers are lower than in the first sample. Section 5contains a critical assessment of the findings.

We have investigated the potential incentive effect of a fixed unemployment insurance period by comparing two large groups of Norwegian unemployed persons, where the last was affected by a rule change that in practice extended the benefits to more than 3 years. The main body of the analysis was performed within the framework of a proportional hazard model with a flexible baseline. Our results suggest that the main effect of benefits running out is to make people drop out of the unemployment register. There is no evidence that the hazard into employment increased when the end of benefits approached in the group that was not affected by the liberalisation of compensation rules. Consequently, we cannot reject the null hypothesis that behaviour around benefits expiration was unaffected by the change. Our results conform with some previous research, but not with US studies that find that benefits expiration significantly increases the exit rate into employment. One explanation may be the attractiveness of labour market programmes. Alternatively, the differences may be explained by the incentive effects being outweighed by a reduced job offer probability because of the long benefit period. On the other hand, our results indicate that the reform appeared to have an all over negative effect on the employment hazard. This suggests that fixed duration benefit periods do have positive incentive effects, even in cases where the periods are as long as in Norway. Taken together with previous research, one may still argue in favour of the policy recommendation that the unemployment benefits period should be fixed.