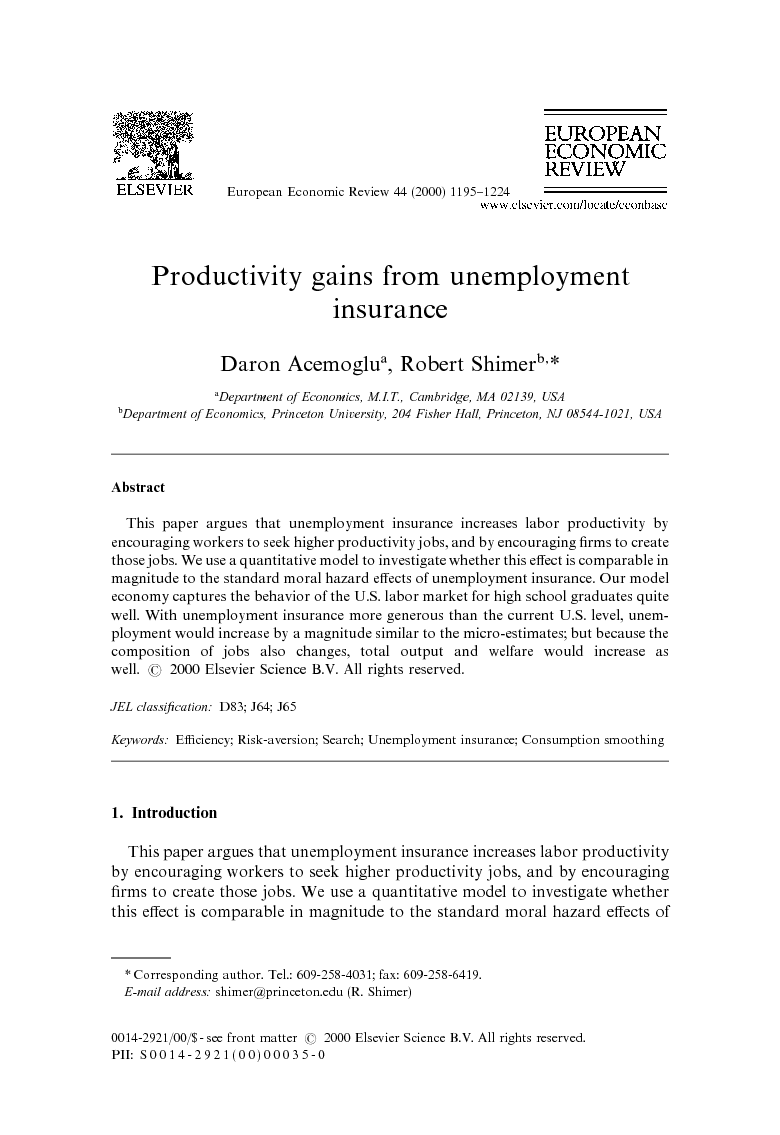 This paper argues that unemployment insurance increases labor productivity by encouraging workers to seek higher productivity jobs, and by encouraging firms to create those jobs. We use a quantitative model to investigate whether this effect is comparable in magnitude to the standard moral hazard effects of unemployment insurance. Our model economy captures the behavior of the U.S. labor market for high school graduates quite well. With unemployment insurance more generous than the current U.S. level, unemployment would increase by a magnitude similar to the micro-estimates; but because the composition of jobs also changes, total output and welfare would increase as well.

Conventional wisdom views unemployment insurance as a serious distortion that we have to live with in order to smooth income risk and consumption variability. In this paper, we have argued that moderate unemployment insurance may actually improve the allocation of resources. Unemployment insurance enables workers to pursue riskier options, including jobs that are harder to get, but possibly also more productive. As a result, moderate UI may raise output by improving the composition of jobs. In practice, however, this effect of UI may be outweighed by the traditional moral hazard cost: insured workers search less hard for jobs, and therefore spend more time unemployed. Moreover, one might conjecture that the importance of uninsured risks is limited by workers’ ability to self-insure by building up buffer stocks of assets. To investigate the quantitative importance of these opposing forces, we constructed a dynamic model in which workers make search effort, savings, and job application decisions. Although the decisions in question are complex, our model is sparse, enabling us to calibrate the few parameters to U.S. data, in particular to the labor market for high school graduates. The model performs well not only along the dimensions in which it is calibrated, but in a number of other dimensions as well, including the standard deviation of annual income, the decline in consumption following job loss, and the responsiveness of unemployment duration and wages to the magnitude and duration of unemployment benefits. Armed with the confidence that this model captures some of the tradeoffs faced by workers in real labor markets, we investigated the implications of different UI policies on unemployment, output, labor productivity, and welfare. We find that reducing UI from its current U.S. level would reduce both risk sharing and total consumption. Conversely, moderate increases in UI raise output and improve risk sharing. As this is a calibration exercise, our results are necessarily sensitive to parameter choices. To address this issue, we verified the robustness of our results to several key parameter changes. A complementary strategy would be to look for direct evidence that more generous unemployment insurance programs encourage the creation of more specialized and higher productivity jobs. At a more general level, we believe that more work needs to be done to understand the role and optimal design of UI programs. Labor market reform is a key issue in Europe. Social insurance programs, especially UI programs, are likely to be modified during the next decade. Similar reforms are underway in the U.S. If we are correct that social insurance programs have a beneficial effect not only on welfare but also on output and productivity, the reforms may have very different consequences than currently envisioned. Finally, we have assumed that UI is provided by the government. Why unemployment insurance is almost always publicly provided, in contrast to most other insurance contracts, remains an important, unresolved question.22 The answer will likely be relevant to the optimal design of unemployment insurance programs.