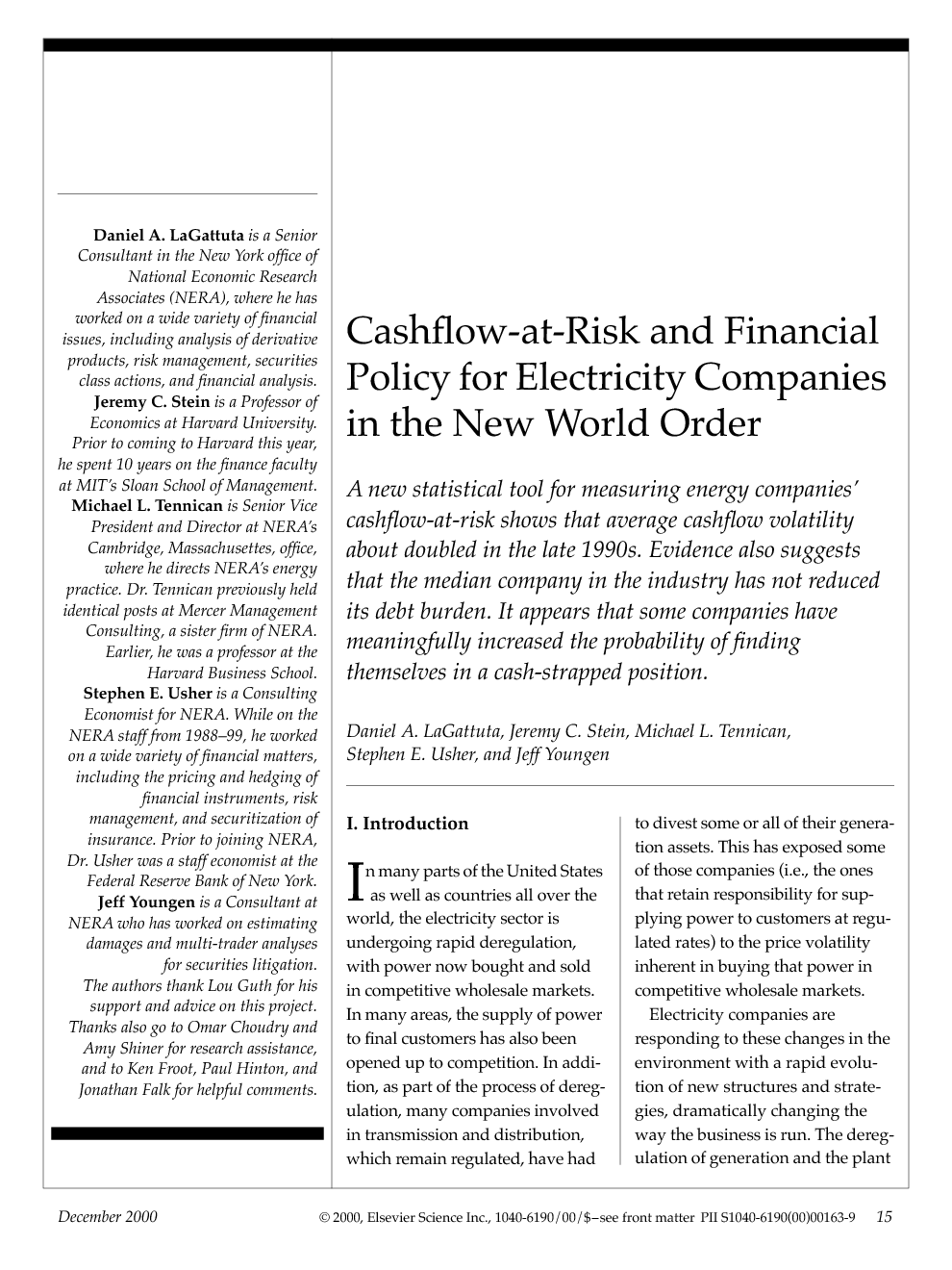 A new statistical tool for measuring energy companies' cashflow-at-risk shows that average cashflow volatility about doubled in the late 1990s. Evidence also suggests that the median company in the industry has not reduced its debt burden. It appears that some companies have meaningfully increased the probability of finding themselves in a cash-strapped position.

In many parts of the United States as well as countries all over the world, the electricity sector is undergoing rapid deregulation, with power now bought and sold in competitive wholesale markets. In many areas, the supply of power to final customers has also been opened up to competition. In addition, as part of the process of deregulation, many companies involved in transmission and distribution, which remain regulated, have had to divest some or all of their generation assets. This has exposed some of those companies (i.e., the ones that retain responsibility for supplying power to customers at regulated rates) to the price volatility inherent in buying that power in competitive wholesale markets. Electricity companies are responding to these changes in the environment with a rapid evolution of new structures and strategies, dramatically changing the way the business is run. The deregulation of generation and the plant divestitures often required as part of the process have led many companies, both other utilities expanding geographically and independent power producers, to invest in what were formerly monopoly franchise areas. Many companies have also embarked on programs of mergers and acquisitions, including many “convergence” mergers and acquisitions involving gas and electric companies. Many of the recent investments and acquisitions have been across national boundaries, with U.S. firms moving into Europe, Latin America, and elsewhere, and with European firms moving into the United States and Latin America. The industry's quickly changing environment has clearly altered the risk of doing business for most electric power companies. But any quantification of changes in a company's overall risk has been difficult to achieve, and precise measurement has been, until now, non-existent. To fill this gap, we have developed a sophisticated statistical tool for measuring energy companies' cashflow-at-risk, or C-FaR for short. C-FaR quantifies the risk of unforeseen shortfalls in earnings before interest, taxes, depreciation, and amortization (EBITDA). Our C-FaR model comprises a database of quarterly cashflow and other financial data from approximately 100 electricity companies over the 10-year period 1990–1999, along with a statistical methodology for transforming the data into peer-benchmarked risk measurements. 1 Even though our database contains a number of companies that remain wholly or largely under traditional forms of regulation in monopoly franchise areas, our analysis reveals a significant rise in cashflow volatility during the four years 1996–1999, which we loosely characterize as representing the beginning of the electric industry's new world order, as compared to the old order that prevailed before 1996. (This point is discussed further in Section III below.) Interestingly, the data also suggest that, at the same time that cashflow volatility has increased sharply, electric companies' capital structure policy has hardly changed at all. This can be seen in Table 1. Median balance sheet ratios (e.g., debt-to-assets) have hardly changed since the beginning of the decade, and measures of interest coverage (e.g., EBIT-to-interest) have also remained nearly constant.

Our analysis makes it clear that the new world order in the electricity industry has given rise to substantially more-volatile cashflows. Indeed, average cashflow volatility about doubled in the late part of the 1990s, compared with the early part of the decade. The evidence also suggests that the median company in the industry has not reduced its debt burden over the past decade. Putting these facts together, we find that the median company's 5-percent worst-case coverage ratio dropped by about one-third, from 2.23 to 1.65, over the same period. This drop in worst-case coverage ratio suggests that some companies have meaningfully increased the probability of finding themselves in a cash-strapped position. In particular, this may especially be likely to be true of companies with relatively high stock price volatility and low profitability since, as we have shown, these are the sorts of companies for whom cashflow volatility is the greatest. Whether the probability of such financial distress is now at a level that one would characterize as “too high” in absolute terms is a determination that would have to be based on an individual electric company's financial information. Our C-FaR model can be a useful tool to enable industry participants to address this type of question with more quantitative precision. More generally, by allowing managers to stress-test their cashflows, our C-FaR model can help them to think about business strategy, capital structure, and risk management in a more coherent and integrated fashion. ■