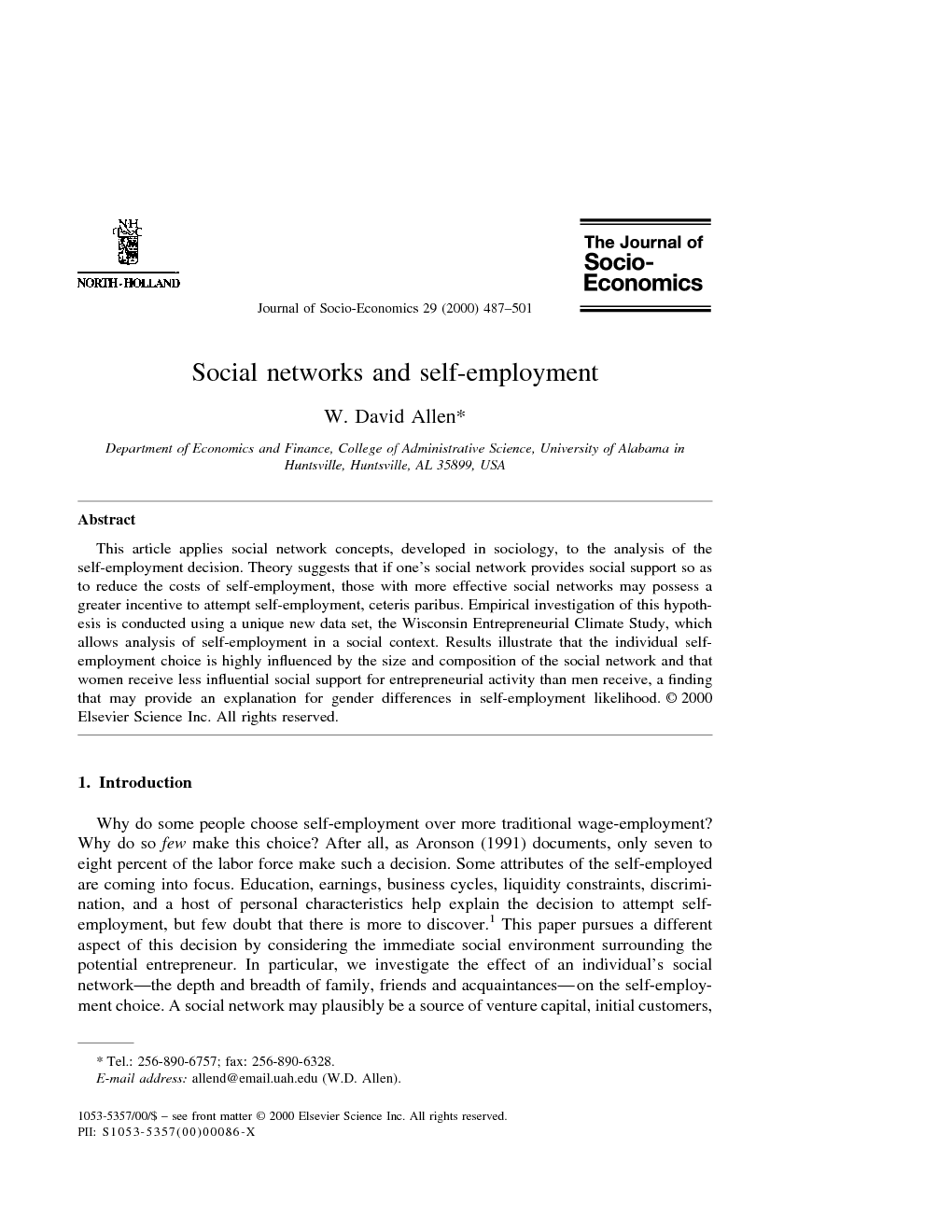 Why do some people choose self-employment over more traditional wage-employment? Why do so few make this choice? After all, as Aronson (1991) documents, only seven to eight percent of the labor force make such a decision. Some attributes of the self-employed are coming into focus. Education, earnings, business cycles, liquidity constraints, discrimination, and a host of personal characteristics help explain the decision to attempt self-employment, but few doubt that there is more to discover. 1 This paper pursues a different aspect of this decision by considering the immediate social environment surrounding the potential entrepreneur. In particular, we investigate the effect of an individual’s social network—the depth and breadth of family, friends and acquaintances—on the self-employment choice. A social network may plausibly be a source of venture capital, initial customers, information, and psychological support. In these ways it may have a significant impact on the net benefits of self-employment and may be the critical factor that convinces someone to become his or her own boss. This study proceeds as follows. First, the concept of social networks is borrowed from the sociological literature and reworked to fit more comfortably into a formal neoclassical economic model. This analysis lays a theoretical foundation for the paper’s central hypothesis, that a more effective social network increases the likelihood of self-employment, ceteris paribus. Empirical analysis is then conducted using data that allow analysis of entrepreneurial activity within a social context. The paper concludes with a discussion of the results, which in general suggest the importance of several factors relating to social networks and the broader social environment, and more specifically suggest that commonly observed differences in male and female self-employment may be partially explained by differences in social networks between the sexes.2

The hypothesis articulated in Section II proposed that self-employment would be more likely among individuals with relatively more effective social networks. Because characteristics of social networks tend to differ along gender lines, we extended this hypothesis by suggesting that differences in social networks might partially explain differences in self-employment between women and men. In the wake of the empirical analysis, three essential findings emerge. First, with respect to social network composition, a larger network of family members and a greater concentration of failed entrepreneurs in one’s network appear to increase the likelihood of self-employment. Such results are consistent with previous findings which suggested that the most influential source of “material” social support, as distinguished from “emotional” support, was the family. That the result pertaining to the family network holds for men but not for women suggests that women’s strictly larger network of family members, as evidenced from the analysis of means, does not guarantee a significant influence on their selection into self-employment. If, in general, entrepreneurs in one’s social network provide useful information about the entrepreneurial experience, they too could represent a source of material support. The significance of the concentration of failed entrepreneurs in social networks is surprising in that no other type of entrepreneur appears significant, but the result is consistent with the proposition that individuals with entrepreneurial experience may provide more beneficial information than nascent or discouraged entrepreneurs. Meanwhile, the network of friends, thought to be the primary source of emotional support in social networks, never emerges as statistically significant in either the basic model or the gender-separation model. Frequency of contact with entrepreneurs appears unimportant as well. While the size of the network of friends appears relatively unimportant, the empirical analysis yields a noteworthy result relating to the presence of individuals in the social network who have started new firms. On the question of whether men and women in their social networks have started new firms, male and female respondents exhibited no significant difference of opinion when the mean responses were analyzed. However, greater agreement with this proposition as it pertained to male friends was associated with a lesser probability of self-employment, a result that held as significant for both men and women. By contrast, greater agreement with this proposition as it pertained to female friends emerged as a significantly positive indicator of self-employment for women and insignificant for men. For the sample studied, males who have chosen self-employment do not appear to influence their friends, whether male or female, to make the same choice. Females who have chosen self-employment do appear to have influenced their female friends to make this choice. It is possible that a key motivator for female self-employment is the presence of established and presumably supportive female entrepreneurs in their social networks. Finally, there appear to be visible differences by gender with respect to self-employment and the influence of certain aspects of the broader social environment—in particular, cynicism about the source of entrepreneurial success and the support of bankers and investors. In general, when members of a respondent’s social network express a stronger belief that successful entrepreneurs gain success by cheating others, the individual in question is significantly less likely to have chosen self-employment. When examined by gender group, this result holds only for women. A more positive opinion of the support available from bankers and other investors is associated with a greater propensity for self-employment, a result which emerges as robust for men only. These last results may have an implication for the efficiency of entrepreneurial policy. Taken as a whole, the results suggest that female entrepreneurs respond to various social and other nonpecuniary influences in ways that males do not. Were this demonstrated to be the case widely, an implication might be that public policy initiatives designed to encourage entrepreneurial activity, which exist in the U.S. and other nations23 may not be equally effective for men and women. An important part of entrepreneurial assistance for women may involve facilitating direct and quality interaction with other female entrepreneurs—individuals who may be more supportive of and less cynical about self-employment than the associates of the women studied here. Such measures might accompany low-interest loans, tax and legal advice, and other pecuniary measures already provided by most entrepreneurial assistance programs. Are women entrepreneurs unresponsive to the assistance of bankers and other investors because of a negative experience with or reputation about such individuals, or because they are unaware of the existence of such assistance? Learning the answer to this question would also be instructive about the adequacy of policy. Bates 1990, Bauman 1988, Carrington et al 1996, Fairlie and Meyer 1996, Gill 1988 and Mangum and Tansky 1987