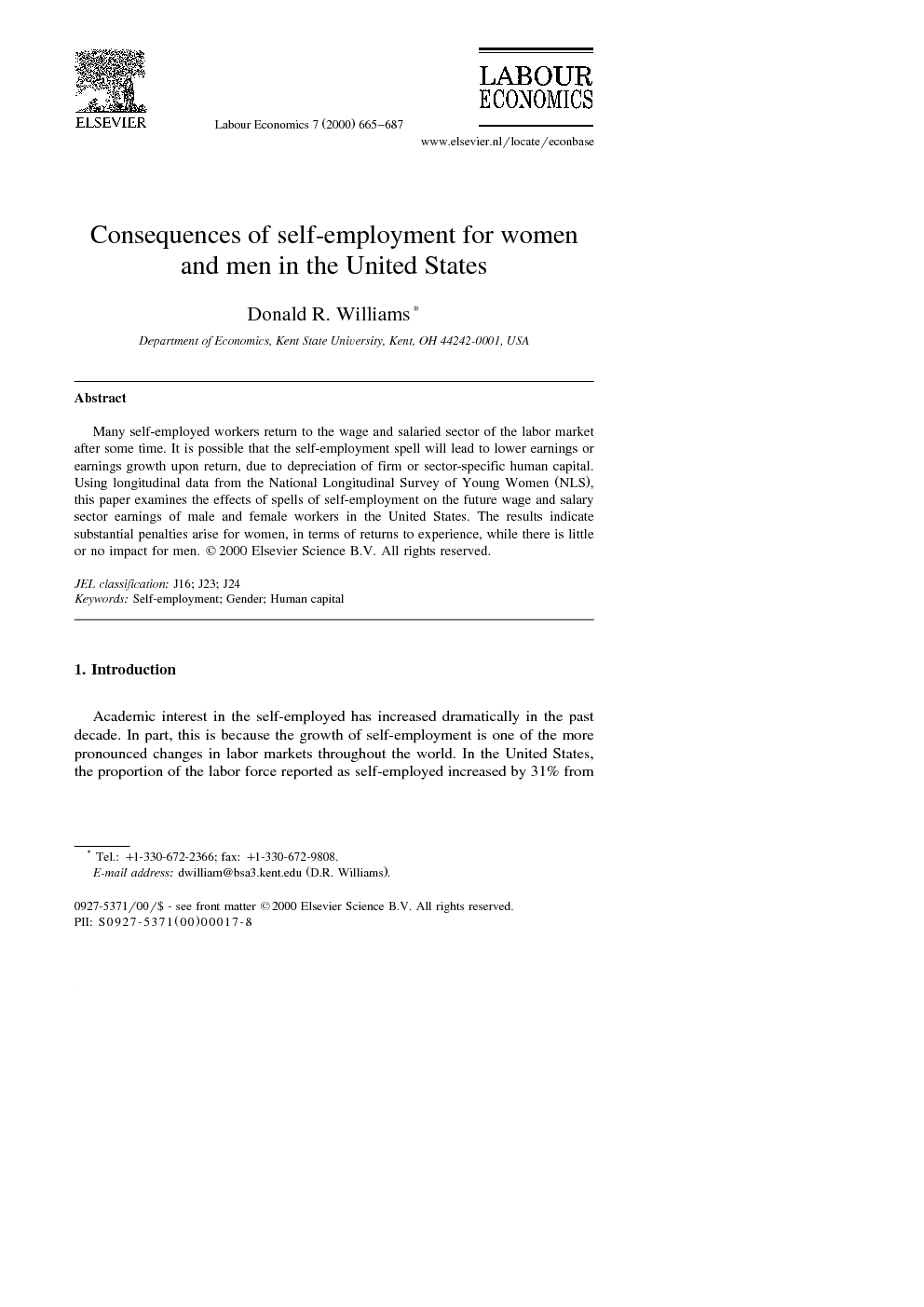 Many self-employed workers return to the wage and salaried sector of the labor market after some time. It is possible that the self-employment spell will lead to lower earnings or earnings growth upon return, due to depreciation of firm or sector-specific human capital. Using longitudinal data from the National Longitudinal Survey of Young Women (NLS), this paper examines the effects of spells of self-employment on the future wage and salary sector earnings of male and female workers in the United States. The results indicate substantial penalties arise for women, in terms of returns to experience, while there is little or no impact for men.

Academic interest in the self-employed has increased dramatically in the past decade. In part, this is because the growth of self-employment is one of the more pronounced changes in labor markets throughout the world. In the United States, the proportion of the labor force reported as self-employed increased by 31% from 1975 to 1990, reversing what had been a long-term downward trend. Currently, approximately 10% of the workforce is engaged in self-employment. Among the self-employed, females represent the fastest growing segment (Devine, 1994a).1 A good deal of research has focused on the question of why workers choose self-employment over “wage and salary” employment, and on the factors that have contributed to the recent trends.2 Some of that research has focused on women or the gender self-employment rate differential Devine, 1994a, Devine, 1994b, Carr, 1996 and Connelly, 1992. In addition, there has been growing interest in “small business” as a source of economic growth in industrialized countries, as well as interest in self-employment as a source of growth in less developed countries (e.g., House, 1993). Self-employment is also viewed by some as a vehicle for exit from poverty, particularly for women and racial minorities, and it is viewed as a viable alternative to unemployment for displaced workers Balkin, 1989 and US Department of Labor, 1992. Consequently, governments worldwide have taken the position that self-employment is to be encouraged, resulting in a wide range of programs to support it. In this context, it is important to ask what are the consequences of self-employment? A common image is of the successful entrepreneur with very high income and rapidly growing wealth. But we know that high proportions of the self-employed return to the wage and salary sector after brief spells. How do they fare upon return? While out of the wage and salary sector, these workers lose potentially valuable labor market experience and opportunities for training or advancement within the firm or industry in which they previously worked. Alternatively, the workers may acquire new skills while self-employed, which yield even greater returns upon re-entry to wage or salary sector employment. In addition to labor–market returns, spells of self-employment could affect future employment probabilities or could lead to significant changes in net assets. Another question is, do the effects differ according to demographic group, in particular by gender, or according to occupation? If the losses associated with self-employment are sufficiently large, or are unique to a particular group of workers, then strategies to promote it may be counterproductive. That is, a worker might be better off with a slightly longer spell of unemployment and subsequent wage and salary sector job, than with a self-employment opportunity that fails. Despite the potentially important consequences of leaving the wage labor market, the question of the impacts of spells of self-employment on workers has not received much attention in the economics literature.3 These and other questions about the consequences of self-employment are the primary focus of the present research. We improve upon previous work by using better measures of self-employment experience, and by allowing the effect of self-employment to differ by occupation. The paper also contributes to our knowledge of male–female differentials in the self-employment experience. Using data from the National Longitudinal Survey Youth Cohort (NLSY) and the National Longitudinal Survey of Young Women (NLS), we find several key results. Foremost, for women the return to self-employment experience is less than the return to wage and salary sector experience. No such evidence is found for men. In addition, the difference in returns does not exist for women in sales occupations. These results hold even when attempting to control for unobserved heterogeneity. The paper is organized as follows: Section 2 gives a brief review of the literature and describes the basic model and relationships to be studied. This is followed by a description of the data and methodology in Section 3. Section 4 presents the results and some extensions. Interpretations of the results are presented in Section 5, followed by topics for further research and conclusions in Section 6.

Self-employment is of growing importance as an alternative for working women. This paper has identified a potential cost to self-employment for women who return to the wage and salary sector, in terms of lower returns to experience. The negative effect of self-employment does not exist for individuals in sales occupations, however; nor is it present for men. This is one of the first papers to address the consequences of self-employment, and so leaves considerable room for further research. First, of course, the estimates presented here could be improved upon with the addition of explanatory variables or the use of alternative methods of controlling for unobserved heterogeneity. The analysis could also be applied to other data sets, such as the NLS Young Men and the Older cohorts. But in addition, the paper raises other questions that should be addressed. Do the results depend on either the reason for choosing self-employment in the first place, or the reason for the return to the wage and salary sector? Perhaps, the two are related, with low ability women who enter self-employment “as a last resort” being those who are most likely to fail. We need further analysis of the determinants of success in self-employment, following the work of Bates (1997) or Blanchflower and Meyer (1994). Further, why is there a negative impact only for women? More information about the occupations chosen by self-employed women and the nature of their work should be explored. The hypothesis that part-time employment among self-employed women is the source of their differential return should be explored. Lastly, do the consequences of self-employment differ by other categories, such as race or ethnicity?17 Answers to these questions are needed before we can fully understand the role and value of self-employment in the US economy.