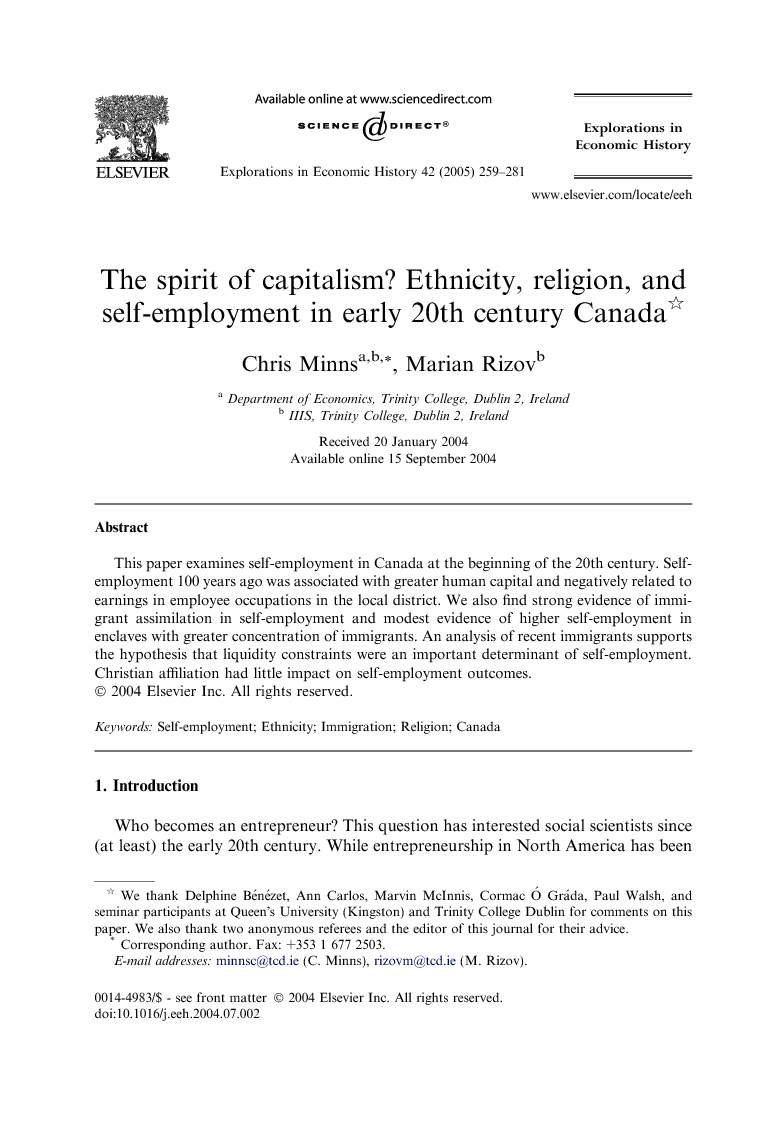 Who becomes an entrepreneur? This question has interested social scientists since (at least) the early 20th century. While entrepreneurship in North America has been of long-standing interest to economists and economic historians, and self-employment rates were higher 100 years ago than today, little is known about the determinants of self-employment in historical labour markets. In this paper, a new sample of the Canadian Census of 1901 is used to analyse self-employment in early 20th century North America. Understanding who became self-employed 100 years ago is an important, and largely unanswered, research question. In the 1940s, Arthur Cole identified entrepreneurship as an area of vital interest for economic historians, with the determinants of entrepreneurial success holding an important place in his proposed research agenda (Cole, 1944, p. 59). While Cole and others were conscious of the importance of “small-scale” self-employment, most of the subsequent research on entrepreneurship in economic history has been qualitative, and focused on the experiences of a number of recognizable captains of industry (Hughes, 1986). Existing quantitative work has examined small samples of entrepreneurs for whom biographical information is available (Sarachek, 1978), or has highlighted the fortunes of particular ethnic groups (Godley, 2001). The Canadian data used in this paper are well suited to an exploration of the microeconomics of self-employment in historical labour markets. An examination of the determinants of self-employment can yield important clues as to how labour markets functioned in the early 20th century. American evidence suggests that self-employment rates were higher in 1910 than during the present day (Fairlie and Meyer, 1996). One explanation for this pattern is that large-scale capital-intensive firms, who offer wages high enough to pull skilled self-employed individuals into paid employment, were less prevalent in early 20th century labour markets (Blau, 1987). An alternative view is that similar to present-day developing economies, high rates of self-employment 100 years ago are indicative of hidden unemployment, through a large informal sector occupied by less-skilled or otherwise disadvantaged workers unable to find stable wage employment. This perspective may be particularly relevant for the large numbers of immigrants arriving in North America in the late 19th and early 20th century, if discrimination and/or an absence of local-specific human capital inhibited employment in organized labour markets. The recent revival of self-employment research among labour economists has explored numerous economic and sociological theories of self-employment. Despite the importance of self-employment in early 20th century labour markets, none of these theories have been properly examined in a historical setting. One area of emphasis has been “push” and “pull” factors, with conditions in local labour markets and human capital characteristics playing key roles in the self-employment decision. Liquidity constraints, which were proposed as a determinant of self-employment shortly after the period under study here (Knight, 1921), have been identified as a key determinant of contemporary self-employment (Evans and Jovanovic, 1989 and Evans and Leighton, 1989). Others have stressed the role of ethnicity in determining who becomes an entrepreneur.1 Like the United States, Canada has been a major immigrant-receiving country for over a century, but the ethnic composition of the Canadian population at the end of the 19th century was quite different, with over 70% of the stock of Canadian immigrant men in 1901 having arrived from Britain and Ireland.2 While the Canadian population was less diverse, in terms of ethnic origin, than that of the United States, scholars of the period are divided as to the role of nativity and religion in shaping occupational outcomes. Numerous historians have argued that English-speaking immigrants, particularly those from England and Scotland, were able to integrate seamlessly into Canadian (and American) labour markets (Erickson, 1972, Lower, 1946 and Reynolds, 1935). Other writers have pointed to the importance of ethnic, and especially religious, differences within Canada’s predominantly British immigrant population (Akenson, 1988 and Porter, 1965). The link between religion and self-employment is also at the heart of one of the classic perspectives on entrepreneurship. In his essay “the Protestant sects and the spirit of capitalism,” Max Weber argued that a close link exists between religious affiliation and capitalist achievement (Weber, 2001). The writings of one of the leading Canadian sociologists of the mid-20th century suggest that the pattern Weber observed was not exclusive to the United States. In The vertical mosaic(1965), John Porter argued that strong ties between membership in Protestant sects, ethnicity, and entrepreneurial capitalism were present in early 20th century Canada. The stylized facts reported by Weber and Porter are based largely on observations of select samples of ”captains of industry” in the United States and Canada. Do their hypotheses hold up to a micro-level examination of entrepreneurship in the general population? The 1901 Census of Canada will allow us to answer this question, as, unlike in the United States, the Canadian authorities asked respondents to report their religious affiliation.