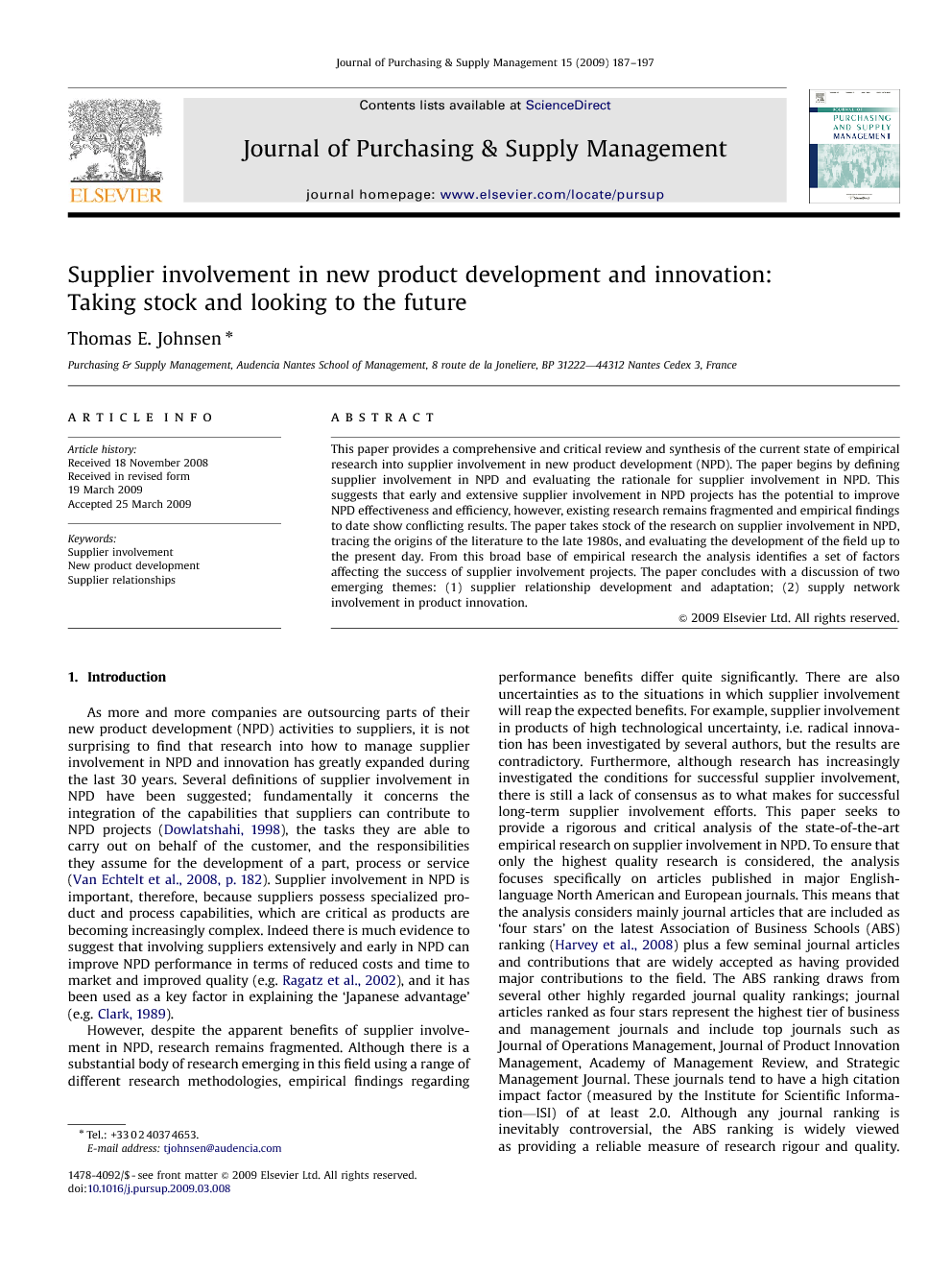 As more and more companies are outsourcing parts of their new product development (NPD) activities to suppliers, it is not surprising to find that research into how to manage supplier involvement in NPD and innovation has greatly expanded during the last 30 years. Several definitions of supplier involvement in NPD have been suggested; fundamentally it concerns the integration of the capabilities that suppliers can contribute to NPD projects (Dowlatshahi, 1998), the tasks they are able to carry out on behalf of the customer, and the responsibilities they assume for the development of a part, process or service (Van Echtelt et al., 2008, p. 182). Supplier involvement in NPD is important, therefore, because suppliers possess specialized product and process capabilities, which are critical as products are becoming increasingly complex. Indeed there is much evidence to suggest that involving suppliers extensively and early in NPD can improve NPD performance in terms of reduced costs and time to market and improved quality (e.g. Ragatz et al., 2002), and it has been used as a key factor in explaining the ‘Japanese advantage’ (e.g. Clark, 1989). However, despite the apparent benefits of supplier involvement in NPD, research remains fragmented. Although there is a substantial body of research emerging in this field using a range of different research methodologies, empirical findings regarding performance benefits differ quite significantly. There are also uncertainties as to the situations in which supplier involvement will reap the expected benefits. For example, supplier involvement in products of high technological uncertainty, i.e. radical innovation has been investigated by several authors, but the results are contradictory. Furthermore, although research has increasingly investigated the conditions for successful supplier involvement, there is still a lack of consensus as to what makes for successful long-term supplier involvement efforts. This paper seeks to provide a rigorous and critical analysis of the state-of-the-art empirical research on supplier involvement in NPD. To ensure that only the highest quality research is considered, the analysis focuses specifically on articles published in major English-language North American and European journals. This means that the analysis considers mainly journal articles that are included as ‘four stars’ on the latest Association of Business Schools (ABS) ranking (Harvey et al., 2008) plus a few seminal journal articles and contributions that are widely accepted as having provided major contributions to the field. The ABS ranking draws from several other highly regarded journal quality rankings; journal articles ranked as four stars represent the highest tier of business and management journals and include top journals such as Journal of Operations Management, Journal of Product Innovation Management, Academy of Management Review, and Strategic Management Journal. These journals tend to have a high citation impact factor (measured by the Institute for Scientific Information—ISI) of at least 2.0. Although any journal ranking is inevitably controversial, the ABS ranking is widely viewed as providing a reliable measure of research rigour and quality. The implications of focusing on these particular journals are discussed at the end of the paper.