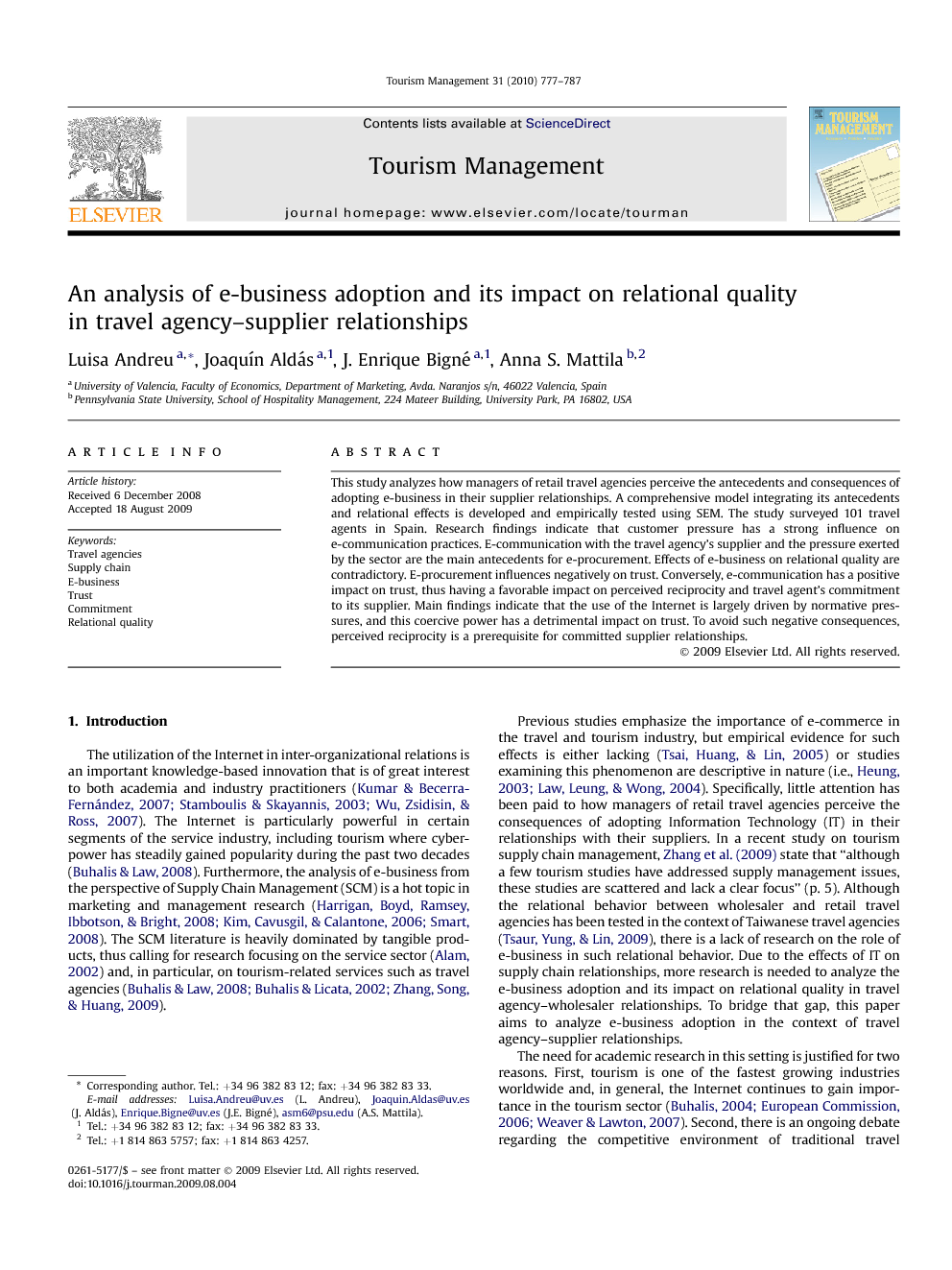 This study analyzes how managers of retail travel agencies perceive the antecedents and consequences of adopting e-business in their supplier relationships. A comprehensive model integrating its antecedents and relational effects is developed and empirically tested using SEM. The study surveyed 101 travel agents in Spain. Research findings indicate that customer pressure has a strong influence on e-communication practices. E-communication with the travel agency's supplier and the pressure exerted by the sector are the main antecedents for e-procurement. Effects of e-business on relational quality are contradictory. E-procurement influences negatively on trust. Conversely, e-communication has a positive impact on trust, thus having a favorable impact on perceived reciprocity and travel agent's commitment to its supplier. Main findings indicate that the use of the Internet is largely driven by normative pressures, and this coercive power has a detrimental impact on trust. To avoid such negative consequences, perceived reciprocity is a prerequisite for committed supplier relationships.

This study focused on two different adoption levels of e-business (i.e., online communication and e-procurement). Based on Lin and Lee (2005) framework, the former is an initial step used to communicate between firms, while e-procurement reflects a higher integration of business processes. In the context of travel agency–supplier relationships, our results indicate that the adoption of online communication has a positive influence on using the Internet for making reservations and procuring e-tickets. This research also analyzes external drives that enhance e-business adoption in travel agency–supplier relationships. Our findings highlight the importance of two main external factors: perceived customer and normative pressures. As hypothesized, online enabled customers are the main antecedent of online communications. Travel agents surveyed in this study indicated that their customers expect them to employ e-business practices in supplier relationships. If travel agencies do not implement e-business for communication with their suppliers, they could not be able to offer some services to their clients (i.e., online tickets, booking codes, etc.) and, therefore, consumers may prefer other providers. Conversely, normative pressures are the main driver of e-procurement. Retail travel agents are largely forced into using the Net for e-procurement. According to the 2006 e-Business Survey (European Commission, 2006), travel agencies and tour operators are ‘heavy’ users of e-procurement compared to other tourism sub-sectors such as lodging. Most travel agents seem to adopt e-procurement in order to avoid isolation from their suppliers. Consistent with previous research (Cross and Smith, 1996 and Gounaris, 2005), investment in technology for communication and e-procurement may generate structural bonds among partners, thus enhancing relational quality (trust and commitment). Our results show a direct relationship between e-communication adoption and trust towards the travel supplier. Similar to an online banking context (Mukherjee & Nath, 2003), the adoption of Internet for communication with travel suppliers is a valuable resource for promoting trust. However, our findings indicate that the influence of e-procurement on trust is negative. As mentioned earlier, the use of the Net is imposed by normative pressures, and this coercive power might have a negative impact on trust. Due to the fragmented nature of the industry and competition among travel agencies, the adoption of e-procurement is largely driven by pressure from the suppliers. This dependency might lead to a perceived loss of control from the travel agent's perspective. Perceived loss of control has a negative effect on user satisfaction (Lee & Park, 2008), thus shedding some light into the negative relationship between e-procurement and trust. Although previous research considers trust as one of the main antecedents of commitment, this relationship was insignificant in the present study. Drawing from social exchange theory, commitment is based on an assumption that the other party will not perform opportunistically (Kingshott & Pecotich, 2007). However, consistent with previous research findings, a coercive atmosphere (i.e., the use of the Internet imposed by normative pressures) may explain the lack of direct relationship between trust and commitment. For example, Lee and Park (2008) show, in the context of alcoholic beverage wholesaler, that under mandatory adoption, the perceived loss of control has a negative effect on user satisfaction with the relationship. Finally, our results demonstrate the need to increase the level of perceived reciprocity in enhancing supplier relationships. In the context of travel agency–wholesaler relationships, trust in the wholesaler professionalism is not enough to impact on commitment to the travel supplier (wholesaler). Our findings indicate an indirect relationship between trust and commitment through perceived reciprocity.