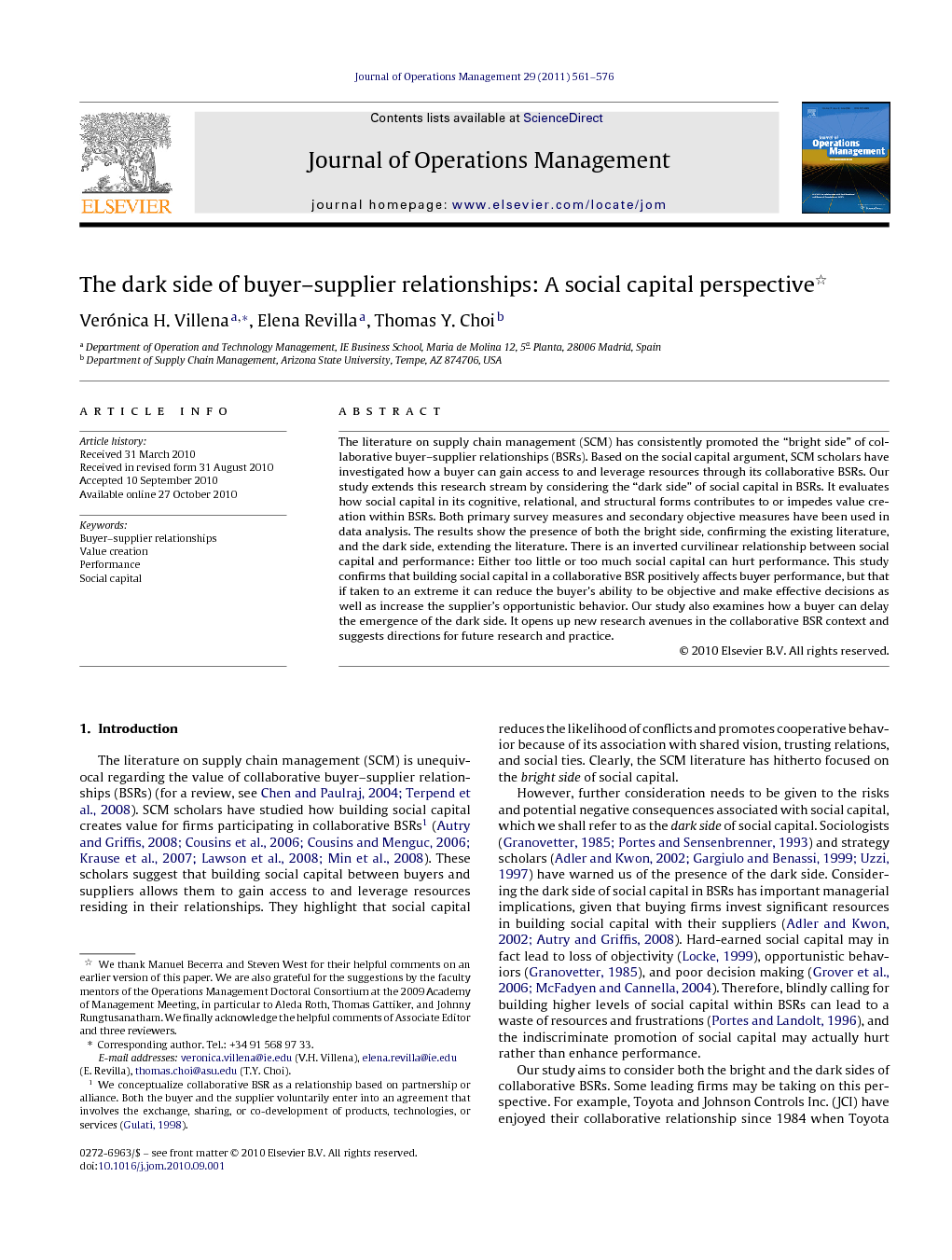 The literature on supply chain management (SCM) has consistently promoted the “bright side” of collaborative buyer–supplier relationships (BSRs). Based on the social capital argument, SCM scholars have investigated how a buyer can gain access to and leverage resources through its collaborative BSRs. Our study extends this research stream by considering the “dark side” of social capital in BSRs. It evaluates how social capital in its cognitive, relational, and structural forms contributes to or impedes value creation within BSRs. Both primary survey measures and secondary objective measures have been used in data analysis. The results show the presence of both the bright side, confirming the existing literature, and the dark side, extending the literature. There is an inverted curvilinear relationship between social capital and performance: Either too little or too much social capital can hurt performance. This study confirms that building social capital in a collaborative BSR positively affects buyer performance, but that if taken to an extreme it can reduce the buyer's ability to be objective and make effective decisions as well as increase the supplier's opportunistic behavior. Our study also examines how a buyer can delay the emergence of the dark side. It opens up new research avenues in the collaborative BSR context and suggests directions for future research and practice.

The literature on supply chain management (SCM) is unequivocal regarding the value of collaborative buyer–supplier relationships (BSRs) (for a review, see Chen and Paulraj, 2004 and Terpend et al., 2008). SCM scholars have studied how building social capital creates value for firms participating in collaborative BSRs1 (Autry and Griffis, 2008, Cousins et al., 2006, Cousins and Menguc, 2006, Krause et al., 2007, Lawson et al., 2008 and Min et al., 2008). These scholars suggest that building social capital between buyers and suppliers allows them to gain access to and leverage resources residing in their relationships. They highlight that social capital reduces the likelihood of conflicts and promotes cooperative behavior because of its association with shared vision, trusting relations, and social ties. Clearly, the SCM literature has hitherto focused on the bright side of social capital. However, further consideration needs to be given to the risks and potential negative consequences associated with social capital, which we shall refer to as the dark side of social capital. Sociologists ( Granovetter, 1985 and Portes and Sensenbrenner, 1993) and strategy scholars ( Adler and Kwon, 2002, Gargiulo and Benassi, 1999 and Uzzi, 1997) have warned us of the presence of the dark side. Considering the dark side of social capital in BSRs has important managerial implications, given that buying firms invest significant resources in building social capital with their suppliers ( Adler and Kwon, 2002 and Autry and Griffis, 2008). Hard-earned social capital may in fact lead to loss of objectivity (Locke, 1999), opportunistic behaviors (Granovetter, 1985), and poor decision making ( Grover et al., 2006 and McFadyen and Cannella, 2004). Therefore, blindly calling for building higher levels of social capital within BSRs can lead to a waste of resources and frustrations (Portes and Landolt, 1996), and the indiscriminate promotion of social capital may actually hurt rather than enhance performance. Our study aims to consider both the bright and the dark sides of collaborative BSRs. Some leading firms may be taking on this perspective. For example, Toyota and Johnson Controls Inc. (JCI) have enjoyed their collaborative relationship since 1984 when Toyota first arrived in Georgetown, KY, to produce the all-time best selling Camry sedans (www.johnsoncontrol.com). However, presently, they appear to be re-evaluating their celebrated long-term, collaborative relationship. There have been signs of restructuring in their relationship. Toyota and JCI are phasing out a long-standing partnership at Trim Masters, their joint-venture company (www.autonews.com). With this measure, Toyota seems to be looking for more competition among seat suppliers while JCI seems to be pursuing more autonomy to explore other potential customers and ventures. Both firms seem to be acknowledging the downside of their long-term partnership. Our study aims to investigate the underlying dynamics of such a phenomenon—how a well-established BSR, on the one hand, generates value (the bright side) but, on the other, causes relational inertia (the dark side) that inhibits partners’ capacity to meet changing market demands. We take the SCM literature beyond the bright side of collaborative BSRs by considering the bright side and dark side in a single model. We do so theoretically and empirically by using the concept of social capital. Consistent with previous studies (e.g., Krause et al., 2007 and Lawson et al., 2008), we accept that building social capital within BSRs has a positive impact on buyer performance, at least initially. However, we offer additional theoretical precision to this argument. We posit that the synergies emerging from accumulated social capital are subject to diminishing returns. That is, the value of social capital might begin to decay and the rate of benefits slow down as inherent risks and costs of social capital increase. As a result, we postulate that the accumulation of social capital improves performance up to a point where increasing risks and costs offset the benefits and that beyond this point buyer performance declines. We thus suggest that the relationship between social capital and performance has a curvilinear rather than a linear effect. This curvilinear relationship might also explain why some studies analyzing collaborative mechanisms in BSRs have been unable to show the expected performance gains (Gulati and Sytch, 2007, Petersen et al., 2005 and Swink et al., 2007). Further, previous studies have limited the analysis of social capital to its relational dimension (Cousins et al., 2006 and Johnston et al., 2004), structural dimension (Capaldo, 2007), or a combination of the two (Autry and Griffis, 2008 and Lawson et al., 2008). Very few studies have investigated all three forms of social capital (Nahapiet and Ghoshal, 1998) in a single model, with the notable exception of Krause et al. (2007). The current study jointly examines three forms of social capital—cognitive (e.g., shared culture and goals), relational (e.g., trust, friendship, respect, and reciprocity), and structural (e.g., social ties), thereby addressing the different ways these forms influence performance outcomes. Also, most previous studies have framed the benefits of social capital primarily within a narrow range of operational performance outcomes. However, in reality, buyers attempt to advance a much wider range of performance goals within their BSRs (Krause et al., 2007, Sanders, 2008 and Im and Rai, 2008). Our study thus considers a set of strategic benefits (e.g., the development of new products and markets) in addition to operational performance measures used in previous studies. In doing so, we provide a more comprehensive examination of a buyer's performance gain based on the building of social capital with its collaborative supplier. The paper is organized as follows. We first review the literature on social capital and performance, and then we develop hypotheses based on how the three dimensions of social capital impact performance. The unit of analysis is framed as the buyer–supplier dyad. The research methodology section discusses how objective and subjective data from 132 Spanish firms were collected and analyzed. The results confirm that there is an inverted curvilinear relationship between social capital and performance. The results also show that it takes longer to reach the threshold when buyers and suppliers work together to achieve strategic benefits compared with when they seek operational benefits. Finally, we discuss theoretical and managerial implications and offer future research directions.