عنوان انگلیسی
A note on JIT purchasing vs. EOQ with a price discount: An expansion of inventory costs
دانلود فوری مقاله + سفارش ترجمه 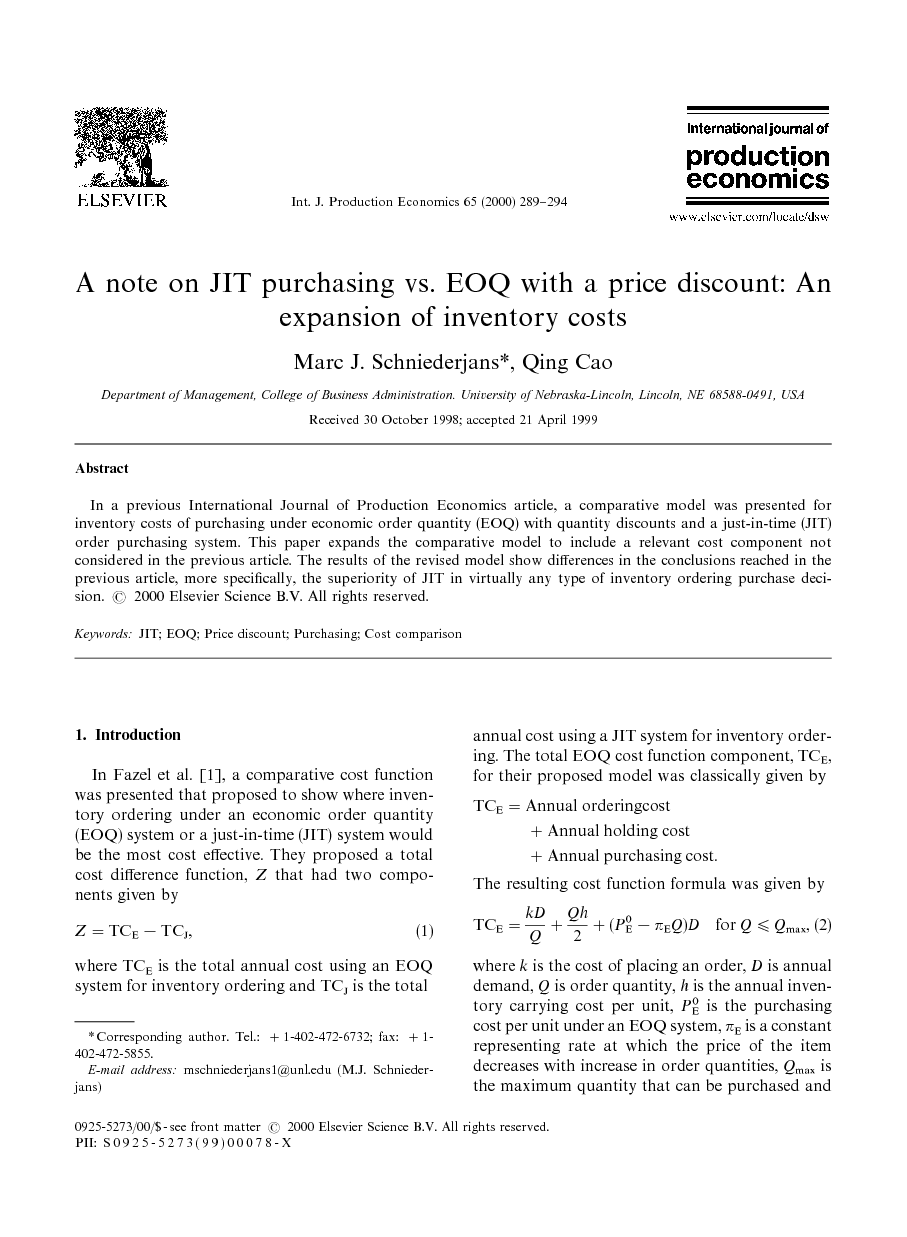 In a previous International Journal of Production Economics article, a comparative model was presented for inventory costs of purchasing under economic order quantity (EOQ) with quantity discounts and a just-in-time (JIT) order purchasing system. This paper expands the comparative model to include a relevant cost component not considered in the previous article. The results of the revised model show differences in the conclusions reached in the previous article, more specifically, the superiority of JIT in virtually any type of inventory ordering purchase decision.

In Fazel et al. [1], a comparative cost function was presented that proposed to show where inventory ordering under an economic order quantity (EOQ) system or a just-in-time (JIT) system would be the most cost effective. They proposed a total cost difference function, Z that had two components given by equation(1) where TCE is the total annual cost using an EOQ system for inventory ordering and TCJ is the total annual cost using a JIT system for inventory ordering. The total EOQ cost function component, TCE, for their proposed model was classically given by The resulting cost function formula was given by equation(2) where k is the cost of placing an order, D is annual demand, Q is order quantity, h is the annual inventory carrying cost per unit, P0E is the purchasing cost per unit under an EOQ system, πE is a constant representing rate at which the price of the item decreases with increase in order quantities, Qmax is the maximum quantity that can be purchased and still receive a quantity discount whose rate is πE. Taking the derivative of Eq. (2) with respect to Q, the resulting optimal order quantity, Q∗, is equation(3) For order quantities above Qmax the minimum quantity purchase price of PminE remains constant and the TCE function becomes equation(4) Taking the derivative of Eq. (4) with respect to Q, the resulting optimal order quantity, Q∗∗, is equation(5) The JIT total cost function, TCJ, for the proposed JIT portion of the model in Eq. (1), was limited to just the annual purchasing cost component in Eq. (2). The JIT total cost function is given by equation(6) where PJ is the product unit price under a JIT system. Here they assumed, based on their personal experience with JIT and a brief literature review [2], that the annual ordering costs and the annual holding costs where either negligible or transferred to suppliers, thereby being incorporated into the annual purchasing cost component of the function. Since EOQ or large lot operations usually avail themselves of the quantity discount advantage, the focus of Fazel et al. [1] was on developing cost functions that would show where EOQ and JIT operations would be the least cost strategy. Specifically, a cost function that was valid for Q⩽Qmax. The authors accomplished this by developing a total cost-difference function, Z, by substituting Eqs. (2) and (3) into Eq. (1), to derive

In this paper, a previous mathematical model was expanded to more fairly represent the realistic JIT cost environment that manufacturers face when implementing a JIT order purchasing system. This addition involved the consideration of the cost savings caused by the reduced square footage in facilities that adopt a JIT ordering system. This study finds that by including the reduced square footage cost-advantage to the JIT side of the comparison model, a JIT system is preferable to an EOQ system for manufacturers whose annual demand is at fairly low levels. The results of the example problem have also shown that the cost indifference point between the two systems occurs at a demand level so substantially large that it would also always require a substantial additional cost in plant facilities. Such an additional cost would again result in a favoring of the JIT system. Also, at such high levels of demand, JIT manufacturers will almost always qualify for PminE discounted price per unit, resulting in still further cost advantages in favor of a JIT system. It is our conclusion that a JIT ordering system is preferable to an EOQ system at any level of annual demand and with almost any cost structure. As Fazel, Fischer and Gilbert [1] and others [13] have pointed out, the theoretical nature of the economic costing models do not consider many of the other advantages and disadvantages that a JIT system can offer its users. Flexibility, quality and a host of other advantages are common place in JIT systems. And while these advantages can decrease manufacturing costs, other disadvantages, like stock outs caused by a JIT ordering policy can add to the costs. These cost considerations may impact, to a greater or lesser degree, for different manufacturers and, therefore, represent a limitation on the results of this paper.