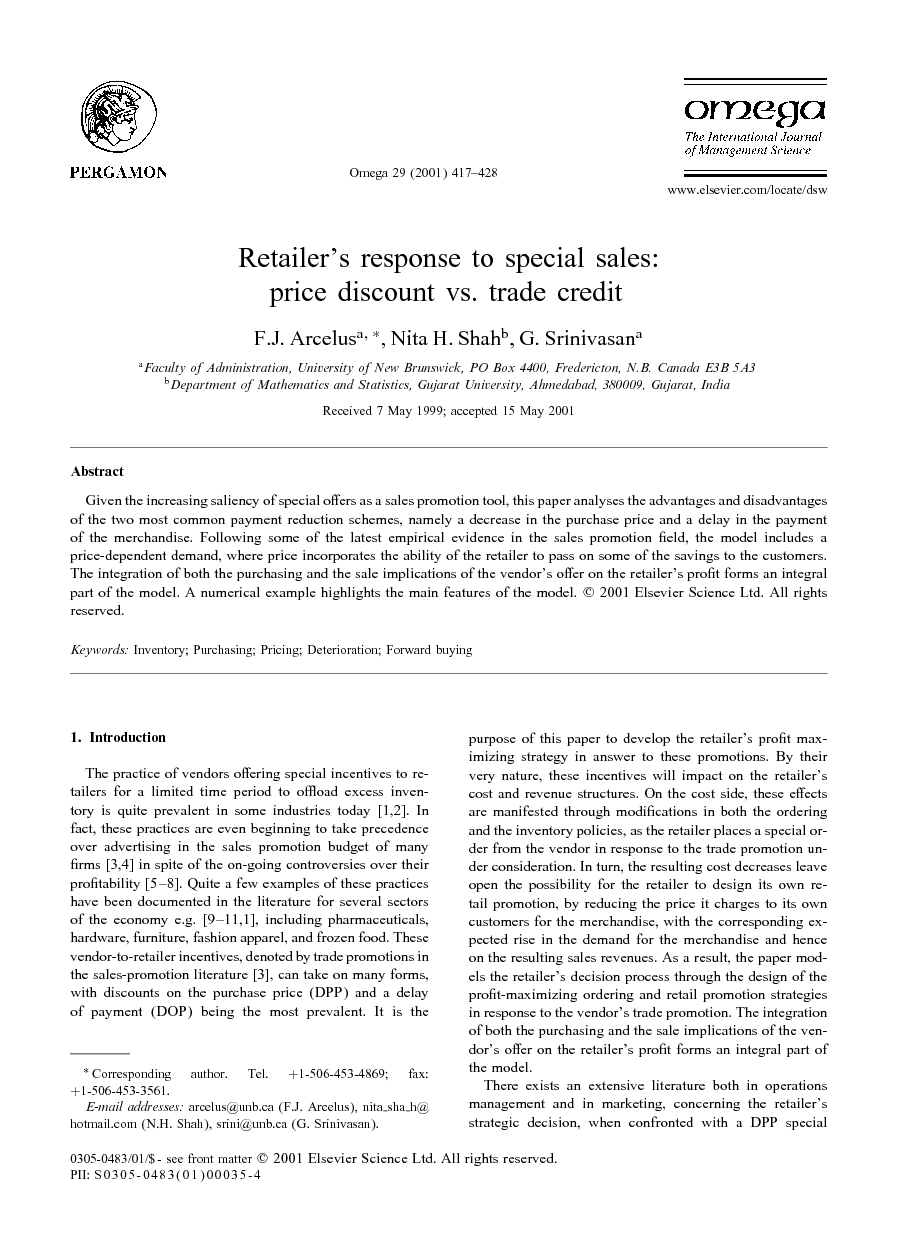 Given the increasing saliency of special offers as a sales promotion tool, this paper analyses the advantages and disadvantages of the two most common payment reduction schemes, namely a decrease in the purchase price and a delay in the payment of the merchandise. Following some of the latest empirical evidence in the sales promotion field, the model includes a price-dependent demand, where price incorporates the ability of the retailer to pass on some of the savings to the customers. The integration of both the purchasing and the sale implications of the vendor's offer on the retailer's profit forms an integral part of the model. A numerical example highlights the main features of the model.

The practice of vendors offering special incentives to retailers for a limited time period to offload excess inventory is quite prevalent in some industries today [1] and [2]. In fact, these practices are even beginning to take precedence over advertising in the sales promotion budget of many firms [3] and [4] in spite of the on-going controversies over their profitability [5], [6], [7] and [8]. Quite a few examples of these practices have been documented in the literature for several sectors of the economy e.g. [9], [10], [11] and [1], including pharmaceuticals, hardware, furniture, fashion apparel, and frozen food. These vendor-to-retailer incentives, denoted by trade promotions in the sales-promotion literature [3], can take on many forms, with discounts on the purchase price (DPP) and a delay of payment (DOP) being the most prevalent. It is the purpose of this paper to develop the retailer's profit maximizing strategy in answer to these promotions. By their very nature, these incentives will impact on the retailer's cost and revenue structures. On the cost side, these effects are manifested through modifications in both the ordering and the inventory policies, as the retailer places a special order from the vendor in response to the trade promotion under consideration. In turn, the resulting cost decreases leave open the possibility for the retailer to design its own retail promotion, by reducing the price it charges to its own customers for the merchandise, with the corresponding expected rise in the demand for the merchandise and hence on the resulting sales revenues. As a result, the paper models the retailer's decision process through the design of the profit-maximizing ordering and retail promotion strategies in response to the vendor's trade promotion. The integration of both the purchasing and the sale implications of the vendor's offer on the retailer's profit forms an integral part of the model. There exists an extensive literature both in operations management and in marketing, concerning the retailer's strategic decision, when confronted with a DPP special sale. On the operations management side, the basic formulation of Baker [12] appears in many textbooks on the subject, such as in Tersine [13]. Many other studies have attempted to adapt Baker's model [12] to handle model concerns. Examples of this work include Ardalan [14], to incorporate discount periods not coinciding with the replenishment cycle and Arcelus and Srinivasan [15], to consider cases where the retailer's special purchase is large enough to encompass several no-discount ordering cycles. Most of this extensive operations management literature has been reviewed elsewhere [16] and [17]. A common assumption of the majority of these studies is that of a constant demand, independent of sales-price fluctuations. Hence, the buyer/retailer's ability to influence demand by passing on at least some of the discount to its customers has been ignored, with the exceptions of those studies [18], [16] and [19] which incorporate the price/demand relation. An important contribution of Ardalan [19] is to show that the usual formulation of the constant demand case, designed to decide whether the special offer should be accepted or rejected, is no longer relevant when the demand is price dependent, since the acceptance option is always dominant. However, the models use the limited strategy of passing on the entire discount on all the units bought in the special sale, even though the marketing evidence clearly indicates e.g. [20], [21], [22], [23] and [3] that this is not necessarily the case. With respect to the shape of the demand function, the operations management literature favours the linear demand, as a convenient two-term Taylor approximation to the more complex and more theoretically appealing exponential counterpart [24], with its constant price elasticity of demand. The marketing literature has gone much further in the characterization of DPP behaviour, specially as it refers to the implications of the functional demand form, be it linear or non-linear, on channel behaviour e.g. [6], [8], [22], [23] and [25]. Nevertheless, it is also common practice e.g. [4], for wholesalers to resort to the alternate strategy of allowing credit, instead of discount, to induce larger orders, especially when the fear of competitive reaction to a DPP policy is high [26], [27], [28] and [29]. However, the fact that a DOP policy conveys a new benefit to the retailer, for whom it may be beneficial to pass on at least a portion of it to its customers to induce a higher demand level, has not yet been addressed. In an attempt to bridge this gap, the present study considers both the DPP and the DOP options for a profit maximizing retailer with a price-dependent demand. The basic model for both options is presented in the next section, together with the derivation of the optimality conditions. In accordance with the empirical evidence alluded to earlier, the model considers the optimal determination of the amount of discount to be passed on to the customers and the quantity eligible for such a discount. This is followed in Section 3 by an analytical and numerical comparison of the resulting policies. Conclusions given in Section 5 completes the paper.

Several managerial implications may be extracted from the modelling, the properties and the numerical example of this study. Given the proliferation of payment reduction schemes designed to induce larger orders, it is important for the retailer to be able to assess their monetary impact and to compare the profitability of these sale promotion tools, under realistic conditions linking marketing as well as operations management concerns. The integration of the purchasing, inventory and sale implications of the vendor's offer on the retailer's profit forms an integral part of the study. At the modelling side, the first linkage is the use of the price-dependent demand, so common in marketing but basically ignored in the inventory literature. Further, the model is valid for the general demand form defined in (1), which substantially enhances the range of applicability of the DOP/DPP comparisons. The second takes into consideration the well-known marketing fact e.g. [20], [3] and [22] that the value of retailer pass-through on the retailer's own customers varies widely. Our modelling of this evidence is through the use of (Pj,qj) as decision variables. Pj determines the portion of the discount to be passed on. An additional form of forward buying is related to Qj−qj, the portion of the retailer's special offer to be sold by the retailer to its own customers under a retail promotion. A third linkage consists of the introduction of the inventory component, ordering and holding costs, normal in the operations management literature. The fourth linkage is the incorporation of the DOP option, another popular sales promotion tool [4] into this structure, which in turn requires (i) a decomposition of inventory holding costs into physical and financial, with different cost drivers; and (ii) a common planning horizon for the comparison among models. Properties 2–4 also provide important linkages to observed marketing practice, as they present evidence of the profitability of discount pass-throughs (P2) and of larger one-time-only purchases on the part of the retailer (P3), together with the conditions under which the DPP option dominates (P4). Additional managerial implications are reflected in the numerical example which in turn provide some sort of empirical validation for the model of this paper. Included here are: (i) the profitability of price-induced demand changes on the retailer's part; (ii) the larger variability of quantities rather than of prices to forestall or at least minimize adverse short-term competitive reactions, when the retailer is faced with changes in the special financial incentives; (iii) the difficulty of trading off a DOP offer for an equally beneficial DPP counterpart; (iv) the positive (negative) relationship between the retailer's pass-through rate and the length of the retailer's (wholesaler's) promotional period. It is clear from this study that there does not exist a one-to-one linear correspondence between DPP and DOP optimal policies. Hence, any possible tradeoff between them implies different order and pricing strategies, which are difficult to determine without solving each problem individually. This adds substantially to the complexity of the decision process and suggests additional analysis to fully characterize such tradeoff. Scanbacks e.g. [20], whereby compensation is based on actual performance as measured by scanner data, are being used with increasing frequency by manufacturers to control retail pass-through. The extent to which these pay-for-performance trade deals may alter the incentive structure merits further investigation. Another issue of interest is the effect of changing a product's demand on other potential products in a retailer's assortment. Placing the model within a multi-product framework allows for the inclusion of loss leaders into the formulation and for the study of the complementary/substitutability effects of these promotion practices [3]. Another unresolved issue of managerial importance is whether the demand will be lower in the post-incentive period. The empirical evidence on this point is contradictory [3]. A resolution of this dispute will help to elucidate the nature of the post-discount demand effect, so that it can be incorporated into the model. Finally, problems related to uncertainty e.g. [32] and [21], such as stochastic demand, stochastic deal timing and the expectation of future deals, may also affect the comparability of the two options. The study of these and other issues justify additional research.