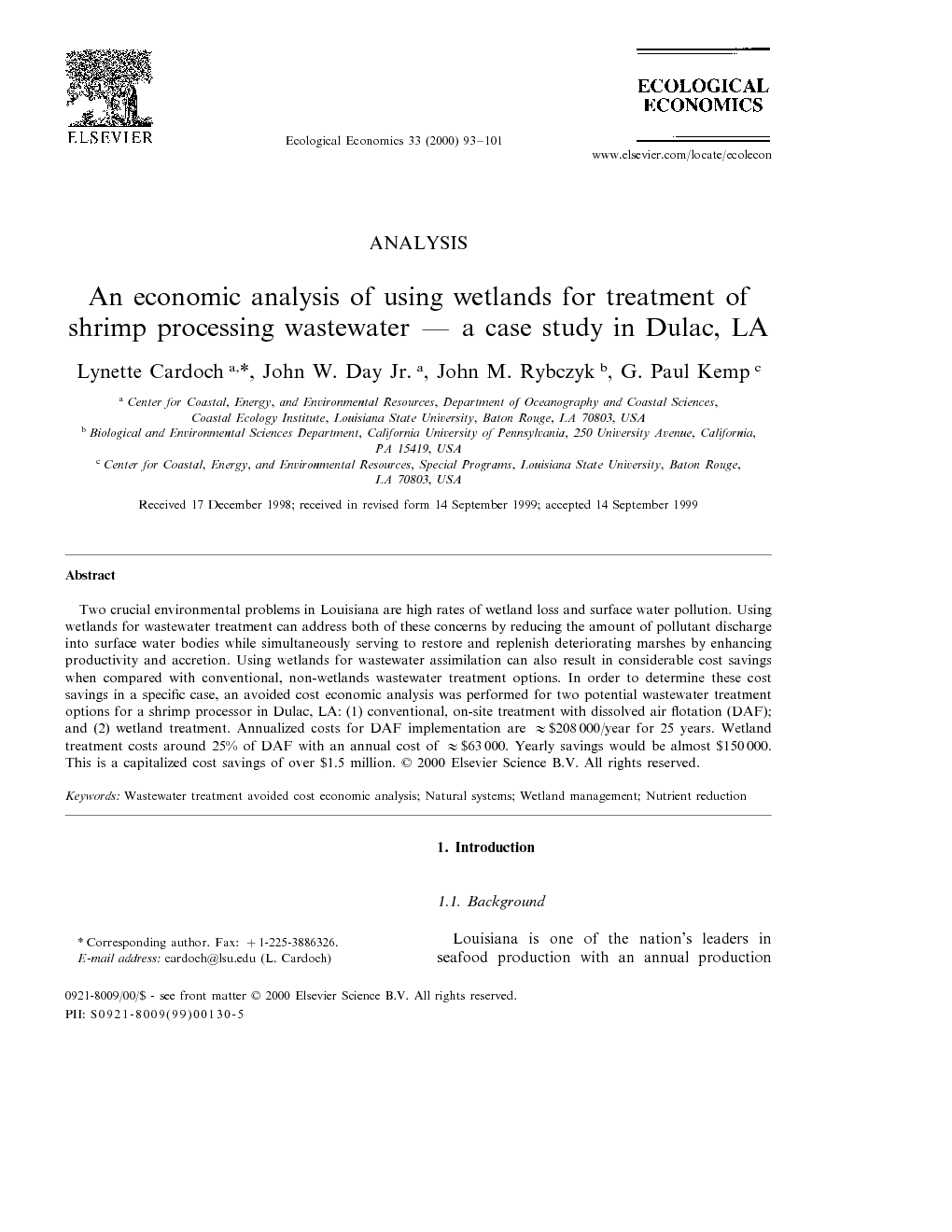 Two crucial environmental problems in Louisiana are high rates of wetland loss and surface water pollution. Using wetlands for wastewater treatment can address both of these concerns by reducing the amount of pollutant discharge into surface water bodies while simultaneously serving to restore and replenish deteriorating marshes by enhancing productivity and accretion. Using wetlands for wastewater assimilation can also result in considerable cost savings when compared with conventional, non-wetlands wastewater treatment options. In order to determine these cost savings in a specific case, an avoided cost economic analysis was performed for two potential wastewater treatment options for a shrimp processor in Dulac, LA: (1) conventional, on-site treatment with dissolved air flotation (DAF); and (2) wetland treatment. Annualized costs for DAF implementation are ≈$208 000/year for 25 years. Wetland treatment costs around 25% of DAF with an annual cost of ≈$63 000. Yearly savings would be almost $150 000. This is a capitalized cost savings of over $1.5 million.

An ecological analysis conducted at the site (Day et al., 1998) indicates that the area is suitable for wastewater treatment and would benefit from it. Thus coupled with the substantial economic savings, a pilot wetland treatment study in Dulac is recommended to treat shrimp processing waste. When the regulatory authorities change current discharge permit requirements to mandate more stringent handling of the wastes, this project presents shrimp processors with a cost-effective option. Such a project can serve as a model for many of the other seafood processors in Louisiana, as well as in other Gulf of Mexico states. Many small communities are facing similar waste disposal problems. With the abundance of impounded or isolated wetlands in the coastal zone, wetland treatment can be a viable, cost effective option for these small communities and industrial processors. The Coastal Ecology Institute developed a wastewater treatment manual (Day and Sutula, 1998) that provides interested planners and processors with guidance on how to determine the feasibility of wastewater treatment. It can be accessed on the Internet by visiting the Coastal Ecology Institute's web site at: http://www.lsu.edu/guests/wwwcei/wastewaterguide/Wetman.html